Those of you who have had the pleasure of meeting my husband Mike, either in person or via one of GameCola’s famous podcasts, have probably figured out by now that he is a bit of a talker.

These days, his favorite subject is the Mass Effect series. He’s been holding off on playing Mass Effect 3 for the past few weeks due to his fear of programming bugs, so while waiting for the first round of patches to come out, he has been replaying the first two games in the series. Playing, and—of course—talking about them at length.

By now, I’m pretty used to this kind of thing; heck, I have probably experienced more videogames vicariously this way than I have actually played on my own. However, I recently had a very interesting realization about the “Mike Sez” method of gaming, which is that whenever Mike talks about a videogame, he tends to focus only on the parts that are most interesting to him. This means that I hear a lot about certain aspects of the game, and very little about others. For example, I could probably name most of the major party members of the first two Mass Effect games (Mike is very big on character development), but I have almost no real concept of the plot. I know there is something about a Genophage and the revolt of the Geth and Shepard pulling a Lazarus; not much else, though. It therefore occurred to me that the picture I have in my head of what this game is about probably bears very little resemblance to the actual game.

In the interest of developing my creative thinking skills, I then decided that it might be fun to take this notion a step further and create my own summary of Mass Effect, based solely on the information I have gleaned through my conversations with Mike and the inferences I have extrapolated from said data. I leave it to those of you who have actually played the games to tell me how crazily off I am. However, I have a sneaking suspicion that I will probably still like my version better.

So, without further ado, here goes:

OK, so basically, there is this whole galaxy full of different races, each of whom have very different traits and motives, and they are all constantly at war with each other through a series of spectacularly unfortunate misunderstandings. Commander Shepard—whose name in no way has any Christian allegorical undertones—is a human soldier bent on spreading his (or her) message of peace and harmony throughout the galaxy, by any means necessary. Unfortunately, he dies in battle for his trouble, and in a moment that is, OK, vaguely reminiscent of the Christian resurrection, he is brought back to life and becomes a huge celebrity. After that, Shepard—OK, fuck it, I’m just going to call him Shepard-Jesus from now on—anyway, Shepard-Jesus and his team of eccentric multi-ethnic peacekeepers then continue travelling around the galaxy, doing good and righting wrongs. Seriously, it’s like a friggin’ Christian Star Trek. (Well, it is if you play the game like Mike does, anyway.)

Another interesting parallel between Mass Effect and Star Trek is the existence of a multitude of different humanoid races, each with their own complex history and characteristics. Mike spent a lot of time talking about each of the races, and the individuals who hail from them, so I feel it is only appropriate to include my impressions of them here as well.

In Mass Effect, as in many other science fiction stories, humans are easily both the cleverest and the most unpredictable race. There really is no telling what a given individual will do. On the one hand, you have creepers like Martin Sheen Guy, who likes to go around flipping his jacket on over his shoulders and destroying planets for kicks. On the other, you have heroes like Shepard-Jesus, who divides his time between saving the galaxy and wandering the Citadel endorsing stores, while his fan girls follow him around sporting “Shepard-Jesus Approved” merchandise. Also, there are characters like Miranda, who is, um, hot and smart and…OK, so Mike didn’t elaborate much on her. Something about her being a female clone of her dad? All I really know is that he passed on the opportunity to knock boots with her because, hot bod notwithstanding, he preferred to wait around for Liara the Blue Chick. See what I mean? Unpredictable.

Mike likes the Krogans, so I know a lot about them. He told me that they came from a REALLY harsh planet, and that they are built for survival by having lots of redundant organs and laying thousands of eggs at a time. When they were moved off their planet to one that was a little less deadly, their population got out of control very quickly. In response, one or more of the other races panicked and created a disease called the Genophage, which killed all but 1−2 Krogan children out of every batch of eggs. Good for population control; really bad for morale. By the end of Mass Effect 3 (in Mike’s story version, which he’s been spoiling for himself by reading Wikis), the Genophage has been cured. For some reason, Mike thinks that this will make everything OK, even though it means the return of the same population problem that kicked everything off in the first place. So… I’m guessing that ultimately, the Krogan race probably ends up taking over, consuming all the resources, and generally destroying everything. Shepard-Jesus nevertheless feels proud of his moral choices because he is a twit.

Among the Krogan, the character Wrex is a particular fan favorite. He’s a trusted crewmember of Shepard-Jesus, who is known for his exceptional toughness as well as his tendency to be rather laconic in conversation. As a result of his terseness, he and Shepard-Jesus frequently run out of things to say to each other during long space flights. Instead, they have developed a fun game where they stand around and have conversations that consist solely of saying each other’s names. Originally, it was a competition to see who would have to drop out first, but since Wrex never loses, it eventually became a game to see just how long Shepard-Jesus could keep it up. His current record is 6 hours, 37 minutes, and 42 seconds. 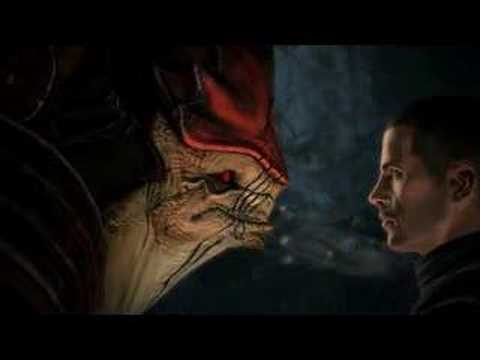 Salarians are fairly short-lived aliens, and they therefore talk very fast, which makes them especially good at singing Gilbert and Sullivan “patter” songs. The character Mordin is therefore the very model of a Scientist Salarian, and doesn’t hesitate to tell you so. Another fun fact is that Salarians aren’t really interested in sex; they mate through marriage contracts that involve males fertilizing batches of eggs. They do not get the concept of bachelor parties. Then again, neither do I, so I guess that’s not really that odd.

Unlike the Salarians, the blue Asari live for a very long time, and they can mate with anything. Seriously, anything. Children of Asari are always Asari themselves, regardless of who the non-Asari parent was. They then take up the genetic task of ho-ing their way through the galaxy, making more Asari, and so on.

I can’t tell the difference between Turians and Quarians (but don’t tell Mike I said so). At least one of them has to wear special suits to protect them from germs because they have pretty much nonexistent immune systems. They also eat weird foods, which are pretty poisonous to other races. Tali is a Quarian/Turian that you have the option to seduce at one point, but it’s my understanding that doing so is kind of…complicated. Mike never attempted it, despite the fact that Tali is apparently “very hot” underneath that suit.

The Geth are a machine race that didn’t respond terribly well when the race that created them panicked and tried to hit the “Kill” switch. They have been at the heart of several conflicts since; however, I like to think of them as freedom fighters struggling for their independence with massive robotic machinery and a hive mind. I’m sure they’re really nice once you get to know them.

Mass Effect: The Music and Graphics

Bwa haha ha haha ha! It’s cute that you think I would know anything about those. Mike’s descriptions are good, but they’re not that good.

Anyhoo, that’s more or less my take on the Mass Effect series. Feel free to tell me how wrong I am in the comments section. I’m especially interested in hearing from those of you who took a substantially different approach to playing the game than Mike did. In a multiverse of infinite possibilities, is there a version with a Shepard-Antichrist? A verbose Wrex? An ugly Miranda? Inquiring minds would like to know…

First off, I want to apologize for such a short review. Not only am I currently addicted to WoW, but this is a review of a "updated" game, not an entirely new game, and I have already reviewed Street