Developers—don’t put superlatives in your game titles. It’s up to me, the player, whether or not your game constitutes a “great” adventure. If what you’re offering is a fairly rudimentary set of puzzles along the lines of that stupid dungeon everyone hates in Zelda: Oracle of Ages, where you have to step on every single tile in a room once without doubling back, then what you are offering is a wholly unimpressive adventure. A pedestrian adventure. Barely an adventure at all. 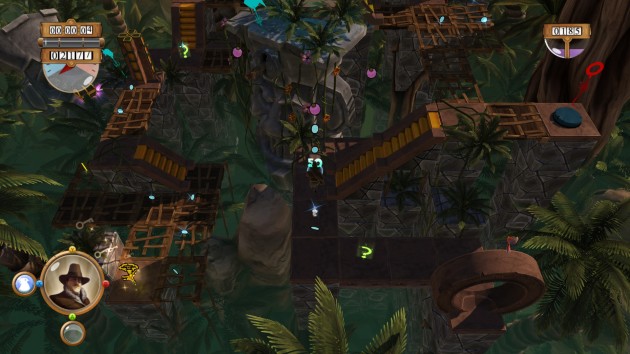 Sometimes when I’m alone in a room with a large, tiled floor (which happens very frequently, as I work in a hospital), I will play this game with myself. “I wonder if I can step on all of these tiles just once each.” I usually win, because the tiles are in a uniform pattern and can be navigated with a simple zigzag. Now, you may be thinking, how can this pursuit—bearing in mind it’s already been established as a maniacally stupid waste of time—be translated to a videogame? A Great Adventure, no less?

Well, developer Fatshark found a way: relentless padding! Yes, Hamilton’s Boring Fucking Adventure is full to the brim with asinine longeurs, the least of which is Hamilton’s aggressively slow walking speed and bizarre input delay. In a tile-based game like this, you want the player character to move a tile at a time. Like in Chip’s Challenge, which this game should have COPIED EXACTLY in its approach to control. Instead, you struggle against Hamilton’s “whoa, slow down, this ain’t a race” saunter as he blunders hopelessly across the wrong bridge, leaving you stranded forever because you had no way of knowing when he was going to stop. You know those eighty-million Frogger games that you keep seeing and going “WHO IS BUYING THESE TO JUSTIFY THEIR CONTINUED PRODUCTION”? They control better than this. In every other aspect those games are effectively the electronic equivalent of a plain rice cake, but they at least control correctly. Hamilton’s Infuriating Adventure does not. In a game based entirely around thoughtful, precise movement, this is unforgiveable. 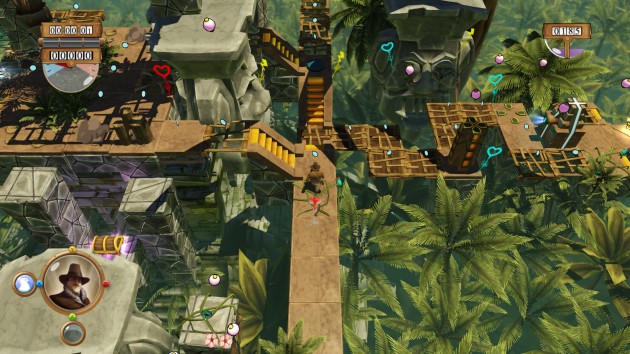 I’ve been trying not to mention The Bird. Oh god, how I have been trying. But now I feel I must. The Bird is the stupidest game mechanic I’ve ever seen, and an even more rudimentary attempt at cramming in a superfluous two-player mode than Super Mario Galaxy’s sad excuse. Basically, one player can control The Bird and fly it around the levels collecting coins and activating switches. This is nothing more than a distraction for those who enjoy the sound of coins being collected. Ding! See a penny, pick it up, I really couldn’t give a fuck. A single player can control The Bird with the right analogue stick, but I would suggest playing Warioware Twisted’s sheep-counting minigame to get the same effect in a more immediate way.

Oh, for goodness’ sake, Hamilton’s Entirely Forgettable Adventure, someone out there is bound to love you. Your graphics are fine, your music is fine, your impossibly long cutscenes were a waste of development time and resources, but they are skippable. Someone out there is going to love you and your brand of infuriating cerebral puzzle inexplicably mixed with insane timing challenges, but it’s not me. You’re not for me, and I’m sorry, because I think the lead designer of this game genuinely thought it was the best game ever. It makes me sad that the controls completely scupper any chance of this game ever feeling right, because it really could have been a tight little modern equivalent of the aforementioned and mighty Chip’s Challenge. Instead it’s a sub-par modern Frogger.

Or: Choose Your Own Adventure, Twilight edition.