Apparently the “Extended Cut” DLC pack for Mass Effect 3 (aka the “Nerd-Rage Appeasement Offering”) came out recently, featuring the much-anticipated extended ending. Of course, when I played ME3 back when it first came out, I thought the original ending was fine, as expressed in my previous article on the subject. After that, I kind of forgot about it, until someone pointed out to me that the new ending had arrived. As I had some free time on my hands the other night, I figured I’d check it out.

So, I sat down and brought up ME3 on my PC, which prompted Origin to come up first. “Ah, Origin,” I said to myself, letting my loathing drip off of every accursed syllable. Some of you may remember that shortly before I wrote my article on ME3, I wrote an article detailing my frustrations with EA’s Origin client; and I had conveniently forgotten that running ME3 meant running…::sigh::…Origin. (Quick aside: Some time ago, EA invited people to leave comments about what they like and don’t like about Origin, even going so far as to host a Q&A with some of their suits. I did not participate, as it’s not my job to fix their product and I only help out if I like something and/or if I’m being paid to do so, neither of which apply in the case of my relationship with EA.)

Resigned to my fate, I went ahead and checked the Origin store for the DLC pack, and nothing came up. “Hmmm, I guess it’s just an automatic download since it’s free,” I said to myself (having already forgotten the lessons I had learned with the first ME3 DLC pack I purchased). So I went and clicked on ME3 and it began updating, which I took to be a sign that the new ending was being downloaded and installed. It completed and I happily brought up ME3 to begin playing. 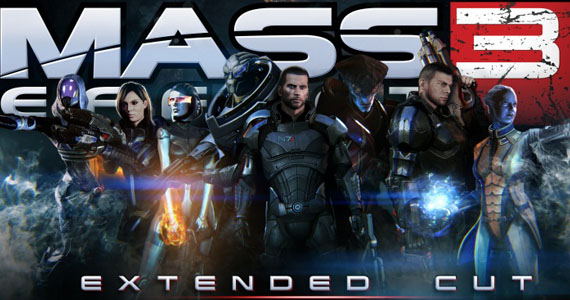 It’s important to note that—at least according to the news sources I’ve read—you can’t just start the game at the end to see the new ending. Instead, you have to go back to the “point-of-no-return” save before the final areas of the game. “No problem,” I thought, “I enjoyed the whole end of the game, and this will help me get back into the swing of things.” So I started up my game, and boy was it still fun. My Infiltrator-Shep was sniping Cerberus and Reaper baddies like it ain’t no thang, and I got to relive all the lovely moments that I so enjoyed before. And for the record, I still stand by my assertion that the original ME3 ending was fine. My moment with Liara before the Cerberus base, seeing Earth in ruins, chatting with my old comrades, and realizing the entire future of humanity was at stake was all incredibly moving to me, maybe even moreso this time, now that Vangie and I have started some…::ahem::…family planning.

Anyway, I got to the end, and was a little surprised that I hadn’t seen anything new yet. “That’s OK,” I said to myself, “They’re probably just saving it all until the end.” So I got to the end, made my final decision…and the same ending played. “OK…maybe there will be something at the very end?” I asked, my unease growing. Everything finished, and then…I was back at my old save. “What the hell?!” I screamed furiously. Now, I wasn’t terribly psyched for the new ending, but after investing almost four hours into this and paying extremely close attention to everything, I wanted a payout. So I hit the interwebs trying to figure out what went wrong. Maybe a bug, maybe a bad install, I don’t know. Then, good old memory kicked in, and I thought to check the “Downloadable Content” tab on the ME3 title screen. I brought the game back up and did so, and lo and behold, Origin popped up a window with all the possible DLCs, including the Extended Cut, which apparently had NOT been installed.

At this point, it was nearly midnight and I had work in the morning. I went ahead and downloaded the DLC so I could at least say I made SOME progress in seeing the new ending, and then headed to bed, grumbling all the way (by the way, the downloader crashed in the middle, so thanks for adding insult to injury, Origin).

Now, a part of me knows I should have remembered that one has to get ME3 DLC through the game, NOT Origin, but at this point, I really just want to wallow in this most recent validation of my hatred of EA and Origin. Seriously, would it be THAT difficult to list products associated with a game in your crappy store? Or maybe update the news on the ME3 title screen to say that the new DLC is out and I should grab it? (As opposed to those damn multiplayer statistics, WHICH I NEVER ONCE USED, AND WOULD MUCH RATHER SEE ACTUAL NEWS.) Nope, instead I was told there was an update, given a screen that said the game was updating (I guess it was bug fixes), then left to figure it out on my own.

EA, I know I said it before, but as evidenced by my actions that night, you REALLY need to idiot-proof your system. Make it easy to search and integrate the online store, the application, and the stores in your games. Have an up-to-date news function that talks about things the day they happen (I didn’t see ANYTHING regarding the update, and it seemed like it would be pretty big news). In short, MAKE IT EASY FOR PEOPLE TO USE IT AND SPEND LOTS OF MONEY.

Anyway, that was my latest experience with Origin and the Mass Effect 3 ending. I guess I’ll give it another shot sometime soon, but dammit EA, I SHOULDN’T HAVE TO.