When I first played Out of This World on SNES, I really loved it—still do, in fact. The game begins with you materializing in a pool of water. Some kind of seaweed or tentacles are rising from the bottom of this pool, and if you don’t immediately start pressing Up, they’re going to eat you. You get out of the pool and you discover you’re on an alien planet. A screen later, you find out that there are small worm/leech creatures; get too close, and you find out they’re deadly poisonous.

The game never breaks the action to say “press Up to exit pool” or “avoid leeches’ poisonous stings”—it never says anything. There’s no narration, no HUD. For this same reason, I really enjoyed the first five minutes of The 4th Wall. You’re given no context, no narrative, no backstory. You’re in a room with a white wall, a wall of TV static, and a dangly bleeding dong-like tentacle hanging from the ceiling. You figure out the rest. 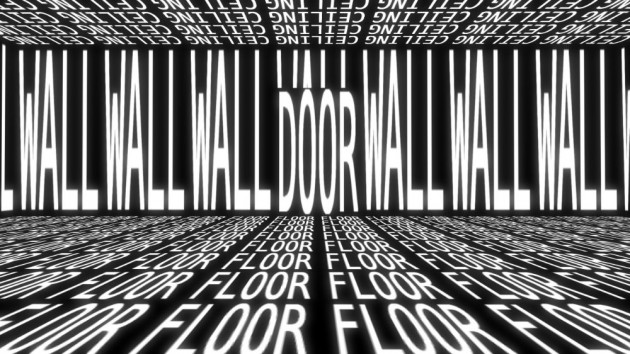 My biggest problem with this part is that the controls start with your Y axis inverted by default. There is no way that I found to change this. I hate inverted Y, and for a game that requires a lot of exploration and looking around, player comfort is important; a way to turn off Y axis inversion would have made the game a lot more enjoyable for me. As for storyline, 4th Wall tries to be unsettling, but only succeeds at merely being weird—which is not the same thing. In one of the first rooms you walk into, the floor is labelled “FLOORFLOORFLOOR” etc., and ceiling, doors and walls are labelled similarly (see above). There are four doors. In three of them are one-word messages: “You” “Will” “Die.” This really isn’t unsettling. At worst, this is telling me that there is an enemy in the game that wants me dead. That describes every videogame but Tetris, and even then I’ve never fully trusted that L-shaped Tetromino. It may as well have said “be scared please.” Despite these problems, though, it was still a good time.

Now, normally I don’t get on a $1 game’s ass for being too short. I completely understand that I should not expect a 40-hour, content-packed epic for the price of a Kit Kat. That’s cool; I get that. However, you may remember earlier that I said I really enjoyed the first five minutes of the game, and you may have assumed from that statement that the game got crappy after the first five minutes. It didn’t. The problem is that the entire game is five minutes long. I could see it being 15 minutes if you seriously get stuck but, really, it’s a 5-10 minute game. It was so short that I can’t even tell if the developer was good at creating puzzles. A four-puzzle sample size just isn’t much to base an opinion on. 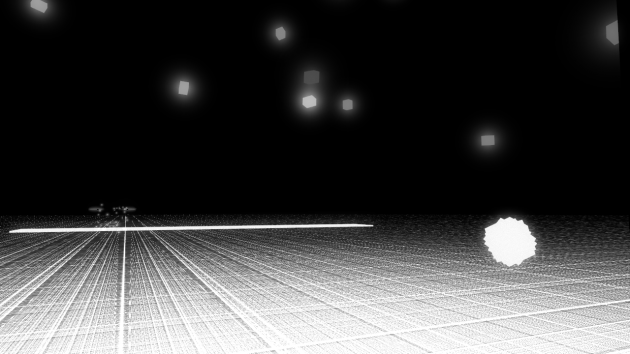 With a game this small I have little choice but to delve into spoiler territory, so reader beware of the evil red spoiler text below.

Before I give away the entire ending of this game (and I’m going to) I need to first give away the PC version’s ending. Basically, The 4th Wall isn’t a game—it’s a gag. In the PC version, the ending is that the game gives you a false error message and you go back to the desktop. You think the game has crashed and all of a sudden the static hand that flew toward the monitor in the game does the same thing from your desktop, and when the game is exited a picture pops up on your screen showing that the dangly tendril has been severed and lies in a pool of blood. That’s a cool little Psycho Mantis-esque gag. It’s completely lost in translation to the Xbox 360, though. In that version, you get a fake error message, are brought to a new level which quickly freezes, the static hand comes out and the game itself is then frozen, showing you a shadowy figure and the severed tendril. I have no connection to the tendril, so I don’t care. I don’t even realize the game is over, so I play through again, figuring it’s only five minutes so maybe they expected me to play through again and I’ll get to play the full game. No. That was it. The gag translates so poorly to the Xbox that I didn’t even perceive it was a gag. Honestly, I thought the error screen was legit and I had accidentally started playing some interactive attract mode. I felt confusion and annoyance, but not fear.

The 4th Wall was a good time for the brief time I was able to play it, and its biggest problem is simply that it sells itself short, using the fun game portion as an extremely short vehicle for an attempt at a twist ending when I would have much, much rather had more gameplay and puzzle solving. If you have an insatiable hard-on for horror games and must play this game, do yourself a favor and play the old, free PC version (here). Do not—I repeat—DO NOT get the Xbox Indie Games version. It simply does not work like it should on this platform. If you do buy it, don’t expect a full game.

The gang discovers Pinball is Videogames