Today, I played My Little Pony: Friendship is Magic. It’s the first “official” game for the popular 2010 TV show. According to my Pinkie Pie clock, that makes it Pony Playtime! 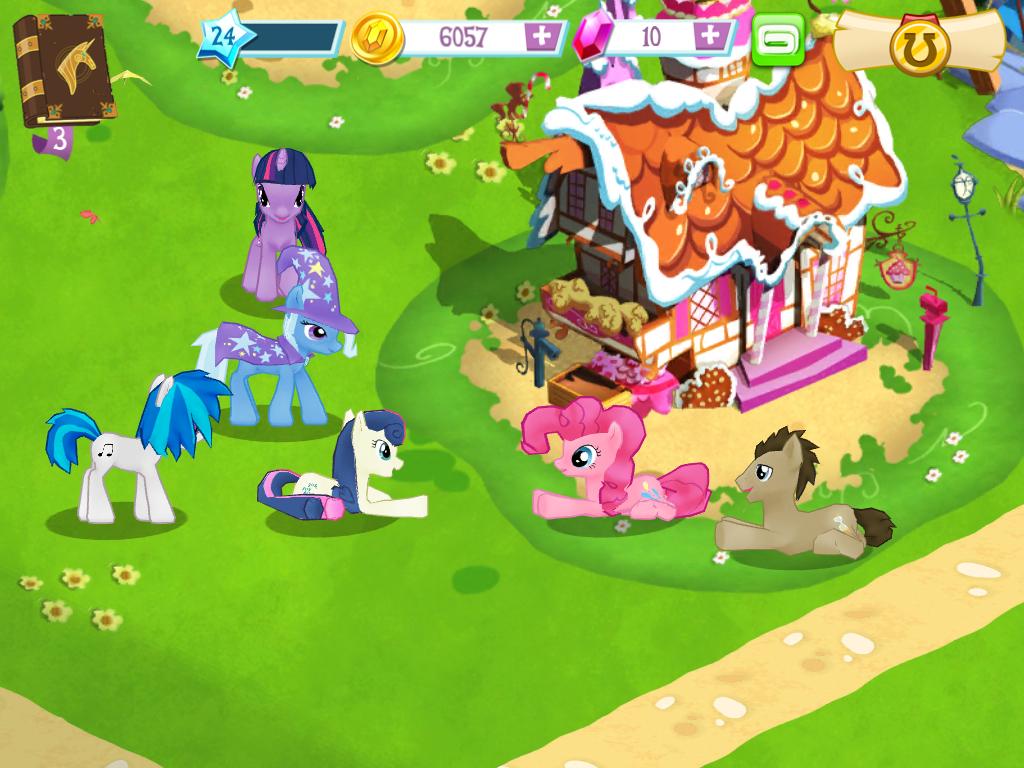 I Used to Wonder What Friendship Could Be

The game is the exact same thing as The Simpsons: Tapped Out (iOS). In other words, it’s a licensed freemium game. Your goal is to build a town and fill it with characters and locations from the TV show. The characters walk around Ponyville and interact in incredibly cute ways.

The overall plot of the game is a rehashing of the premiere episode. Twilight Sparkle needs to find all her friends and activate the six harmony stones to stop Nightmare Moon. The various quests you have to perform usually try to relate themselves to the main plot. Mostly, they’re just random things like “buy three haystacks” or “purchase the Town Hall.” Finish quests to complete the game and get EXP.

The graphics for the game are rather good, with a few hiccups like Octavia’s portrait being too young, or Applejack having two ponytails (in addition to her literal pony tail). There is some minor voice acting, which I thought was a nice touch. There are also unremovable ads in the store section, which I thought was a bad touch.

I don’t see this game having much appeal for people who haven’t watched the show. Pony fans should eat this game up, though! I mean, it’s a game that’s full of your favorite characters, and then some! You’d love it even if it wasn’t free. 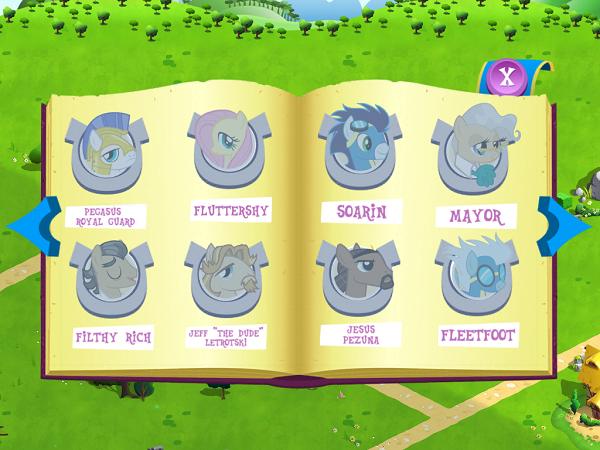 They even included the The Big Lebowski ponies. Ponies with beards for the win!

You can level up your ponies by playing one of two minigames. There are five levels in all; the higher level your pony is, the more money they can get while working in a store.

The first minigame is Ball Bounce, in which you throw a ball at a pony. She (or he) will bounce the ball back at you, hitting it with her or his head. It’s a fun game and a nice usage of the touchscreen. If this were the only minigame, I’d be satisfied with it.

The second mingame is Apple Catching, in which your character has to run right and left to catch falling apples. Don’t accidentally catch the bad apples, or else you get a second-long delay. The controls for this could be a little bit tighter; if you hold left and right at the same time, it can cause your character to run in weird directions.

When you’ve played enough minigames for your pony to upgrade a level, you get a flying minigame. This is probably the most fun minigame of all. Tap the screen to have your pony fly upwards. Collect coins and avoid hazards, and if you get five white clouds, you do a Sonic Rainboom. They could have gotten away with making this the entire game, and everypony would love it.

There is a fourth minigame, called the Balloon Pop. It is run by the two con artists, Flim and Flam. Simply tap on the screen to pop balloons and get the fabulous prizes within. They have a few exclusive characters you can’t get anywhere else, but be warned: the game comes at a high price, with a low chance of success. I could only afford the 25-gem version once, and I got no balloon pop ponies. Total waste of 25 gems, although truth be told, I didn’t want Snails that much anyway. 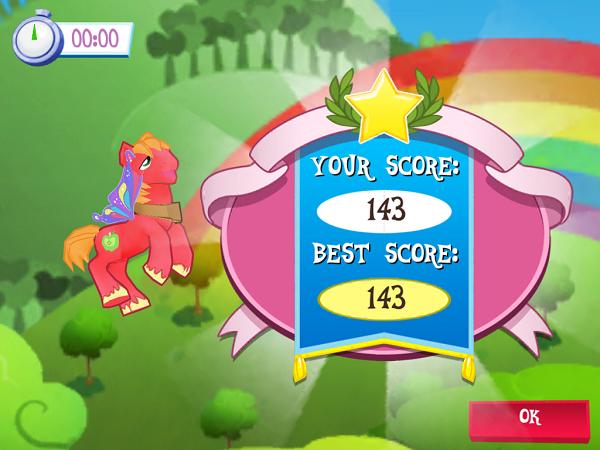 One of my complaints about the game is the social aspect. You can connect to Facebook and give presents to your friends! That’s a fun little add-on, right?

Turns out that it’s mandatory.

You have to gift your Facebook friends who play this game, or else you can’t complete certain quests. Certain characters like Zecora and Mayor Mare are unlockable only through social interaction means. As someone who always ignores Facebook game requests, I find this to be an annoying feature that I wish were optional.

Sorry, Scootaloo. It looks like I will never be able to play with you. I’d like to, but I’m not popular enough! 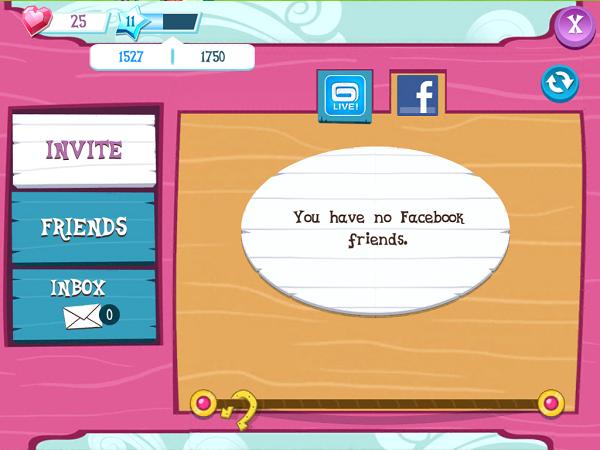 Thanks for rubbing it in.

Better Pony Up Some Cash

In addition to gold coins (“bits”), this game has a secondary currency: gems. You can buy them, at a rate of one dollar per ten gems. They are used to skip quests and waiting times.

For example, say you pay 17,500 bits to unlock the Great and Powerful Trixie. The game gives you the option of waiting eleven hours for her to arrive, or paying ten or so gems to have her arrive instantly. As someone whose longest-running job position for the past six months has been “unemployed,” I can’t afford the option of paying a dollar to make somepony hurry up.

If buying gems was only an option, I would have no problem with it. But I guess Gameloft decided that they wouldn’t make enough money off of gems that way. So they made gems mandatory for many different quests, characters, buildings, etc.

For example, the mandatory character Rainbow Dash costs 500 gems, or $50. When you add up all the mandatory gem purchases, it comes to about $260. I’m not exaggerating here. $260 of mandatory content in a free game? That’s so much gem hoarding that even the Diamond Dogs are going home in disgust. Meanwhile, King Sombra is laughing over his new army of Crystal Slaves. I feel bad for the show’s target audience of little girls, because they’ll never afford to beat the entire game. 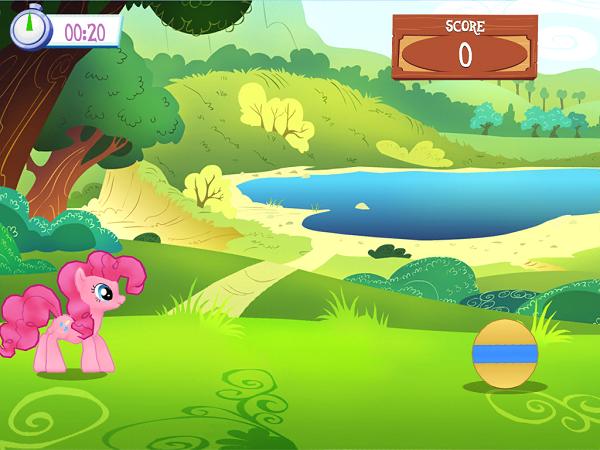 In the game’s defense, it’s possible to get gems for the mandatory purchases, without paying real money. Once you hit the level cap of 60, though, it’s not very feasible. Here’s how you can get gems for free:

1. Find Derpy, who is randomly hidden somewhere each time you start the game. You have a 6% chance of getting a gem from her.
2. Play for 5 days in a row, in order to get 3 free gems.

So Option 2 is out. That leaves us with Option 1: Farm gems from Derpy. Farm her like crazy. Farm her for gems, just like how Gameloft farms its customers for money! 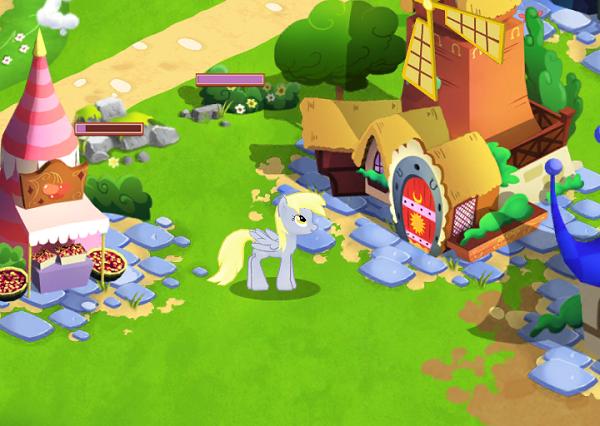 In conclusion, Princess Celestia, My Little Pony is an interesting-enough game for fans of the show. Eventually, you’ll reach the upper limit, where you have to pay real money to progress. Then you might as well give up, because it’ll take decades to finish the game.

I recommend trying the game out, if you’re interested. If you don’t like it, I’m sure your sister Luna will.

P.S.: I apologize for taking two weeks to write a review for this game. You’re not mad, right? 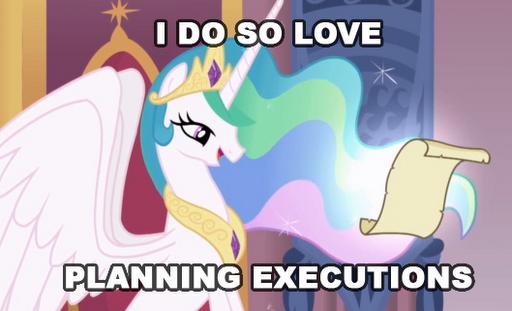 Well, it's that time of the month again. Yes, that's right: It's the time when all the broke readers of GameCola look to The Poor Player's Paradise for their temporary amusement until they have enough