Ominous Voice here. Looks like my last column really got people talking, mostly about how I ripped off Mark Freedman. Well, I got somethin’ to say about that: Mark Freedman actually ripped ME off. That’s right. The smarmy bastard wrapped his nasty man-talons all over my time machine, traveled to January 2006, submitted something that used similar content, and received high praise for his work. What a load of bull. He should be dragged by his heels into the streets of some high-falutin’ census metropolitan area and forced to sing Raffi songs naked in the town square. Not that I’m into that kinda thing, mind you, but that little chrono-twistin’ pisspot really grinds my gears. Not that I’m into THAT kinda thing, either.

But this isn’t about Freedman’s House of Ill-Gotten Gains. This is about all that’s wrong with videogames. And believe me, they can be more broken than a calm family dinner with the Lohans. So you wanna know what’s really screwed up about videogames? I’ll tell you: characters don’t bleed the lizard. That’s right: most videogame personalities must have bladders made of solid stainless steel the size of Calcutta, ’cause they’re not bleedin’ one drop of urine during their entire quests sometimes. And that’s just wrong—not only is it unrealistic (not that anything in those games could be considered realistic to begin with), but it really makes you wonder how much pain these people must be going through, beyond all their usual scrapes and scratches from dragon claws.

Take RPG travelers, for example. Yeah, we see them take a quick cat nap at the inn: they just crawl into bed after they’ve been thrashed half to death by a pack of wild fire-breathing avians and then walk out of it when it’s time to get the hell on outta there! But they don’t seem to stop for a pee break. I would think shoveling down more than a few potions on the battlefield would give ’em the idea that “Hey, maybe we oughta find a toilet. ‘Kay?” Worse yet, most inns (and just houses, for that matter) don’t even have bathrooms at all. Where do the residents drop their crescents, in the kitchen sink? Or maybe that’s what’s keepin’ the flowers alert in the front. Hell, some of them HAVE bathrooms and nobody gets to use ’em! Remember that first town in Breath of Fire II? Some mystic hooligan was LIVING in the damn thing, so that was off-limits! And Majora’s Mask? Link couldn’t start the defecation parade because there was a frail Gollum creature livin’ in the damn inn lavatory! Link’s a true hero: he just gave the dude a scrap of makeshift toilet paper and went on his way. I haven’t really seen a Mario or Sonic game with a bathroom yet, but I’m sure they just let nature take its course during those underwater levels. 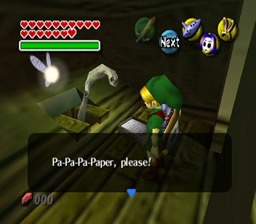 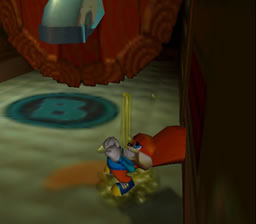 (Toilet humor never gets old. …OK, maybe it does.)

Sad thing is, and this happens more nowadays, there ARE toilets in many 3D shooters. Occasionally, non-playable characters occupy those porcelain bowls, but in the end, you’re not going to use them. They’re there either to be destroyed or to mock your sorry existence. It’s kinda gross, but props go out to Duke Nukem for taking the time to visit movie theatre bathrooms and relieve himself. And when he says, “Ahhh…much better,” he means it. Seriously, Apogee probably wouldn’t let him use the bathroom at all during the first two games, until Duke Nukem 3D finally came around and gave him the release he needed. And I suppose I’d better give thanks to The Sims for allowing your evolutionary blob of a human to pretty much camp out in the can if they really want to. Last time I played The Sims, the main character spent, like, half an hour taking a whiz. I watched the time go by, and I’m thinkin’, “How many Big Gulps did this chick down before I started?” Turned that crap off soon after; it was an awful game. Most critics thought it was dandy; they’re all wrong and should be given a swirlie.

And I hate to bring it up, but there ARE certain games that use these little factoids to their advantage. Remember Conker’s Bad Fur Day? The one where the drunken squirrel pisses all over his enemies in a mad stream of one part hatred and two parts justice? Yeah, he was livin’ the dream right there. And if you’ve played Postal 2 (and thankfully, I ain’t among those sick twisted cornholders), you know you can use your urine for awful deeds. Y’know, things like whizzin’ out napalm or getting a sexually-transmitted disease and havin’ the stuff change colour… and viscosity… OK, maybe there’s a limit here.

Er…anyway, it’s bad enough some games have more cutscenes than the Sundance Film Festival, causing me to hold my OWN bladder while my prostate moans like the climax of a Noh play. But having my trusty characters do so for what seems like months at a time? That’s just damn cruel. Crude though it may be, we gotta celebrate our natural functions in videogames more, though not to the extreme like that nasty Postal 2. I wanna forget that game exists. …S’not workin’. Er…anyway, we’re getting closer to that aforementioned digital hootenanny on micturition: Wario now gulps down garlic and lets his puffs of toxic fumes do the talking in Super Smash Bros. Brawl. And let’s not forget about Boogerman, whose pick-and-flick attacks and ceremonious belches were adequate in destroying what gruesome sludge was coming his way. If these are fair game, why not allow the use of a bathroom for its basic purpose? It’d be pretty awful to see your party explode midway through a final battle. Hey, maybe that’s what REALLY happened to all those Prinnies…