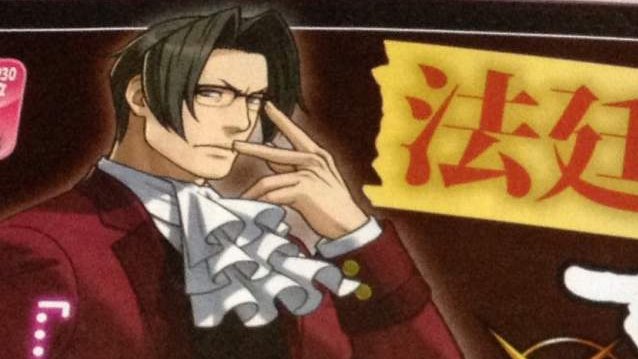 So, at this point, I’m not sure if anyone really wants to read these, but hey, I’m a fangirl. Not that that’s really an excuse for anything.

First of all, check this out.

Yeah, yeah, yeah, I know what you’re gonna say, it’s all in Japanese. But I’d just like to point out a couple things…

We get out first look—er, listen at the new music. I like it so far. It seems more orchestra-based, which is pretty cool. And some of the old music is still recognizable, like the old suspense theme and “Objection! 2004”. However, this does bring up the question: what will Apollo’s objection theme be? The same? I’d feel a bit cheated. It’ll most likely be a remix of “Objection! 2007”.

Also, the courtroom atmosphere is really dark in comparison to previous games, further reinforcing the theme of “dark times for the law”.

According to the comments, there’s a new button on the touch screen that allows you to reread previous dialogues. Helpful for players like me with short-term memory loss. We also see that the health bar system is back, which (at least in my mind) was connected with the Magatama at its inception. Does this mean the Magatama will make a triumphant return as well? We’ll see.

Overall, in my opinion, graphics and animation look pretty smooth. This gameplay footage reveals a lot, all things considered. We even get our first official glimpse of the defendant right at the very end.

Court Records has a scheduled release date as sometime between September 22 and December 21. Very descriptive. Hopefully we’ll get more information on that soon…

In other news, more new and returning characters have been announced, the most prominent being MILES EDGE—I mean, the new detective.

Gouzou Ban is a detective bent on justice, which, ironically enough, is his catchphrase. From a poor Google translate of the official bio on the site, I can infer that he may have a grudge against prosecutors because he believes they create “distortion”. Anyways, on to the important stuff. Although an unnamed person (*cough* PAUL *cough*) spoiled this before I was done freaking out, both Miles Edgeworth and Trucy Wright are going to appear in the game. Trucy will presumably have the same/a similar role as Apollo’s assistant, while Edgeworth…who knows? 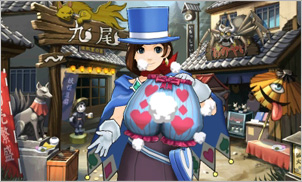 Looks like Trucy has not lost her affinity for her magic panties. 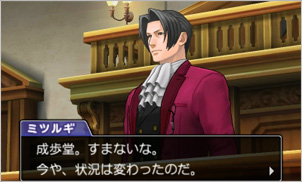 Finally, four new characters have been announced for case 2 of the game (which shall henceforth be know as the “Apollo case”). More can be read about that here. So check it out, if you’re curious.

Until next time, faithful readers. I leave you with this…

I'm sure most of you out there are familiar with, or have at least heard of, Lewis Black. For those of you who aren't he's a very talented comedian known for his angry and insightful rants, sort of l