Finally, the mystery Yellow Coat girl gets a name.

For those too lazy to watch the video (watch the video, seriously), her name is Athena Cykes, she’s a specialist in analytical psychology and she’s a…defense attorney? Then wait, why is she helping Phoenix? Doesn’t she have her own cases… Whatever. She’s apparently the “Bringer of Revolution”, so I look forward to hearing her backstory, I suppose.

Secondly, Phoenix’s new voice actor is going to take a bit of getting used to. Does anyone else think he sounds a little bit like He-Who-Must-Not-Be-Named (a spiky-haired defense attorney, not Lord Voldemort…oops)?

The graphics look really nice, but like I just said, I think they’ll take some getting used to for hardcore fans of the series. In fact, I think the entire game will be, as here’s another shocker: Ace Attorney – Dual Destinies will only be available as a digital release on the Nintendo eShop.

According to Diana’s research, the game is slated for a Western release this fall on the eShop only, which is kind of a let down to a fangirl like me. But according to my good friend (or maybe not-so-good, now) Christian Svensson, Capcom USA’s Senior VP, it’s always been difficult to attract an audience for Ace Attorney, and releasing it only on the eShop will allow as many people to enjoy it as possible for the longest amount of time possible. Details on price will be confirmed in the not-so-distant future, “which I hope will also shed more light on the strategy at play here”. 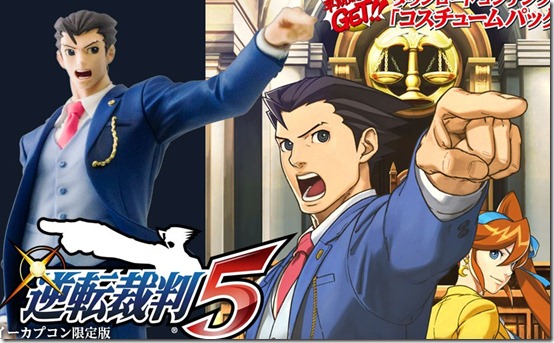 I mean, come on! I want a figurine too!

…They already cheated me out of the Miles Edgeworth one.

Hello everyone, and welcome to Inside the Guide, the only article on GameCola that discusses writing guides for videogames. You know, I post my guides on GameFAQS under the pseudonym "The Lost Gamer."