Of course. Of course the debut of Phoenix Wright: Ace Attorney – Dual Destinies would be at E3. Okay, now Capcom is just spiting me. I mean, I live an hour from LA and decided against applying for a pass to E3 because I haven’t written any “reviews” yet. But despite my dismay, here it is, your Ace Attorney E3 preview.

Right off the bat, we have some English names. Creepy-Should-Be-On-Death-Row-But-Isn’t-Prosecutor’s name is confirmed as Simon Blackquill (probably because of the hawk/falcon thing), the defendant in case one is Juniper Wood, and Barashima Shingo, that suspicious guy on the bomb squad that we’ve been seeing in all the previews, will be known as Ted Tonate. Get it? GET IT??? Oh, dear…

The “fact sheet” is pretty generic, detailing the investigation and trial modes of the game and introducing the basics of the “Mood Matrix”. You can read the whole thing here, if you so desire.

Finally, Capcom says they have a “surprise” for us. I suppose it’s too much to ask that this surprise be Ace Attorney-related, but hey. A girl can dream, huh?

Alright, fine. If I’m in the state next year, I’m going to E3, I get the message. At least I have this to calm me down.

I’ll keep you all posted throughout the weekend as we get our first real look at Ace Attorney – Dual Destinies.

Sigh. This is what I get for not scrolling down on Court Records.

So, here’s some more info. The voice acting cast has been announced. Phoenix’s voice actor will be the one from Marvel vs. Capcom, so get ready to get used to that. Other than that, nothing too interesting…whoa. What is that?! 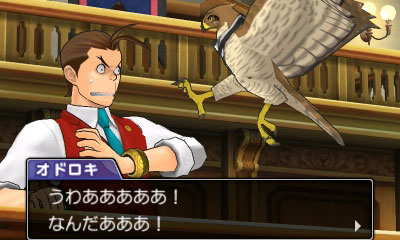 HAHAHAHA! … Sorry. It’s not nice to laugh at the pain of others.

Anyway, the article contains a fair bit of information about case two, which I will not reveal in case people want to be surprised, but also explains something from the last trailer which I didn’t quite understand. 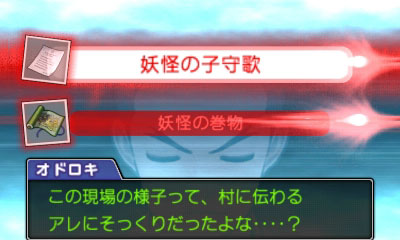 There is a new mode of gameplay called “Thought Route”. When Phoenix (I use Phoenix instead of Apollo because I like Phoenix better) and the gang think they know who the true criminal is, but just can’t put it together in a way that makes sense (which seems to happen often), they get the opportunity to put together a “train of thought leading to a new deduction”.

… So, it’s Logic, from Ace Attorney Investigations. Pretty much.

Regardless, everything looks intriguing, especially the teaser for the third case, which seems to take place in a school plastered with posters about law, prosecutors, and a…rock band?

Today is the first day of E3! Our press pass was denied for some inexplicable reason, so I wasn't able to attend this year. I'm not sure how to report about E3 this year, so I decided to ask Paul Fran