“Percy, the devil farts in my face once more…”—Edmund Blackadder II

And this year, that fucker’s been eating ghost peppers. 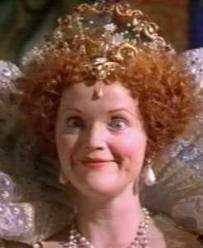 Hi there, some of you might remember me as Meteo Xavier; I used to do reviews that no one commented on for games I couldn’t pay you to give a shit about. I used to start the article with a dour, melodramatic and self-centered introduction much like this one for lack of a better angle to start out with and eventually I’d get to the fucking game already. For this reason and formula, I’ve only been gone a few months, but you’d think it’s been years since I last wrote here.

Seems about right, I thought the two summers before me were pretty bad—to the point where the supernal aggressor had to break the laws of NATURE just to keep its quota—but this year we had to make up that quota in TWO WEEKS. The first week we lost Noriko, my computer blew up, a tree fell on the house, the lawnmower blew up, my copy of Seiken Densetsu 3 blew up, I got pulled over for going 2 MPH over the speed limit and didn’t have the right tags or insurance card…that was ONE week. The second week I’m currently trying to suppress with brain damage by listening to Lewis Black standup over and over again.

I’ve spent every reasonable moment I’ve had free (and many I didn’t) fixing a bunch of that, and two weeks ago there was finally a break in the form of a road trip to Knoxville. On the road was a game store I hadn’t seen before. They only had one game that piqued my interest, and it was a Sega CD game I’d never heard of before—SOL-FEACE. It was in an unusual thin CD package that most Sega CD games do not come in—with the exact same image for both the front and back with no idea as to what it was. Thankfully, the impossibly tall Jeff Day pod behind the counter produced a gameplay video for me. 20 seconds later, the purchase was made. 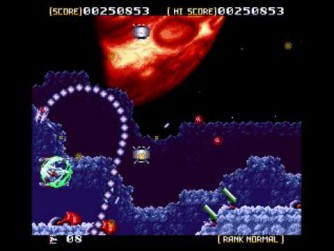 You can’t see it with the size of this small-ass picture, but hidden in the background is a still of Tina Fey’s sex tape before she realized she could make more money being a self-proclaimed feminist icon than trying to persuade the South American public into thinking anyone wanted to see her naked.

As you can see, the game is a SHMUP. Not a shmuck, not a shmuppet, a SHoot-eM-UP—and the exact kind of game I go to look for in a game store. Never heard of it, but $7 for a fast-paced, creative shooter with old anime cutscenes is right up my ass. You were expecting “alley”, weren’t you?

If it wasn’t for the punishing gameplay, I’d consider this my reward for a summer well suffered. I don’t know, can I be punished and rewarded at the same time without being spanked by a leather-draped Quasimodo? Well, at $7 total instead of $70 an hour, I definitely got the better deal of the two possible options. There are 7 stages in the game and the game can roughly be beaten in about 27-35 minutes. Kinda standard for the genre, but unlike Potato Man Seeks The Troof, it doesn’t feel like a cop out here—it feels very natural and fits almost perfectly.

One way that works is that almost every second shoots a different challenge at you and the sheer number of ways they do that is pretty impressive, even for a shooter from this era (although I don’t know every SHMUP from the 90s, it feels pretty impressive to me in that context). You get your typical lines of identical ships, space debris, and bullet-hell geometry horror—but they REALLY mix it up throughout the game and don’t re-use a lot of things twice. Some really clever ships and tricks only show up once, but they tend to make an impact. Sometimes the action will be really slow and still somehow force you to maneuver your ship carefully, and sometimes it will shit out lasers and ships and boulders and lava and missiles and tits and bombs and rocks and such quicker than a Taco Bell diarrhea on fast forward. 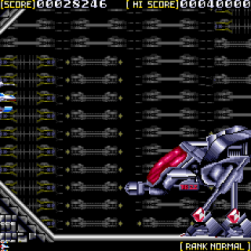 I was trying to find a way to have the words “Soul Feast” somewhere in this review, but I thought that was too stupid even for me. Still, it’s in here somewhere, and I’ll give $5 to the first asshole who finds it.

What really makes this work, though, is the progression. It only starts off like a typical SHMUP, but doesn’t stay there long, and IMO, the progression and actual sequence to how these wild challenges are thrown at you are carefully placed to elicit reactions out of you. By the time the third boss shows up, and the look on your face during its “entrance”, you know this game is doing a RESPECT CHECK on you. The developers clearly hit the drawing board pretty hard and took real consideration to how these would play out.

I kinda wish they made the actual ship more interesting. It has a comparatively limited number of upgrades and different weapons to other SHMUPs. The main gimmick to this one is you get to install two new guns—one on top, and one on the bottom—and change their direction in flight so that they can either create a more concentrated stream of death or spread out. You only get missiles, a not-that-great laser, and stronger blue bullets. It works well enough, but I couldn’t help but wonder why they left it so limited and not do cool dodecahedron lasers and lightning queefs and all that R-Type crap.

Aesthetically, the game is pretty easy to look at. Nothing really amazing except the designs of the larger ships and bosses, but like a high quality and very colorful SNES game. The music of the game is a real compliment too and I was pleasantly surprised to find the maestro was none other than a young Motoi Sakuraba with some of his earliest jams foretelling a massive career to come. 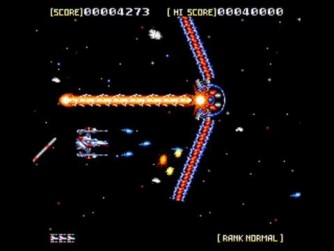 You wouldn’t think it’s hard to make a penis joke here, but as my wife describes my Johnson to her friends and anyone we pass in the street, I’m stumped…oh wait, that could work…

The only thing that sucks about this game is, of course, the punishing difficulty. Even with SAVE STATES, you can barely get through this game. But think of it like the Sega CD equivalent of Gordon Ramsey. Sure, it’s brutal, blows stuff up in your face, and won’t suffer your incompetence any longer than it takes to drive his foot straight up your ass, but as long as you work hard and respect it, it will respect you back and make a ***damn man out of you, no matter what you have dangling between your legs.

And usually at this point is where I reuse the theme to close out of the review, but since I’m already raping the “remember me?” trope, the “woe is me!” personal story, Gordon Ramsey, and the leather clad Quasimodo (oops, there goes my boner again), it’s not worth it. Let’s get the score.

Ten years is such a long period of time. Ten years ago, I was a bright-eyed child who had finally saved enough money to buy a videogame on his own. Not a gift from Mommy or Daddy or Santa. It was some