Left in the Dark: No One on Board is the riveting mystery game about the time Spongebob Squarepants went onto a haunted ship and fought the Hash-Slinging Slasher. Left in the Dark is a casual mystery game. It takes place in Port Providence, Pennsylvania, in the late 1800s. The story is that a cargo ship has mysteriously disappeared. The crew was killed, the cargo was stolen, and the culprit is a mysterious villain with a meat hook for a hand.

Obviously, this is the work of pirates. There, I solved the mystery in five seconds.

The local authorities are completely stumped by the mystery, so they send a letter to a woman named Madam Detective. Despite the fact that transportation was not that good in the 1800s, she receives the letter the same day it was written. One train ride later, she arrives at the port town later that night.

Naturally, our heroine decides to explore the creepy ship alone. She soon runs into the hooked villain, who is in the process of slowly killing the two surviving crew members. Fortunately for our hero, the villain puts no effort into killing her, besides looking at her through a window. She returns the favor by putting no effort into capturing him. Seriously, Madam Detective, you should contact the police or at least tell someone that the killer is still on the loose. 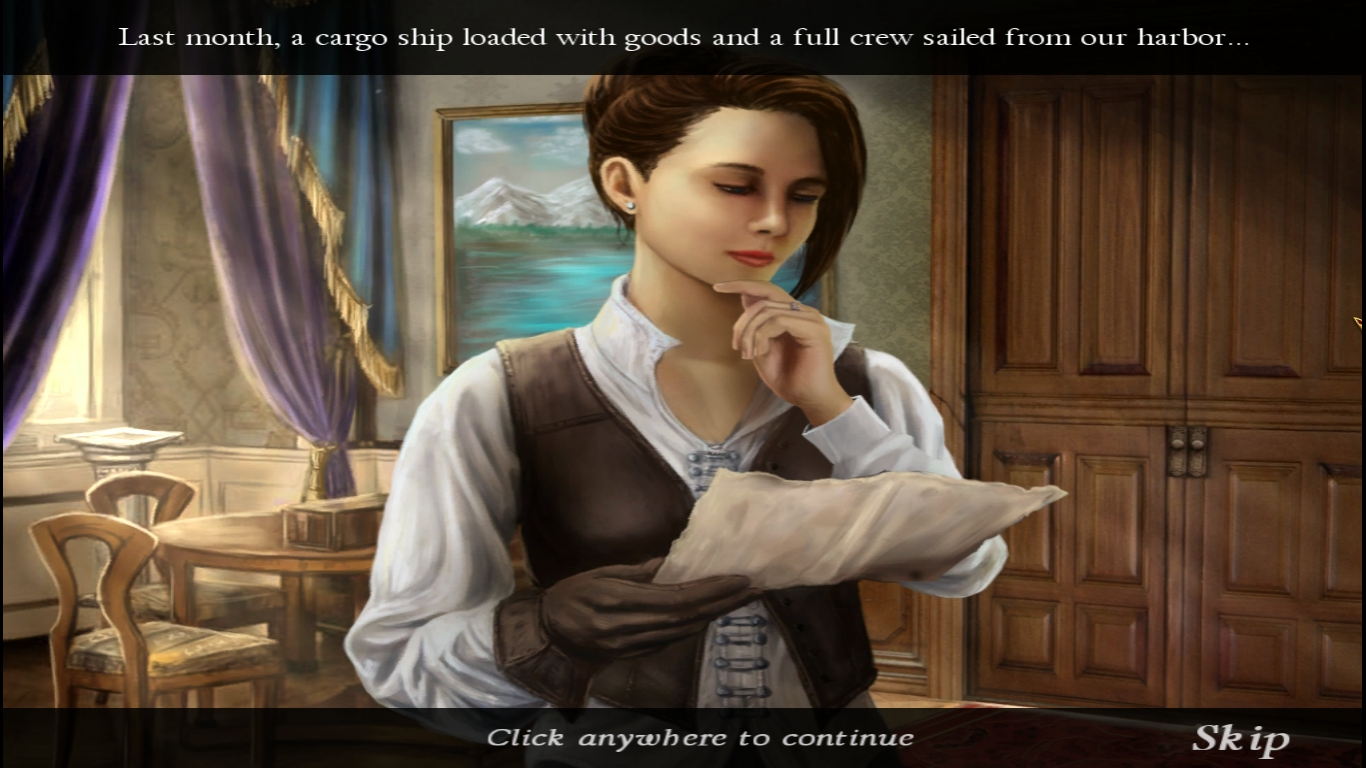 That was a popular hairdo with women in the 1800s, right?

I kind of like the game’s story, even if it’s a bit generic for a horror game. The problem is that the story takes a backseat to the scary elements, which ends up hurting it.

For example, all the male characters in the game speak with deep, gravelly voices. It’s supposed to frighten you, because they sound tough and scary. But since these guys appear in the opening cutscene, before any frightening things occur, your reaction is less “oh no, more scary things!” and more “gee, the people in this town desperately need throat lozenges”.

At one point, you have to solve a puzzle to open a door that leads to a hallway. Then, oh no! The villain is pounding at the door because he wants to get in and kill you! Yes, this is scary, but it doesn’t make sense. The door is unlocked! You just solved the puzzle to unlock the door! Why is it that the villain can’t get inside?

For the first half of the game, our heroine gets occasional visits from a ghost. “Don’t go on the ship!” the ghost warns. “Stay away from the ship! He’s going to kill you!” It’s certainly a jump scare, whenever the ghost appears and says you’re going to die. Halfway through the game, the ghost does a complete reversal and basically says, “Oh, you must be here to avenge my death and stop the monster forever. Great! Let me give you some info about that.” She then goes into the frightening story of her brutal murder and the monster’s creation.

… Actually, it turns out the monster is just a random guy who goes on a one-day killing spree every ten years. This is his fifth killing spree, which means he’s in his 70’s by now, and…huh. The game doesn’t specifically mention it, but the killer has to be a senior citizen at this point. How was he able to single-handedly kill a crew of young sailors, then? 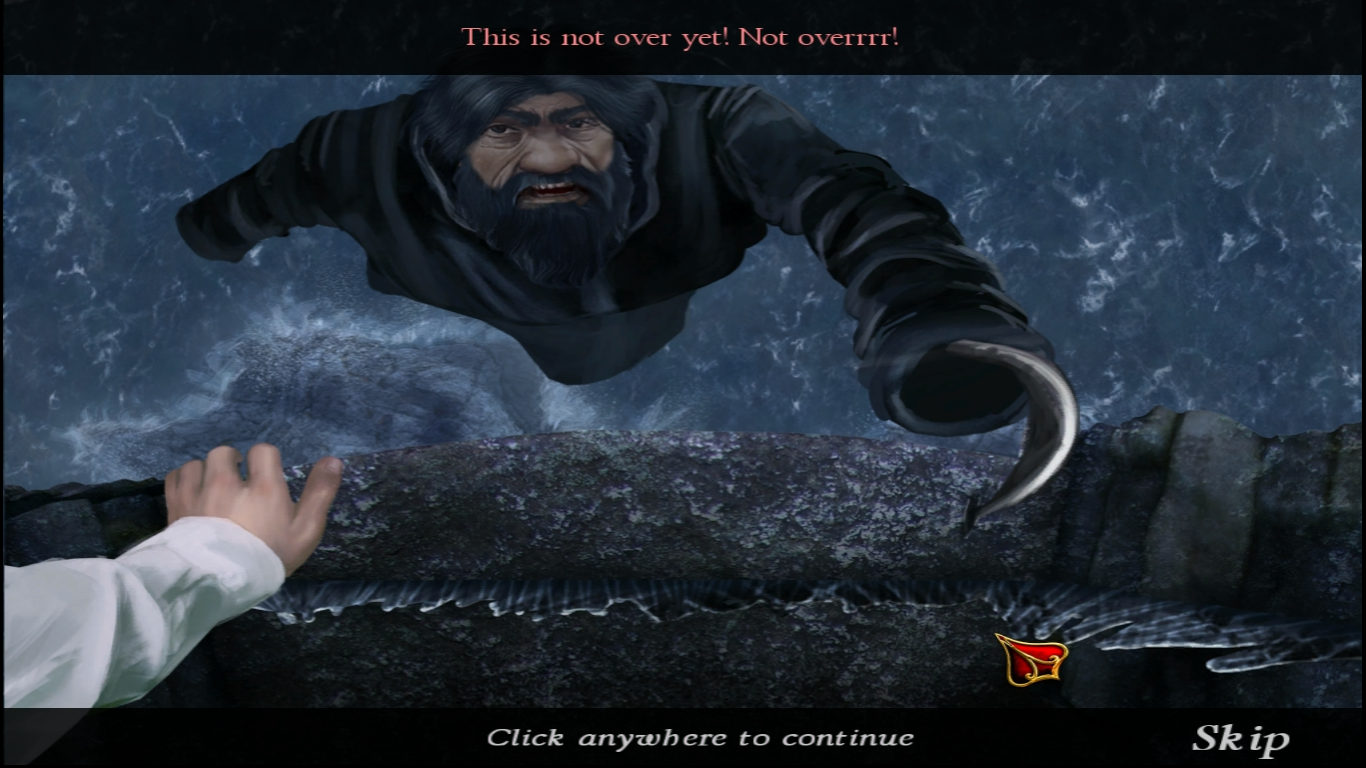 Also, the killer is Hagrid from Harry Potter.

The ghost doesn’t tell our hero who the killer is, because that would be too easy. Instead, she leads you to Devil’s Island, where the killer’s hideout is. On the boat ride there, the senior citizen jumps off of his boat onto our hero’s boat, causing both boats to crash on the shore.

They are unharmed by the crash. Even though he just tried to kill her, the serial killer decides to leave our hero safely on the beach, while he goes away to do…something. She catches up with him in the lighthouse, where she defeats the villain by—get this—shining the light in his eyes. Momentarily blinded by the newfangled electrical light bulb, he stumbles backwards several feet, crashes through a window, and falls to his death. His body isn’t found until the sequel.

The killer’s dialog during the confrontation scene is strange, and not just because he sounds like bad imitation of McGruff the Police Dog. The first thing he says is that he’s surprised to see her here…even though he was literally two feet away when she landed on the island. He also indicates that he overheard our hero talking to the ghost, which is…huh. Yeah. That happened, I guess.

Oh, and it turns out that the killer has a huge pirate treasure in the basement of his house. There are all sorts of treasure chests and golden coins everywhere. I TOLD YOU HE WAS A PIRATE. In fact, “standard” seems to be the word that most reviews are using for this game. None of the puzzles or gameplay stands out as bad, but…nothing really stands out as good, either. It’s an average, generic horror game for the casual market. Everything it brings to the table is good, but it definitely isn’t bringing anything new.

Two things stand out for me, though. First is the game map, which lets you warp to any screen in the game. I just played two games in a row with huge maps that required a lot of backtracking, so this was a godsend. To make things better, every map location where you can perform an action is marked with a special symbol, so you don’t have to wander around, trying to find the one screen where you have to do something.

So, let me calculate the final score. Five points for the average, median score…plus one for features I liked…minus one for some of the graphical issues (such as a cutscene that drops from HD to SD, and only has three frames of animation)…okay, the total is five. It’s a fairly average game in its genre.

A review copy was provided to GameCola by the publisher.

For those who wanted to be a fire fighter when they grew up. Or, who just want to throw people out windows.