Ahh, the Nintendo Zapper. Perhaps you were fortunate enough to have the original white and grey model before it was switched out for the bright orange trim. If you did have the grey model, then you probably got the Nintendo around 1987 that came packed with Super Mario Bros. / Duck Hunt. Normally, when someone thinks of the Zapper, memories of the barking dog and those dubious ducks come to mind. While I did put a lot of time in to this game, I also sunk a lot of time into Hogan’s Alley, often cheating by putting the gun right up to the screen. 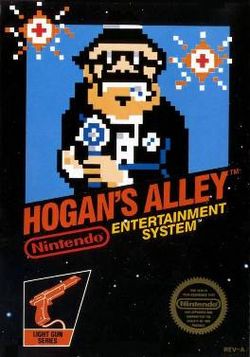 Hogan’s Alley offers a few different game modes to hone the skills of an up and coming sharpshooter. The game is actually based off a World War II training facility in Camp Perry. Years later, the FBI would keep the legacy going and open up a facility with the same name. 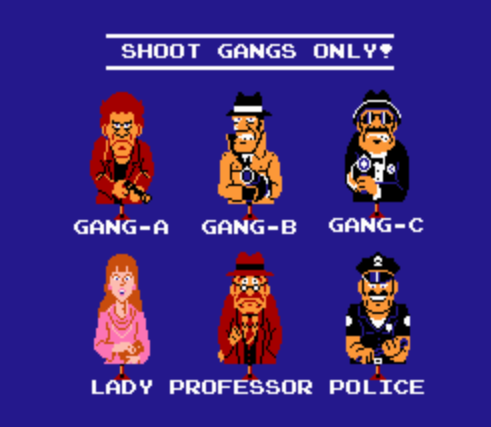 Fun tip: This screenshot is a composite because the three gang members flicker at different intervals. Very strange.

Game A offers a shooting experience you’d expect in a real life shooting range. Three target spots appear with friendly/enemy portraits. You must shoot the armed gangsters and avoid shooting the professor, woman, and cop. Skipping an enemy loses a life, and shooting a friendly also misses a life. As you progress, you have less time to shoot the targets. You’ll slowly start to sweat. You’ll feel the pressure and…bam, you end up shooting the professor in the shoulder. So much pressure! The “professor” must have been a mistranslation. He looks like a hopeless door-to-door salesman. 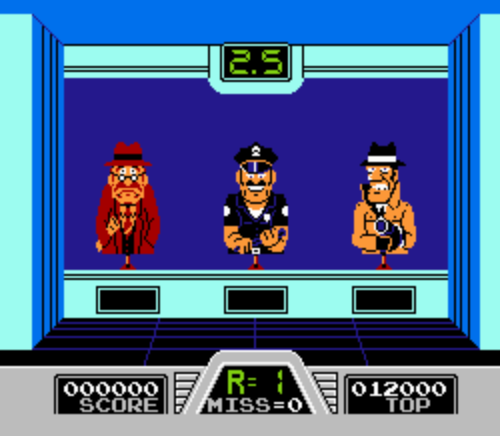 Game B includes the same portraits, but in an urban area. Targets pop up from windows, fences, and walls and move in to new cover. This mode is a lot more tricky since you don’t know where the targets will come out of. 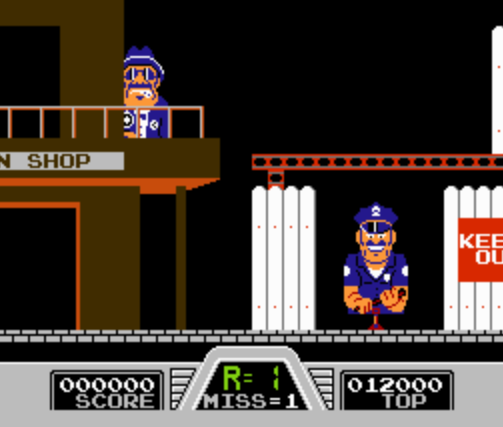 Finally, Game C offers a much different game style. Here, beer cans fall from the sky and you must shoot them to keep them moving to the left to land on different platforms. The platforms offer different point counts depending on how hard it is to get the can to land there. It’s pretty intense since the cans have a pretty small hit box and there’s strategy and geometry you have to do, figuring out if a can is going to land on the risky, profitable platform or not. 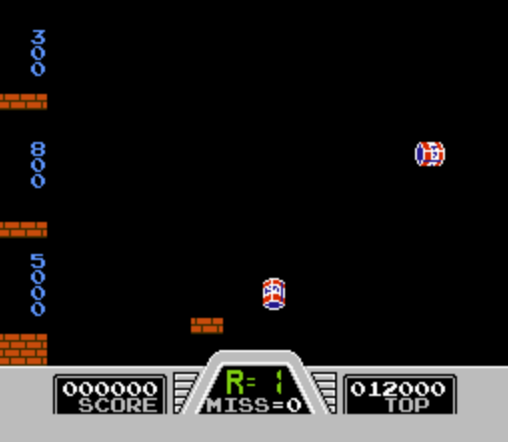 While this game variety is fairly limited, the progression of difficulty is pretty intense. It was certainly a good way to hone your skills with the Zapper and should be in any light gun enthusiast’s library. It would be nice to have a two player competition (although I don’t think the NES can support multiple Zappers), or the ability to start a run at a higher difficulty. Still, I’d like to see a simple concentric circle target, like archery or darts. It’s tough to think that there’s only these three simple modes in a full price title for $50 in 1980s money.

Trivia Man is a superhero who never answers trivia questions.