This is “Fabricated News”, coming to you live from ConCon, the convention-themed convention. We have just received word that the hit 1990s adventure game series Monkey Quest is getting a reboot.

“Yeah, I programmed the original game with three friends in my mom’s basement over the course of five drunken weekends,” said Dim Shafer, the original game’s Lead Developer. “So I thought, hey, maybe we could do that again! I’ve already purchased the booze.”

“What? Of course my programming knowledge is still valid. The gaming market hasn’t changed at all in the past twenty years.”

Videogame enthusiasts were heartbroken in 1995, when everyone on the original Monkey Quest team was fired and forced to get real jobs, like writing fake news stories for non-mainstream websites. Now, our overweight heroes will get a chance to relive their glory days thanks to Kickstarter. Fans of the original series have already donated two million dollars to the cause.

“I used to love Monkey Quest when I was a little kid,” said one of the series’ fans. “Sure, back then I had no standards or criteria for judging whether games were good or not, but that clearly doesn’t matter. When I got Monkey Quest 2 for my sixth birthday, it was the second happiest day of my year—the happiest being three days later, when I stopped wetting the bed every night.” 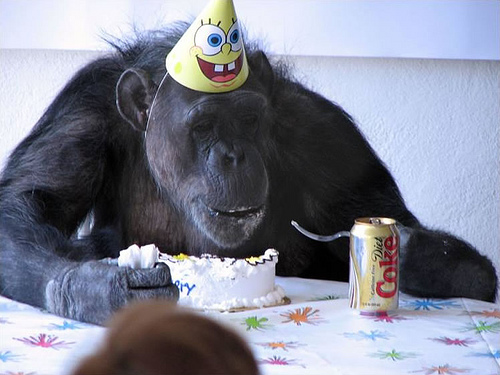 Monkey Quest is famous for its off-the-wall humor, which includes vague references, pointless references, in-jokes among the programmers, making fun of other people for being different, and knock-knock jokes. There is also meta humor which completely breaks the flow of the gameplay, and that one joke which is kinda funny but gets repeated so often that it loses its flavor.

At the end of the announcement, the game’s producer answered three questions from the audience.

“What? Games that are larger than 5MB? I’m not making one of those. That’s crazy. You’re crazy.”

“My favorite part of the original game was the Insult Fighting. Of course, no actual fighting was involved; you won by picking the correct response from a list of possible answers. Everyone knows that multiple choice exams make for fascinating gameplay.”

“What do you mean, ‘art styles’? There’s only one type of art: pixels. Right? We are going to use 256-color graphics, because it is cheaper and requires less talent—I mean, um, it works with the retro feel that I’m going for. There is no reason to change the series’ awkward, blocky graphics. They are perfect just the way they are.”

Sadly, there will be a bit of a wait. Monkey Quest 5: Milking the License Dry is going to be finished three years from now because work on the project will not start until the producers have wasted most of the funding. “Sure, we have enough money to make six games, but we’re only making one. Putting all of our eggs into one basket is a sound business strategy.”

No, not that Journey, despite what you might think based on my headline's hilarious reference. This Journey. The one by thatgamecompany, developers of the 45h greatest videogame of all time, Flower.