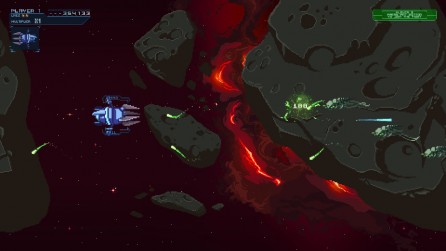 Alright, so maybe that didn’t happen—but that’s basically the idea behind Enemy Mind. Described as “Grand Theft Spaceship”, the general concept of the game is that you jump from ship to ship as you run out of ammo or take damage. There’s a wide array of different ships with different stats and abilities, so there’s also the strategy of finding your favorite ship and trying to jump to new instances whenever you can. It’s nice to see a new mechanic outside of pattern memorization and bullets everywhere.

There’s a huge amount of variety in the way different ships play, but a cool mechanic can only take you so far. What really kept me playing was the story. Most shmups are pretty predictable—you find yourself, for one reason or another, as the lone survivor of some catastrophe of some sort, and it’s up to you as the last remaining human to fight your way out alone. 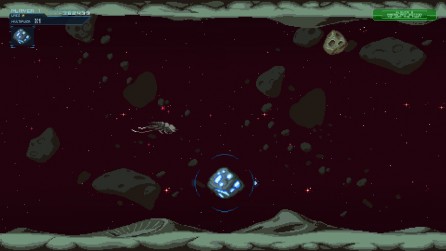 One of the ships you can jump into is a rock.

In Enemy Mind, you’re thrown into the middle of a battle between humans and squid-like aliens. Between waves, it’s slowly revealed through radio chatter and your own thoughts that you’re something different altogether. After defeating bosses, you get further glimpses into the memories of the pilots—and alien creatures—who you’ve jumped into.

So, the jumping mechanic isn’t just a gameplay feature, but something of a plot point in the overall story. As you progress, you uncover more details about the aliens, the battle between the humans and aliens, and who you are and where you’re going. It does a pretty good job at compelling you to keep playing, and it made me wish I was a little better at shmups. According to the global leaderboard, however, it looks like I’m not doing all that bad…although, the game just came out, so maybe the good players just haven’t come along yet. 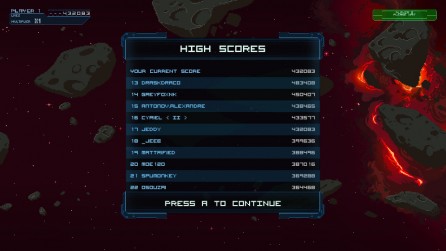 Really? I did that poorly and still got 17th for that stage?

Graphically, the game is the good kind of retro. Not the XBLIG or App Store kind of “I made this in MS Paint in five minutes” retro, and not even graphics that you might see in real NES or SNES games, but the kind of graphics that Super Nintendo games dream of having while they sleep on your shelf. The music really sets the mood, too, giving a good mysterious and uncertain feeling. With eight stages and a decent level of challenge, this game should last you a while.

The game really is the whole package. I don’t go around handing out high scores, but there’s really very little that keeps this game back. I’d definitely suggest Enemy Mind if you’re in the market for a space shmup . 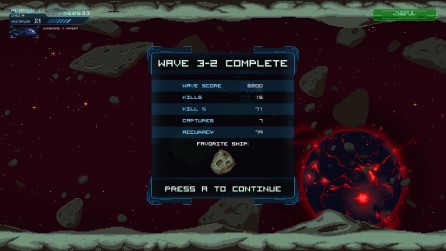 Yeah, that’s right, game, my favorite ship is the rock.

Well, it’s officially happened. After two and a half years of dating, I have finally succeeded in finding a videogame that annoys my gamer boyfriend as much as he hath done unto me. Incredible, I kn ...