In one of the most ridiculous and potentially hilarious videogame stories I’ve encountered in recent months, I was finally able to get an Xbox 360 working in my household. The 360 used to belong to my wife’s brothers and we received it more than a year ago. It came with no games, a wireless controller with no batteries, and no A/V cable. As I never planned to ever have an Xbox, and because I have a hyper-specific system for managing my videogame collection, I wasn’t sure what to do with it for a long time, so in storage it sat until I felt I had the money to get a $40 wired controller and new HD A/V cable or whatever.

About a year and a half later, money comes in and I feel like bringing my Xbox 360 to life. Buy a brand new A/V cable and a brand new wired controller. Go to storage to bring it out and…what’s this? Is that… Is that an A/V cable? But I didn’t take mine out, where did this one come from?

I go to inspect the bag that has the wireless, battery-less controller and…what’s this gray wire with it? What does it…does it attach to the controller to…oh my God, are you kidding me? I HAD A WORKING CONTROLLER AND AN A/V CABLE THIS WHOLE FUCKING TIME!? HOW IS THAT POSSIBLE!?

And voila (pronounced voy-la), a working Xbox 360 is mine. I did not have any boxed games with it and, quite frankly, I have no use for those games anyway. The reason I stay mostly as far as the Gamecube/PS2 era is because videogames have gotten too complicated for someone who grew up in the 8-bit/16-bit era. It’s not a supremacy thing, that’s just not where I want to spend what precious little gaming time I have these days gaming.

My main attraction to the Xbox then is—you guessed it—the Xbox Arcade and Xbox Live Indie Games sections. Coincidentally, by the time I was setting up the machine, Microsoft actually sent me a $2.00 credit email, and the first thing I bought with it was Vintage Hero from XBLIG.

Now I’m on paragraph 6 and finally talking about the game. Is that a record for how prolonged I can make a prologue? Say that 5 times fast. Do it, you whore. As we know, XBLIG is a throbbing congestion of garbage made by human gristle in between filling out applications for DeVry, so it took some investigating to see which game should earn my hard-earned buck (…that Microsoft gave me for nothing), and Vintage Hero kept coming up in recommended lists. As you can see, unless you’re blind and I need to start bothering Jeddy to make a braille version of GameCola that will open up the visually challenged to become part of our invisible fanbase that can read and then never comment on and leave surprising low beard scores for our reviews, Vintage Hero is a Mega Man clone and so far the best faux-retraux game I’ve played yet. 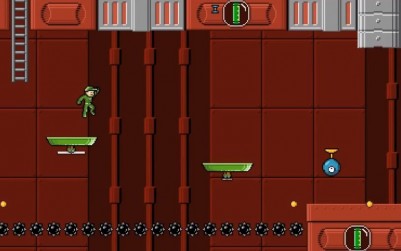 What makes this game different, and worth the pittance of price, is that unlike Oniken, it isn’t so obsessed with trying to match the LOOK and production of an 8-bit game as it is trying to match the FEEL of one. It’s like, you know how you go to a supermarket and there’s all these store-brand knockoffs and some of them don’t compare to the real thing, but then others greatly surprise you? This is a knock-off that gets it right while doing enough to keep itself from being sued by CAPCOM.

The story of Vintage Hero is total wank, and I won’t bother with it other than to say it adds some more scenes and drama than most Mega Man games offer. From the hub, you get a choice of four levels you can play as you want. In an interesting variation, and a smart choice the developers made, you don’t fight “men” or “robots”, instead you fight something more akin to the Wily Castle bosses in each stage while still syphoning their powers and using them against other bosses. The real meat of the game, the levels themselves, are pretty reasonable and reasonably long practical facsimiles of what you get from Mega Man, and the robot enemies are pretty competently designed as obstacles to your progress. The physics and total FEEL of the game matches the classic blue bomber titles quite well and it’s a smooth run for the most part overall. 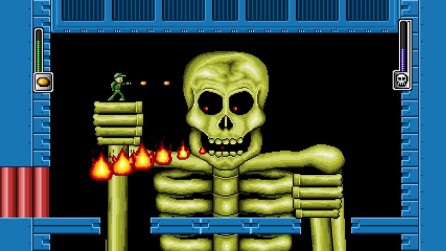 The most interesting thing about this game is that it actually lets you gain experience that you use to level up energy, weapon damage, weapon bullet SIZE, and defense. Basically, Vintage Hero is Mega Man with Zelda II‘s experience system. I haven’t played any newer Mega Man games, so I don’t know if they have or do not have a system like this, but I felt it was pretty unique and something that really helps set it apart from Mega Man. One level even appeared to throw out the Mega Man conventions altogether and use obstacles from Super Mario World!

But, as you can also guess by the screenshots alone (again, unless you’re blind and, even then, why are you on a website for videogame reviews anyway?) this game has some flaws that ding it points. The graphics, thankfully, did not receive the lion’s share of attention on this game, but it still makes for amateurish-looking sprites and designs that give the game an unbalanced look. Balance apparently wasn’t a big deal to the developers, as the game is rather easy to start with (although there is a hard mode I haven’t played), but has some really difficult sections here and there that I’d chalk up to not fully thinking through the design. 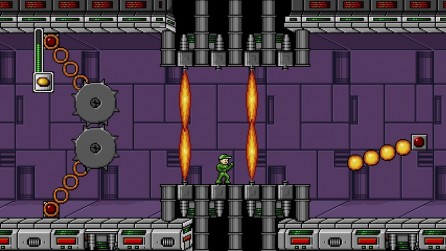 But, the biggest thing that bothers me about this game is THERE’S ONLY 4 FUCKING LEVELS. And, only two Wily Castle-style levels! How in the hell do you try to clone Mega Man and not bring the full level set in!? The ending was pretty anti-climactic, too, but my wife suggests that I possibly got the “bad ending” and I hadn’t had time to play the game again to find out if there’s another one. As a result, the game feels fun and familiar, but like it’s rushed and half-done, and the level-up system provides a depressing foreshadowing to this by just how QUICKLY you can level up.

Still, it’s only a $1.00. You probably have enough money for it in the crack of your ass, so it’s not like you’d really be losing anything giving it a shot. I wish it was longer so I could give it a higher score, but it is what it is, and it’s definitely worth an hour or two of your attention (though I better not find out you get a larger level selection on hard…that would piss me off).

Destructoid reports that at Comic-Con, Capcom completely lost all sense of shame, and announced that they're collaborating with Sanrio to make Street Fighter-themed Hello Kitty merchandise—i.e., Hel