Some things would be better left alone. Unfortunately, the owners of Freddy Fazbear’s Pizzeria found this statement to not apply to their business. After much remodeling and over $200 in paint, Freddy Fazbear’s Pizzeria is reopening with a new look, new animatronics, and a new…job offering? As if you didn’t have enough heart attacks from the last job, I’m here to present Five Night’s at Freddy’s 2. 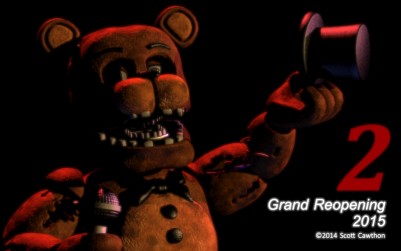 Hats Off For Your Splendid Return

For those of you who are new to this game series, Five Nights at Freddy’s is an indie horror game in which you play the role of a night guard at a knockoff of Chuck E. Cheese’s. Sounds easy, right? Just for the sake of time, the concept is to protect yourselves from the animatronics that are trying to kill you; if you survive for five nights, you get enough money to buy a gaming keyboard. The four main animatronics from the old location include Freddy Fazbear, Bonnie the Bunny, Chica the Duck, and Foxy the Pirate. As for the sequel, you’re introduced to new models of these classic cannibals, along with a new one (we’ll get to that pain in the arse later).

When you jump into your first night at the new pizzeria, you notice a couple things. In front of you lies a gaping hole leading to the hallway, as well as 2 vents—one on each side of you. Hang on to your helmets kids, because this is the biggest plot twist of them all: There’s no doors. For some reason or another, the owners of Fazbear’s Pizzeria didn’t find it odd to have a security booth with no doors. But alas, there is some hope to remain safe from these new animatronics.

As your good friend from the previous five nights begins to fill you in on the details, I’m sure you already moved your mouse over the red arrow. By doing so, you find yourself donned in a Freddy mask. Lots of questions must be filling your head right about now, but your good pal explains it all. By wearing the mask, you can fool the animatronics into thinking you’re one of them. However, this trick is not effective against Foxy and The Puppet. While I am discussing the dreaded Puppet, let’s move on to the various rooms. 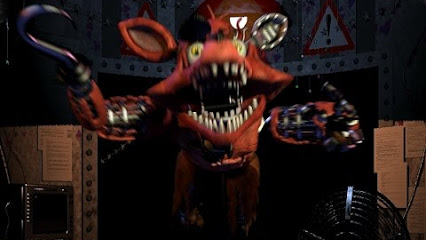 He just wants a hug…

When scoping through your cameras, you’ll notice several new rooms, including a maintenance room. In this room are the old versions of the animatronics. Of course, as luck would have it, these animatronics are still somehow functional and will stalk the halls at night as well. Although the building itself can’t run out of power, you are equipped with a flashlight that can. This flashlight is vital to see in dark spaces while viewing the cameras. Taking all this into account, there is only one room you really have to be cautious about: the prize room.

Within the prize room is a unique critter known only as The Puppet. Along with Foxy, The Puppet can tear your mask off and trigger a Game Over. This critter, by far, is the one I hate the most—but, there is hope. When viewing the party room camera, there is the option to wind up a music box. By keeping this music box wound up, you will keep The Puppet at bay. That gives you one less thing to worry about.

Considering the fact that I haven’t made it past Night 2 is personally saying something. I wasn’t really affected that much by the first game, but this game just tore my throat out (not literally). The first game gave you a “security blanket” in the form of the doors; the sequel yanks that blanket away and tosses you to the wolves—or, I guess, foxes…and, bears and ducks and rabbits. If you’re up for another round, I implore you to go check out this game. It’s now available on a Steam near you.