Breaking news! Japan released more details about the upcoming Phoenix Wright game that takes place in 1912! Specifically, they showed off the first case at an event called Jump Festa. Mr. Wright is the defendant, and he is being accused of killing someone in a cafe. A soldier and a disguised Russian man are involved.

More importantly, though, here’s the prosecutor. 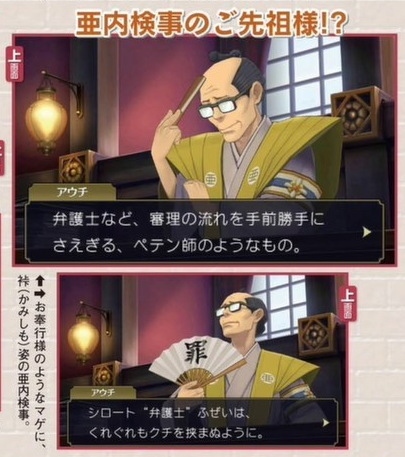 That’s right. It’s Prosecutor Payne in a samurai costume. Clearly, he is so upset about losing to Phoenix that he built a time machine to go back to 1912! He plans to have Phoenix’s ancestor thrown in jail, thereby ending the Wright family line! I have little doubt that Payne will lose the case, because he has the ability to time-travel. Even if he fails a lot, he can simply redo the case a hundred times until he wins!

Personally, I’m more interested in Case #2. It takes place in 1986, where Payne is the Chief Prosecutor and has conquered the world and rules with an iron fist. A young defense attorney named Miles Edgeworth discovers Payne’s horrible secret. The climax comes when Edgeworth interrupts Payne’s jacuzzi time with April May and the Fey sisters. (Finally, the artwork from the first game makes sense!)

Prosecutor Payne opens up his safe and pulls out a gun. “The other Payne told me one more thing,” Payne announces. “He said someday, a crazy, wild-eyed scientist or an attorney might show up, asking about that case. And if it happens…just kill him.”

Payne points his gun at Miles Edgeworth and fires. What happens next? We won’t find out, until the game is released. 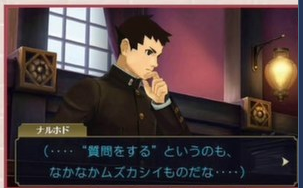 Also, since this game takes place in 1912 and part of it takes place in Great Britain, my guess is that the sinking of the Titanic will be involved. No word yet on whether or not Prosecutor Payne is responsible for the Titanic disaster, but I suspect he is.

For this year’s January issue, Vangie and I are switching places; I’m writing her column and she’s writing mine. This means that for this month, and this month only, you, the reader, can become ...