In a castle, two swordsmen quarrel; each victory brings more contenders. Swords are tossed among the clouds as deft acrobatics are performed between two competitors struggling to advance. In the forest, contestants ambush each other in thick grass, hoping to earn passage forward. In the darkness underground, in a mineshaft, someone is kicked into a hole as their opponent runs onward for the faint chance of victory. Many compete, and many stand in the way of others, for there is no sport grander than the duel. However, no matter how many lives are lost only, one may reach the end. Only one fighter is skilled enough to stand before cheering nobles and meet their fate. For the serpent only chooses one—and maybe on this day, you will be chosen by the… 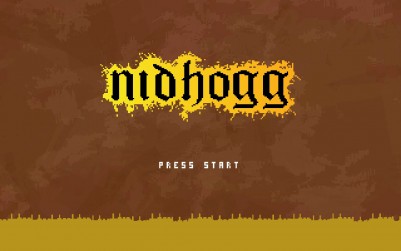 Nidhogg is a competitive action game based around the concept of fencing. It’s tug-of-war with a medieval twist, as two sides struggle to advance in a level. You take control of one such contender, hoping to reach the end and prove yourself worthy. With four stages, you use your skill to get past other hopefuls for a chance to stand in front of the cheering crowd. You use your fencing skills, reflexes, and the environment around you to accomplish this task. The game gets rather intense and whoever is winning or losing can change with just one well-played move! 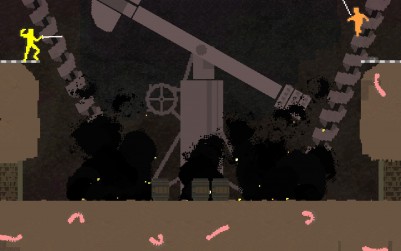 The game is really simplistic in its controls. You use the WASD keys or gamepad to move, and the controls are tight and responsive. Swordplay is done by moving the sword up and down, thrusting it, or throwing it (in extreme cases), and is the core of the gameplay. Through parrying your opponent you can disarm them, allowing you to deliver a strike. If you’re disarmed, you can still fight your way to victory using punches, jump kicks, and leg sweeps. The gameplay is primarily skill-based, though errors can shift the tide of battle very quickly, and a lucky strike can cost you the game! The game has a two-player mode, both local and online, and also supports tournament structures. The basic game is a time trial system, and it’s a lot of fun—especially with the tricky AI. The game’s overall a blast to play! 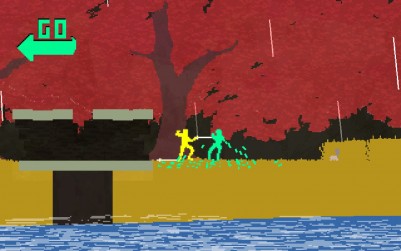 They have made worm’s meat of me!

The graphics are simple yet vibrant and done in the style of pre-NES videogames, but with a wider color palette. Make no mistake, though—the game does impressive things with the graphics presented! Backgrounds are interesting and animated, and even when the background is static the environment of the stage is beautiful. The characters are like silhouettes and the game feels almost like a stylized duel sequence from an action-packed movie, at times. As well, each area has its own unique visual style and you won’t confuse one segment for another. 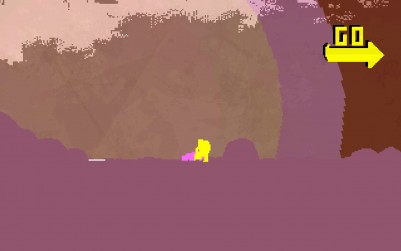 The game has no story; it’s all about the action. Characters have no backstory, they’re just monochromatic silhouettes. The game doesn’t pretend it’s anything that it’s not, with no story to start and no reason given for why you’re fighting. It’s presented as a sport that everyone just accepts exists, right down to the grizzly end. The game scores no points with me on the social scale, but it also doesn’t lose any points. It is just the sum of its parts, no more or less. 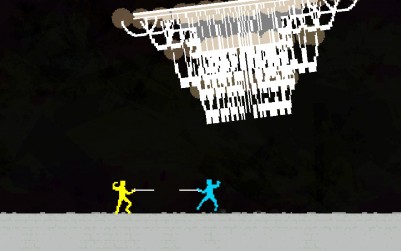 At last we finally meet.

Would I recommend buying this game? Of course! It’s fun; it’s intense! It can get really ridiculous if you’re good enough at making it be. It’s also cheap and indie, and a good gift for the holidays! 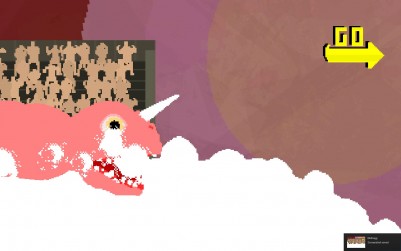 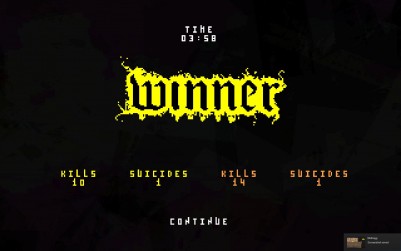 You know how stories normally go, right? You've got a hero and a villain and a bunch of things happen, and then there's a moral at the end to warn all the youngsters listening to the story about how t