Plague Inc. is a game that was originally made for Android and the App Store. I haven’t read up much on the game, but I have played the iOS version and I can tell you that I like the PC remake, Plague Inc: Evolved, better. I honestly can’t tell you why. Maybe because I played it first. Maybe I like the look better.

The only goal of this game is to create a plague that will eradicate the human race and all other life on Earth. Death to humans! You can name it (if you want to be witty, name it stupidity. Hah, you’re hysterical my friend), and then you choose the genes for the tiny killer. This can give your killer a bonus in DNA points from the cold or the heat, make it something that develops on its own or you can prevent it from developing so you can build up DNA points to spend on deadly symptoms when everyone in the world is infected.

Picking a place for the agent to start out depends on how well it can get around, the climate it can get around in, and the place’s temperature, whether it’s rural or urban, and whether the country is wealthy or poor. Choosing a place that is wealthy can result in the agent being hindered in its spreading due to people picking up meds that can slow or stop the agent from spreading. Choosing a rural area can cause a slow the spread. Choosing Greenland a starting point could go well…or, it could go very poorly. They have one port and if they close it before anyone is infected, you’re done. You have to eradicate the humans, not just kill a lot of them.

There are few a types of agents you can choose from: bacteria, virus, fungus, neurax worm, parasite, prion, necroa virus (zombie disease), nano-virus, bio weapon, and simian flu. The simian flu is actually supposed to promote the new Planet of the Apes movie, and includes things like labs that are set up to study the agent. I haven’t played that one much, but I’m sure it’s challenging. You can select genes to help you on your way to destroy all life, but you have to unlock them first. The easiest way to do that is to play through all of the agents on easy mode and then go back and play through normal. Genes, as I already mentioned, can boost or hinder development in symptoms and give you a DNA point boost when it starts in a certain climate. Pick a place and wait for the disease to spread. 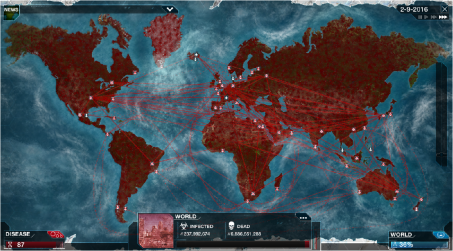 After starting, you may have to wait a bit before the agent spreads. While it does that, you watch for DNA points to pop up. Having a lot in stock can come in handy for upgrades to the disease. You can make it weather resistant, medicine resistant, and even cause the agent to change genetically so that doctors will have to spend a longer time figuring out how to stop it. You can also use DNA points to develop symptoms like vomiting, coughing, fatigue, boils, etc. Lastly, you can choose how the agent is transmitted. You can choose airborne or waterborne, which effects airplanes and boats, or maybe vermin and livestock or through needles and blood. DNA points are also earned when the disease spreads to another country, indicated by a red bio hazard symbol.

Now, since doctors are, in fact, a thing, there are people working against your agent to cure anyone who is still alive. There are ways to stop the cure, and the most effective (at least that I’ve seen) is developing symptoms that hasten the death of people infected. Other ways are available, but they haven’t done much as far as I’ve seen. Once the cure gets to 100%, you may be out of luck unless you’re playing as the necroa virus, where people will come back from the dead and eat any survivors. Like the DNA points and bio hazard points, they give you blue cure bubbles to pop to slow down the cure. It doesn’t help very much, in all honesty.

I’ve never been overly fond of strategy games, but this one managed to have me playing for hours. All of the agents require a different type of strategy. My only problem with the game is the so called “boosts” that you’re supposed to get from the genetic makeup you choose before you plant the agent. It made me hopeful, like I would get a substantial boost. I didn’t notice a change in the amount of DNA points I received, though. That’s literally all I dislike. Otherwise, the game is great.

We make fun of just about everyone who writes for GC.