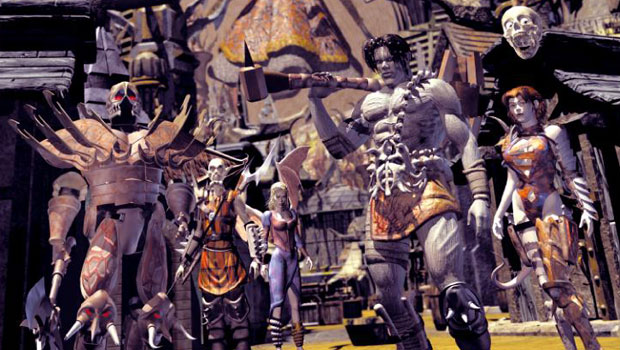 A stone door slides open, and a slab is pushed through by a shambling body. The slab contains the corpse of a scarred man, with new cuts into his body. As the slab ventures further into the compound, the body twitches; flashes of memory pass across your eyes. With each jerk, memory flushes into your vision. Memories of loved ones and old allies. Memories of long-dead enemies. Each one fleeing before you can truly grasp what you’ve seen. People in the thousands, all dead and blaming you; a shelf full of skulls, all turning to glare at you. Visions of vicious combat that would leave lesser men dead and in many pieces. Finally, the vision of a ghostly woman looking at you with deep sadness in her eyes. You jolt awake in a lab smelling of embalming fluid and entrails, as a skull flies toward you, signaling the first step in a quest to find out a question that burns in everyone’s mind. “Who the hell am I?”

And it really does hurt.

Planescape: Torment is an isometric computer RPG built in the Infinity Engine made famous by other classic Black Isle games such as the Baldur’s Gate series and the Icewind Dale series. When it was released, Planescape: Torment was not a success as far as sales went, the game being probably one of the least effective releases. However, it became a cult classic and is even now considered to be an unattainable standard to hold any other game to. It is an undeniable classic, only fifteen years old and yet still holding one of the most unique stories ever told through the videogame medium. Met with critical acclaim when released, Planescape: Torment has ended up shaping modern-day RPGs in many ways that are impossible to miss once you’ve experienced this game.

You’ll hear this a lot.

As an isometric RPG, Planescape: Torment controls through a top down, 2D, point-and-click interface. You control a party of up to six characters, each with their own unique skills and abilities, utilizing them to clear the challenges ahead of you. You open an interface wheel to access their abilities and items whenever necessary. Through innovative usage of dialogue options and environmental interaction, you make an effect on the game that fighting and magic simply cannot. Through combining these two systems, you interact with the world in ways that would revolutionize RPG gameplay for years to come. You play the game in real time, though you can set it to pause whenever combat turns begin, and it can get intense if you’re not careful about managing your party’s capability. This powerful focus on combat, environmental puzzles, and dialogue options is what made Planescape: Torment stand out among other Infinity Engine games, and other computer RPGs of its time. 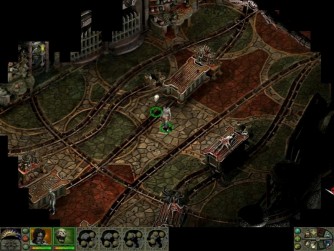 The story starts out cliché: You’re an amnesiac that wakes up inside of a morgue with no clue what to do or where to go. With the aid of a talking skull and a journal penned on your own flesh, you have only a single lead to go by. Following the strings leads you to a conspiracy that has followed you across many lifetimes, as you possess true immortality and the enemies to match such a condition. However, the main story is actually far from cliche, as you find out that not only are your enemies external—they’re also internal. Some party members have a vested interest in your failure, and your past lives have even sabotaged your efforts to accomplish the task that they failed to complete. But what’s even more compelling is that, along the way, you meet many unique people who ascribe to unique philosophies that govern their lives and influence the world around them. You meet creatures broken by the worlds they’ve lived in trying to fix themselves and become whole again. You answer hard-hitting questions regarding truth, existence, morality, and the value of life. You must explore emotions such as love and regret; you learn about art and question what it means to be art; you study sensation, life and death, and even what it means simply to be. Through the game, one big question, posed as a difficult riddle, is presented to you: “What can change the nature of a man?” And, you can even answer to this question, too. For all of this, the game rewards you for going through with its philosophical thought experiments. Through interesting story, powerful game items, and even unique resolutions to scenarios you are rewarded for thinking about the story and the philosophies presented to you. 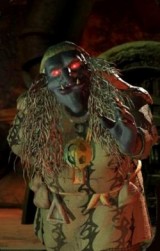 “The past is past, and histories care little for a-speaking the truth of it.”

The game is set in the Advanced Dungeons & Dragons 2nd Edition setting of Planescape, one which is unique among other Dungeons & Dragons settings. It connects the other settings through mystical portals that allow you to encounter characters from all sorts of settings, and that alone is an amazing concept. Even better, though, the setting focuses less on dungeon diving and hacking and slashing and more on talking about things and thinking of things. All of this is reflected in Planescape: Torment, and it goes even further than that. Your party composition is interesting and unique, full of dramatic souls that you’ve met along your travels in this life and others. Reformed demons, corrupt beings made to represent pure order, chaos mystics, and even an amorous talking skull are just some of the companions that will join your travels. As well, the game tries to do away with certain fantasy cliches, and one of the biggest is the lack of swords in the game, and the focus on nonconventional weapons. Daggers, maces, teeth, brass knuckles, the body parts of fallen monsters, and even your own body parts round out the weapons you can use. As well, you can equip eyes and your own internal organs as rings, bracelets, and even your own eye sockets are equipment slots. Your enemies are not the orcs and goblins of normal RPG fare, instead they’re demons and angels, otherworldly animals, and robots. Even your own past lives are your enemies, though in a less direct sense, and some of the most difficult encounters aren’t ones where you need to stab your way out. In all the setting enhances the game, trying to drop fantasy cliches places you in an alien environment full of wonder, the unique items and creatures makes it difficult to know what you’ll encounter next, and where exactly the story will take you. 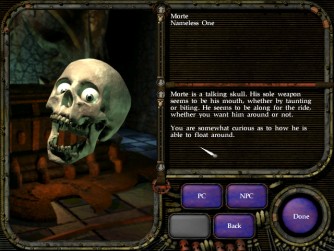 You never do find out.

Featuring beautiful visual art, visceral sound effects, and haunting music this game has masterful presentation! The visual arts are beautiful, mixing in 2D artwork with 3D effects and animations! It even contains a journal of art for the various major and minor characters you meet through out the game! The sound effects are crisp and range from gruesome to absolutely enchanting. They give you a sense of the place you’re in, constructing some wonderful ambiance that compared even to games which dedicated their development mostly to their atmosphere! The music is a brooding score that’s evocative, bold, and gritty. It triggers during dialogue options, or when characters appear on screen, seemingly at random until you start picking up on what each piece of music means. Some are environmental, but many do occur when the game begins discussing certain themes, when characters are having their moments, and—of course—when you’re about to enter combat. All of the art assets of the game are brilliant, and even today are without compare.

These names mean little now, but back when Planescape: Torment came out they hearkened back to a forgotten Dungeons & Dragons world.

As it was made in 1999, the game has a share of flaws that are now overcome, and this reflects poorly on the game. In these days, your average computer RPG allows you to zoom and pan the camera, something that wasn’t really possible in the Infinity Engine that Planescape: Torment was programmed in. Modern RPGs allow your party members to use their own abilities without your input, or contain easy ways to command them to use their skills; however, this game requires you to either pause and open the spellbook screen, or right click and access a clumsy wheel representing various abilities, game actions, and skills available to your character. This wheel method is also the only way to access spell-like abilities that your characters possess, as they don’t count as either spell type and are not listed anywhere else. It’s clumsy compared to earlier Infinity Engine games, but at least the game’s still playable. 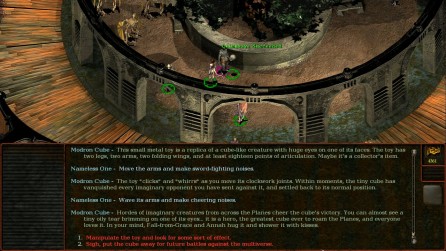 Playing with dolls is definitely an option.

The only true downside is the lack of social sensitivity, really. In the game you play a heterosexual male of uncertain ethnicity. He romances only ladies, and engages in sexual acts with only ladies. The two female party members (out of seven total party members) are both romance options. One party member is a construct from a society with no concept of gender, but still has gendered pronouns. The other four party members are all heterosexual men, one of whom is always making quips about how he wants “alone time” with every woman he passes by. The game has sex workers, but they all exist to be accessed by the aforementioned party member. For all its creativity in other spots, Planescape: Torment sure didn’t stray too far in making the characters different from what we’d normally see with regards to diversity. At the least the game passes the Bechdel test, but that’s setting the standard really low. But it’s really quite a let down that an otherwise amazing, progressive videogame fails so spectacularly in this department. So, we can have a skull, a suit of armor, a flaming man, and an alien mystic from a world of primordial chaos, but we can only have two girls and both must be thin and pretty?

With all that, is Planescape: Torment a good game? Yes, it certainly is a good game. It has a deserved spot on many Top Games of Ever lists, and for many of the reasons listed here. It’s probably one of the best games made by Black Isle Studios, and is probably one of the best games of the ’90s. It asks tough questions with regard to philosophy, rewards the player for being more discerning than treating every area like a slaughter house, and presents you with gripping and complex characters. The setting is unique and probably something we’ll never see again—least of which because it’s wrapped up in a rights battle, and its approach to adventure and its progression is something rarely seen. In spite of all of this, it still falls short on representing marginalized groups, and that is a shameful thing that continues in modern RPGs to this day.

There are as many grains of sand on this stupid beach:as there are shooters in the arcades. You can take them out one by one, but the pile just never seems to end. The beach stretches on, and on, and