So NicoNico was a HUGE event for Dai Gyakuten Saiban. I’ve been holding off on writing an article because there’s actually been multiple streams of gameplay footage since the last article. I’m going to try to stay out of spoiler territory (I’ve been keeping away from specifics for myself), so I’ll only cover the highlights and background info for the first case, because I like it. I’m going to try. I’m really excited.

At the beginning of this month, a “new” (read: both old and new material) trailer was released on Capcom.TV. It’s pretty similar to stuff we’ve already seen, but still worth a watch.

Then we hit NicoNico. And boy, was that fun. First, I have for you a 45-minute demo, taking you from the start of the case to the first cross-examination.

In this first stream, we learned that the official localized name of the first case is “The Adventure of the Great Departure”. DGS will have anime cutscenes like Professor Layton vs. Phoenix Wright (insert praying hands emoji for “bless” or whatever the kids are saying these days) and will also feature the ability to start an episode from different points (i.e. second day of investigation, third day of trial, whatever floats your boat) after clearing it for the first time, a la Dual Destinies. Here’s a couple of highlights from the stream. 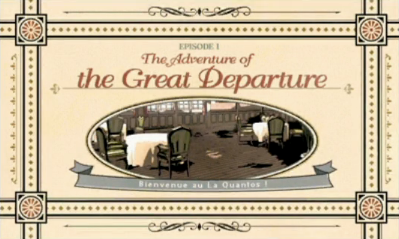 Without getting too much in detail, we learned that Ryuunosuke has been accused of the murder of John Watson (wait a second…CRAP) and Mr. Attractive up there, Asougi, is serving as his defense. Asougi plans to go to England to study law, but if he loses this case, he’ll lose his chance to go. So of course, Ryuunosuke steps up to head his own defense. The victim was a foreign professor teaching at a Japanese university, which would obviously cause an international incident if the case is handled incorrectly. Although pressed to confess, Asougi asserts that Ryuunosuke is innocent and demands that the trial continue with the first witness, a waiter. And that’s where that demo ends.

Thoughts? Visually stunning. I read on Twitter that this game is actually being motion captured—something new for the Ace Attorney franchise. So all that detail I was gushing about last time? Mocapped! It looks phenomenal. I don’t really know what else to say, other than I’m excited. But you knew that already.

Then on the 13th, DGS was featured in Famitsu yet again! The article mostly focused on Case 2 and the investigation mechanics. See the full scans on Court Records here (just click on the spoiler box).

So what did we learn from this? Well, Case 2 is officially called “The Adventure of the Friend and the Speckled Band”, based on the Sherlock Holmes short story of almost the same name. It’s set aboard a steamship bound for London called the Alaclair. Ryuunosuke is suspected in ANOTHER incident, this one involving a snake and a locked room. As the article says, wherever mysteries are, Sherlock Holmes is also. So this is Ryuunosuke’s first meeting with the Great Detective. Two new characters are also introduced, a fifteen-year-old ballet dancer and a sailor who was patrolling the deck at the time of the incident.

Investigation looks pretty similar to a typical Ace Attorney game: examine, speak, move, and present. New features include areas you’ve already searched being marked with a check and Susato letting you know if you’ve missed something if you try to leave an area before finishing. There’s already a preview for the next article, so here’s hoping that comes soon!

Please tell me you guys are as excited as I am. Information is somewhat on the down-low given how soon the release date is (for Japan anyway), but everything we’ve seen so far is pretty awesome. Get excited, guys! Fangirl out!