Have we ever talked about Nick Arcade on GameCola? I’m pretty sure I mentioned it on the podcast once or twice, if only to complain that I had to wake up early and sit through Wild & Crazy Kids just to catch the reruns—but, it was totally worth it! Even if the kids never seemed to know what they were doing, and even if some of the show-specific games didn’t really look that great, there’s something about Nick Arcade that still entertains me even going back and watching it now.

So, when Editor Emeritus Paul Franzen pointed me towards the Enthlevel Kickstarter campaign, you can imagine my response! 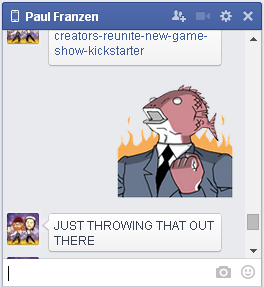 Man. The idea of a modern videogame game show. A LITERAL game show! The thing that always held Nick Arcade back was that the kids always looked super confused in the coolest portion. You know, the part where they play the game! Of course, it’s easy to sit back on your couch (or, on the floor in front of the TV to be closer to the action!) and say “Come on, you just had to hit the coin!”…but, realizing that they were probably standing in front of a green screen and trying to figure out what they were doing by an off-screen TV, you can have a little more sympathy.

But, we have all this cool technology now, right?! In the year 2015, virtual reality and motion capture are commonplace! A modern videogame game show is pretty much guaranteed to be great. And, did I mention that this is being developed by the original creators of Nick Arcade, including the original host and the original announcer? Did you even watch the video on their Kickstarter page? Go watch it! Here, have the link again.

Seriously, though, if you want to see this happen, you have to back them! The $350,000 goal only gets them a presentation reel to show to potential producers—they need over a $1 million just to make an actual pilot episode. Don’t have any money? Do what you can to share the news! Like them on Facebook, follow them on Twitter! We can make this happen!