For a solid year now, my videogaming world has been flipped upside and down. Where I was largely content with the collection I’d had forever and thinking I wouldn’t get much from then on, all that completely went out the window once I got the Xbox 360 working. Since then—and moved even further by the medications I’ve been on this year—my gaming world has seen addictions come and go. One of them was a nearly insatiable need to try the late ’90s first-person shooters, and this addiction has lasted longer than others.

PC be damned, the N64 is my favorite FPS machine ever. Doom 64, Turok: The Dinosaur Hunter, my love-hate relationship with GoldenEye, Quake and, hell, I even find myself craving Quake II for the N64 these days. Today, I officially add Duke Nukem 64 to the list because DAMN this game is still awesome.

I missed out on Duke Nukem for the most part. I remember playing a demo of it in the late ’90s, but there was no way my mom would allow a game like this on our shared Macintosh whatever 5200. Interest diminished for a long time after that. Then 2014 came around and it was like HOLY SHIT I MUST PLAY THIS IMMEDIATELY. I was able to track down a relatively cheap copy to get my start and now I see what all the fuss was about—both ways. 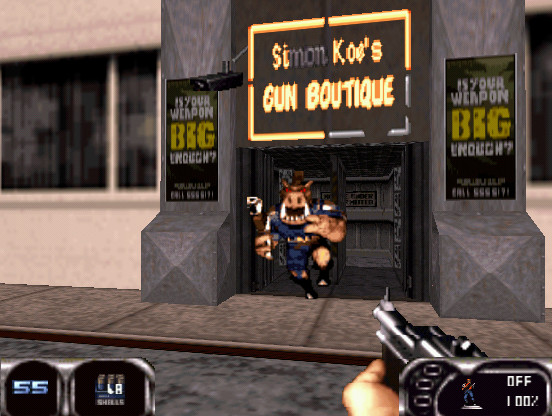 For those like me who missed out, Duke Nukem 64 is an enhanced version of Duke Nukem 3D with many non-foundational differences made to the game. Duke Nukem 3D itself is essentially the natural evolution of the Doom engine, adding a half dimension to the gameplay, fitting more shit on screen and really expanding the horizons that Doom provided, but still feeling about the same. You go through level after level fighting your way through insane hoards of enemies single-handedly, avoiding traps, scouring the layout, finding secrets, collecting keys, and hitting the end switch. The regular Doom seems almost simplistic by comparison as Duke Nukem really amps up the traps, makes the environments a lot more interactive (and dangerous), and increases the general difficulty. I found myself REALLY struggling through the game and having to think outside my previously established box to get through.

A lot of the struggle comes from the fact that, unlike the PC version, you can’t save anywhere you want—and this is a game that REALLY requires something like to get through. Many stages are set up to be as challenging as they can be without being impossibly cheap. Remember that huge, gun-and-grenade-toting fuck you fought as a first boss? The one that literally NEVER misses once it sees you? Yeah, next level or so, here’s FOUR of them who are smaller with slightly less health but still pants-crappingly tough all the same. Spend 30 minutes just barely getting through the level? Well, here’s a surprise room opening up where you have to fight three floating rocket launcher assholes with five machine-gun lizards! You never seem to get a real warning for when the shit hits the fan and the only way through is to just keep doing it over and over again, abuse the secrets and hope you make it.

Then again, if the game were as easy as it should be for a relatively soft FPS player like me, then Duke wouldn’t be quite the manly icon of throbbing machismo and movie quotes that he is today. How did Duke get to be the hero of the world? BY SURVIVING THIS GAME! No other reason comes close, and no other man could run at 27MPH shooting shotguns and rockets and grenades AND kicking his foot out at the same time. 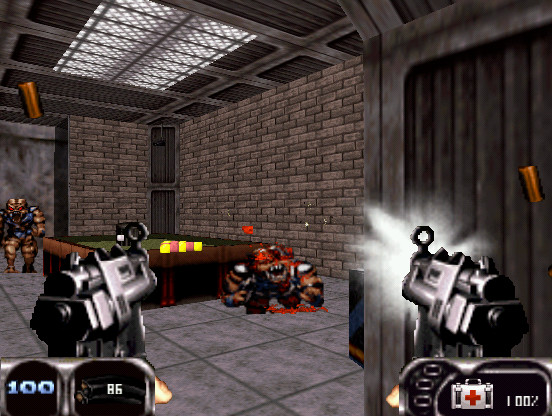 This game gives you a lot of weapons, and most are pretty nicely balanced (except that damn shrinker/expander thing). Enemies come in wild varieties and often carry the same guns you do. The level of interactivity is also really tits in this game because there are secrets and hidden items and fun stuff to find and use practically EVERYWHERE. You can even use the toilet AND THEN DRINK FROM IT LATER. There are some parts that even require you to be minimized so you can complete the stage. The levels seemingly NEVER run out of ideas and ways to put you up to the test of being the baddest of all asses, and it never runs out of surreal-looking comic touches along the way to keep you entertained. Blues Brothers performing in a club while you blast murderous aliens to bits seemingly without them even noticing? Why not?

The graphics look as good as the N64 can handle, very much like Doom 64. There is no music to speak of for some reason, but this also makes the game even more atmospherically tense. To date, the controls for this game are the best I’ve ever played since I fucking HATE trying to play this game with mouse and keyboard and no one seems to know how to get the fucking analog sticks running right. With the N64, it was done almost as well as you can reasonably expect. 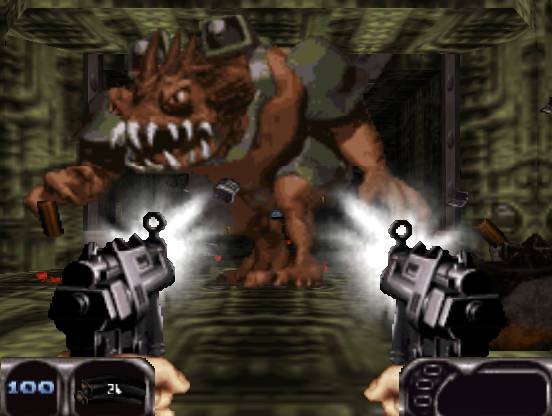 And most of all, the game’s just got it—that hidden factor that just makes all the sweat, blood, and entrails you spew to get through it worth it. As bad as a level can get, and even having to start all the way back at the beginning, it never loses the addicting quality of trying to get through it again. It’s hard, but not impossible, and the challenge does get addictive after a while. It’s just FUN, and I fucking wish more modern first-person shooters were done like this.

What, no Duke quotes? Nah, let’s just get to the numbers.

With the State of Emergency lifted in 1990 and the apartheid system on its way out, the stage was set for a South African Formula One Grand Prix. Little did anyone know that the GP would only be run f ...