Although I finally broke down and saw a dermatologist, I still check out the latest updates on itch.io from time to time. I normally limit myself to paid games due to the constant deluge of terrible free games, but something recently possessed me to just check out the “RPG” category instead. I’m glad I finally did, because I’ve been missing out on Heroine Dusk for a long time, apparently. 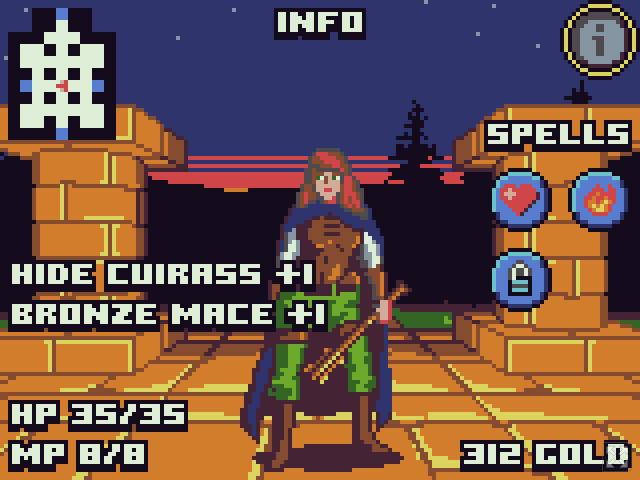 It has some great, limited-palette artwork, and I love the “dusk” motif. The music really works together with the art to give the game a heavy atmosphere. I love the small numbers and incremental progression—without leveling, pretty much entirely based around equipment and exploration. Using the skills you’ve been using during battle for so long to start solving non-battle problems? Always a great time. There’s not a whole lot of text in the demo, but a curious world is built before you that pulls you in and makes you wish the game was finished already.

Which is the start of the problems. Apparently, while I only stumbled across the game recently, Heroine Dusk has been in development since around 2013. From what I can tell, there hasn’t been much progress in the past year. It doesn’t seem like the project is entirely dead, which is good, but finishing it up doesn’t seem to be high on the priority list at the moment.

Depending on what platform you’re playing on, the controls can be a tad goofy at times. If you’re not playing on PC on the official site (including playing on its itch.io page), then you’ll be stuck with clicking or tapping. Tapping probably isn’t too bad, but there’s a lot of moving the mouse around if you’re stuck without the keyboard—and, when 90% of the screen results in “move forward”, it can get annoying if you’re trying to navigate some of the areas that require a lot of turning. There’s also no way to turn the music down (or, off) while you’re playing, which can be annoying. The music is great, but sometimes I need to hear something else on the computer without having to close the game…!

Granted, the game continues where you left off if you close the window, so that’s really not such a big deal. Honestly, the complaints are pretty minor in comparison to how engaging the game itself is. I know I talk sometimes about Arcana, but there’s just something about those old 2D first-person RPGs that really get me. It seems like a game I’d really enjoy once it gets completed, and I’d say the demo is well worth checking out. I guess all I can do for the moment is wait (and, post about the game on GameCola)…! 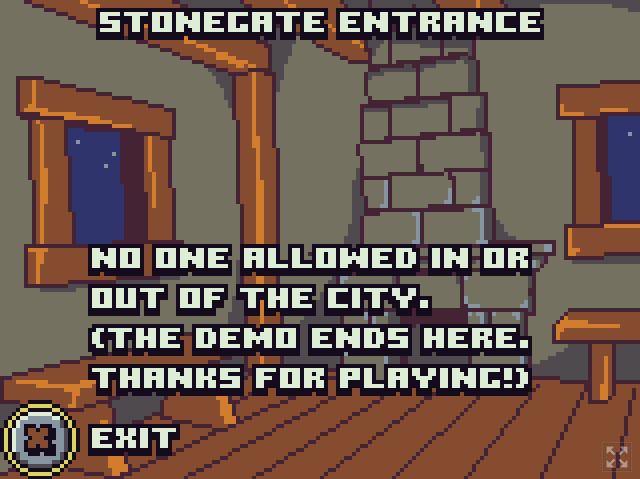