Reveries: Soul Collector is the sequel to Reveries: Sisterly Love, and they have almost nothing in common besides the title. I’m fine with not seeing any of the old characters or locations, but I am sad that the awkwardly-translated love song didn’t make a reappearance.

The story is that the evil Dark Wing plans to open a door to the demon world by collecting four souls. They are the Soul of Greed, the Soul of Envy, the Soul of Spite, and a Pure Heart. Is it just me or does that last one not fit the list AT ALL? It’s not even a type of soul. It’s literally referring to someone’s heart.

No matter. That is Dark Wing’s excuse to kidnap your lovey-dovey fiancee, King Richard. He is going to steal Richard’s heart by turning him into a tree. I don’t understand how that steals his heart, but trees seem to be important to this game. You even have a tree-buddy who helps you retrieve items that are too high to reach. Tree-Buddy falls somewhere between “cute animal companion” and “pointy, prickly thing that probably stabs you by accident”.

The first third of the game is the best. It has the most storyline, the most characters, the largest variety of locations. You explore King Richard’s kingdom, and you make your way to Dark Wing’s volcano lair. You find Richard, then you find the cure for his tree disease. Luckily for him, burly lumberjacks are not involved. 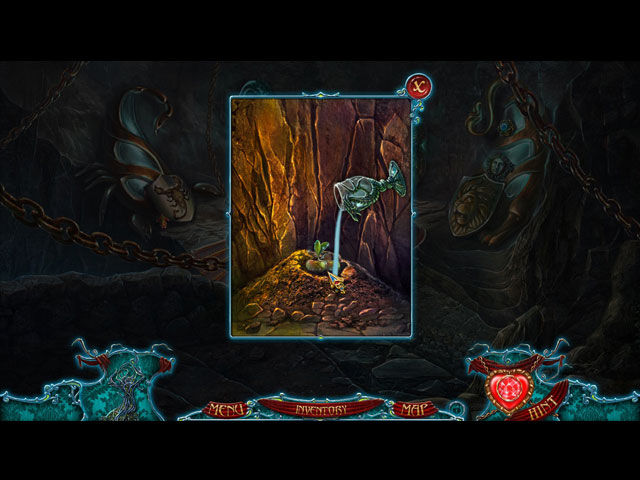 The storyline takes a strange turn here, as we have a beautifully-animated fairytale scene. It is revealed that Little Red Riding Hood was bringing poisoned pie to her grandmother, so Dark Wing disguised himself as a wolf and killed her. This scene has nothing at all to do with the story, and it’s never mentioned again. It’s like you’re having dinner at a restaurant, and the waiter does a tango to bring you a fingerbowl of popcorn. It looks impressive, but it’s not filling.

The final third of the game has you storming Dark Wing’s new volcano lair. He kills King Richard, and PLOT TWIST! Dark Wing is actually a good guy! He committed murder six times at this point, but no more! He turns on his demon allies and decides to destroy the portal to the demon world once and for all!

And by that, I mean he gives you the soul sphere, and asks you to destroy the portal for him. While you’re there, could you pretty please save his mother who is being held captive? Because Dark Wing isn’t evil; at heart, he’s just a momma’s boy.

I’d say the final third is better than the middle third, but not as good as the first third. The scenery looks good, and the demonic locations are appropriately spooky. But there is an over-reliance on “your character must collect items to solve puzzles, long before you know what those puzzles are”. The worst offender is when your character gets a wishing seed, to wish for anything she wants. She uses it to wish for a toy windmill blade. This makes absolutely no sense…until ten minutes later, when she finds a windmill without a blade. I can only conclude our heroine is psychic. 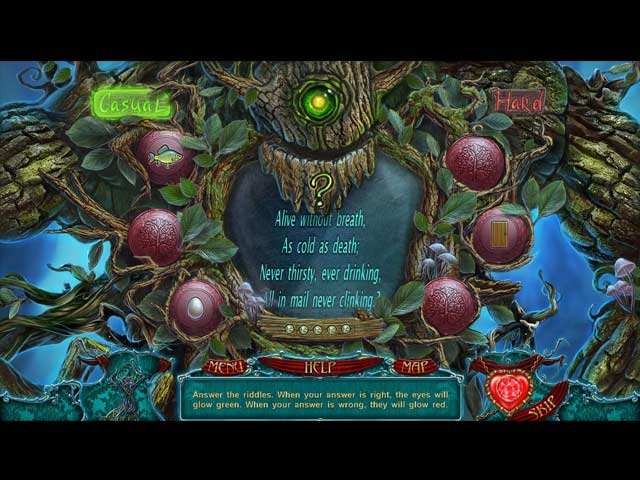 Oh, yeah, this one challenge was “answer riddles taken directly from The Hobbit“. It was neat.

The game took me an hour and twenty minutes on my first try. In contrast, the previous game took me about two hours to play on my first try. Either I’m improving drastically, or this game is way shorter than the first. More likely, though, this is a calculated plot to make people buy the bonus edition, which has extra gameplay.

The only other thing I want to note about this game is that you don’t have to solve hidden objects challenges. Instead, you can play a matching game or a jigsaw puzzle—the game alternates between the two options. I liked that option, but the jigsaw puzzles were too difficult. The jigsaw pieces automatically rotate when you pick them up, so unless you somehow know ahead of time that a certain piece is upside-down or whatever, it’s pretty tough to figure out where it goes just by how it looks.

Overall, Reveries: Soul Collector is a decent game. It’s a little short, and the storyline segments look pretty even if they don’t make a lot of sense. I wonder if the inevitable third game will continue the dark, demon-killing theme or go back to the whimsical dreamland of the first game.