Hello all, and welcome to my new column, “A Crash Course to Game Collecting”! In this column, I’ll try to educate you in all my current knowledge, tips, and tricks for game collecting. I’ve been collecting for about two years now, and while my collection may pale to some, it’s certainly more than most. I have about 170 games as of today and still growing, and I’ll let you in on a little secret to grow your collection fast TODAY! That’s right—the PlayStation 2. And so without further ado…

Reason #1: THEY ARE DIRT CHEAP

As someone accustomed to looking at expensive Super Nintendo games (seriously, even the grannies at the charity stores are starting to figure out these things are worth money to people), I was beyond pleasantly relieved when I found out how cheap PS2 games can be. To give you an idea of how cheap they are, here is a stack of all my currently owned PS2 games. ALL except one (Metal Gear Solid 3: Snake Eater for $10) I bought for $8 or less; most for around $4 a piece. Most of them are in good or excellent condition, and about half of them have the booklets. I got all of these within the space of two months. They were found in thrift stores, flea markets, and independent used game stores, in a radius of about ten miles. That’s how many PlayStation 2 games are out there—and good titles, to boot. I only got one title online, for $8 including shipping, and it was new. In all of my game-hunting, no matter where I go, there’s at least an 80% chance there will at least be PS2 games. Do I have to say any more? Drop by your closest thrift shop and look now! 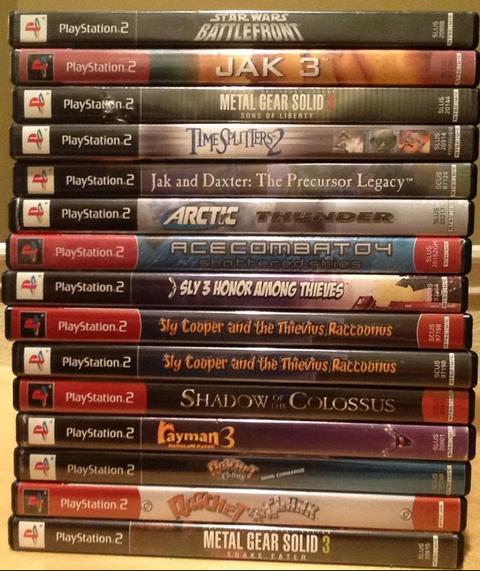 My current PlayStation 2 collection, all bought for $10 or under!

Movies based on Ratchet & Clank (April 2016), Sly Cooper (2016), and even Hitman (August 2015), are coming out soon, and likely so will be tie-in games/reboots, merchandise, and more. All the kids (and adults) who go to see the movies will want to play the originals, and will then go buy PS2s when they realize PS4 requires you to sign up for some subscription service or some other cockamamie thing to make the games you already own work . GameStop has once again started accepting PS2 systems for trade-in, making you wonder what they might have up their sleeves. They could be banking on the likely wave of nostalgia that will hit when those movies come out, and they realize that they can probably sell more PlayStation 2s than any current-gen systems because there’s like, what, five games that are worth playing this generation? I bought my PS2 at a flea market, with the cords and everything except a memory card, for $18. PS2s, most of the time without cords or controllers, sell at some thrift shops for $30 plus, and most independent game stores sell them for $40 to $60. That may seem alright for a system when you compare that to current-gen AAA games, but that really is a deal when you consider the PS2 has the largest game library ever. More than 3,800 games were released for the PS2 (and counting?), so what are you doing? Go through your closet, ask you cousin, go to a garage sale—but get your PS2 back!

At my favorite Goodwill, while there might not always be games, there is a pretty decent offering of hardware and accessories. I bought an original Xbox for $7 (more on that in the Xbox column down the line), and I see DualShock 2 controllers there about once or twice a month. They usually sell for the low, low price of $3 to $5. You find a PlayStation 2 on the free or cheap, get yourself one of these, and you’re already looking pretty set. But, what ho? You can’t save you game? PS2 memory cards, depending on where you get them, should be under $10. And, that’s still authentic Sony brand. Although buying a new, in-box memory card may be a little more expensive, I bought a used one online for about $6, and then found one at a comics and games store for $5—so they are a little trickier to find, but still no drag.

Other add-ons and accessories are still fairly easy to find and most are usually under $20. There’s the Multitap that goes for pretty cheap online if for some reason you have friends that want to play with you, and there’s even remotes that resemble a standard TV remote to more easily watch DVDs on your PS2 (trick: the remotes are easy to find, but never the receiver that plugs into the USB port on the system). And personally, now that I’m used to playing things in headphones late at night on my Wii U, I wished there was a headphone jack for the PS2. Sorta. There’s a headset that plugs into the USB port, and I got excited when I saw one of these at a thrift store, but they were asking $25. Do you know how many old games I could get for that? To wear some dirty old headphones of unknown past? Nice try, thrift store. There was also the EyeToy, a sort of motion control webcam thing that has quietly died and been swept under the rug in our blockout of all things motion control as of late. Although I have no idea why you would actually want to play a game with it, you might want to pick it up as a morbid curiosity. Point is, though, while a couple PS2 accessories are strangely moderate in price, buy the cheap stuff when you can—at some point soon, this stuff won’t show up nice and easy anymore. I remember going to the flea market and seeing Dreamcast controllers out my ears. Boy, I wish those times would come back. 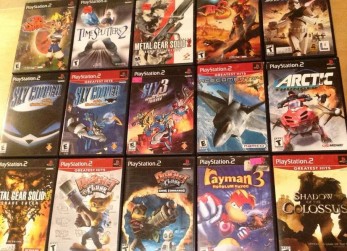 There were still PlayStation 2s being made until January 2013. As such, many PS2 games still kept being printed and sold, and it’s an utter joy to be able to go buy a sealed PS2 game. Okay, maybe that’s just me, because obviously I’m used to Nintendo cartridges, where no one kept the boxes. But when I found out I could buy Sly Cooper and the Thievius Raccoonus new? Untouched by dirty, dusty, GameStop-stickered hands? My heart sang, I’ll just say it. My heart sings even more when I think I can buy the Mega Man X Collection SEALED…

Alright, one at a time, now. A lot of the accessories can also be bought for cheap, new or nicely complete in box. And of course, one last tip that I’m sure we all know, but it bears repeating. When most games are first printed, usually a million are printed (at least in the case of popular consoles)—and once a game sells through that mark, in Sony’s case, they usually then print another run at a cheaper price, called the “Greatest Hits” edition. Nintendo’s equivalent is “Player’s Choice”. Since not all games sell well at first, early “black label” editions of games become more collectible later on if a game gets popular. One notable example is the previously mentioned Sly Cooper and the Thievius Raccoonus, which although it only sold 800,000 copies, was given a Greatest Hits edition anyway. Other forever noteworthy games like Shadow of the Colossus, Star Wars Battlefront, Jak & Daxter: The Precursor Legacy, Ratchet & Clank, and so on, will only go up in price in their black label editions. The good PS2 titles will only become more sought-after, and they should, but resellers will take advantage of kids who don’t know any better, and mark them up 50% or more, as surely some people will not realize that yes, while those games are great, THERE ARE MILLIONS AND MILLIONS OF COPIES. PlayStation 2 was probably the most successful console of all time, and as such, the systems and games are everywhere.

So, is it worth buying into the PlayStation 2? Look at my stack of games again. Isn’t that a worthwhile affair? I think almost any gamer would think so. While it won’t get too expensive even after the crowds start to roll in, don’t you want to save some dough now? And be the hipster at the Ratchet & Clank movie saying “Oh, I played all the games ages ago”? Or, just play some great games? Any way you spin it, the PlayStation 2 is a must-have.

A brief preview of the upcoming Okami DS game.