Puzzle games have never really been my thing, maybe with the exception of Tetris of course. I know it might be odd to say coming from me, but while the gameplay of puzzle games is usually incredible solid, there isn’t really much visual stimulation to keep me interested for very long. Flashing lights and an occasional musical jingle normally doesn’t do it for me. I was surprised at first when I discovered that Dragon Ball Z: Dokkan Battle was a puzzle game. But after spending some time with it and giving it a chance, I find myself completing missions whenever I have spare time. 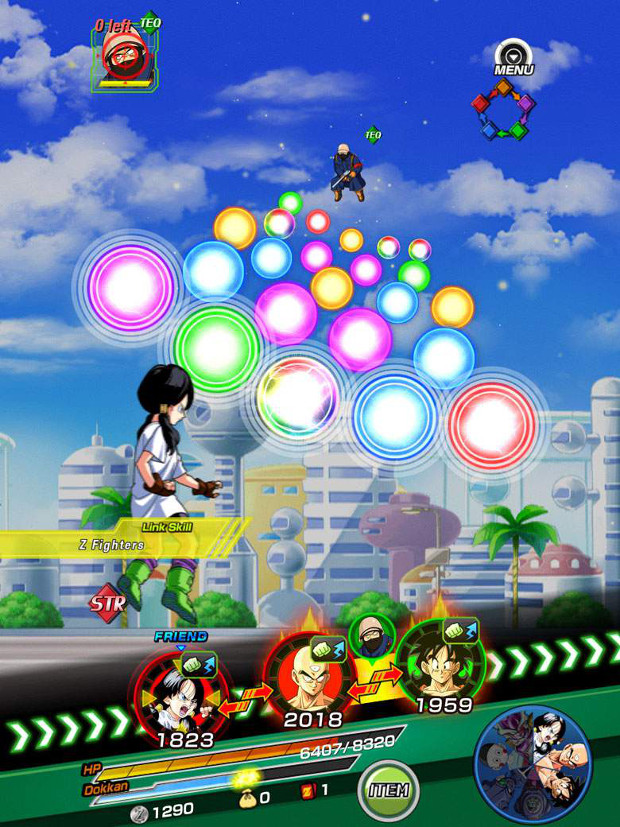 Gameplay in battles in Dokkan Battle is initially very simple. You have a character that is a certain color. For example, Videl here is red. You want to try to draw a path through as many connecting orbs of the same color as you can. If that fails, you simply want to get as many orbs as possible. This lets you do damage to your opponent. Get a Perfect row to charge up your character’s meter and you’ll get to see them do a flashy DBZ super attack for a huge amount of damage. It gets a little deeper than that as you advance further through the game. Characters will have chain abilities that can be triggered by placing them next to each other in those rows you see at the bottom. This can give them a substantial power boost. You’ll also need to mess with your turn order thanks to that circle up in the corner. That shows the strengths and weaknesses of each character. Orange beats purple, which beats green, and so on and so forth. If you fail to do so you will almost surely lose a lot of the fights that come around later in the game. Despite its initial simplistic nature, Dokkan Battle‘s system for strengths and weaknesses and flashy animations gives it an edge over a lot of other games within its genre. 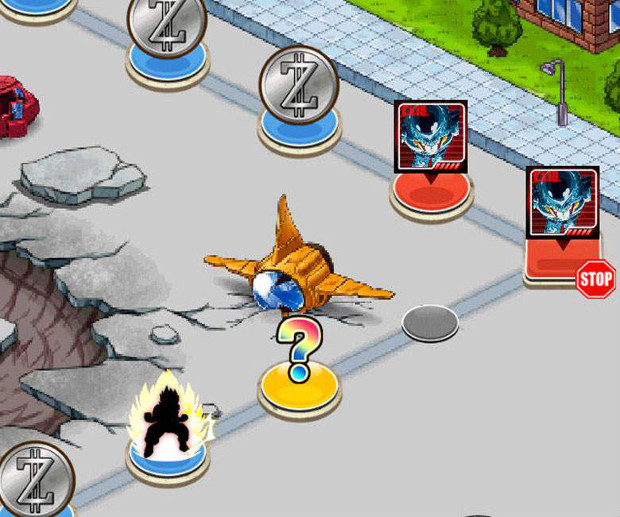 When you’re not busy punching Saibamen in the face, in Dokkan Battle you’ll be navigating around the board pictured above. You’re given three random numbers that represent how many spaces you can advance. Littered across the board are enemies to fight and items to pick up that you can use to train your characters or to buy items that help you in battle and that can boost your stats. Some enemies may be unavoidable and some areas of the board may be blocked off unless you replay the stage on a higher difficulty. Sometimes you’ll just get a bad draw and be forced to fight some enemies, or you may be able to breeze through the entire map. The worst the map system gets, though, is when you’re on a stage that drops an item in a very specific place and you constantly need to fish for the right number to acquire it. Missed the item? Too bad. Gotta replay the stage, and that’s only if you have enough Stamina. I honestly would have been fine if they did away with the map system in its entirety. It seems like more of a nuisance. That’s time that could be spent punching Saibamen. In the face. 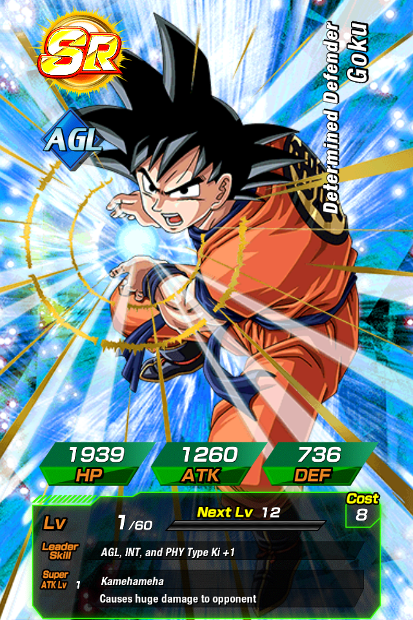 The character selection in Dokkan Battle is surprisingly good. You do get a lot of your series staple characters such as Goku, Piccolo, Gohan, and Vegeta—but thanks to the game’s weekly events, you will have a chance to fill your roster with a lineup of even more obscure characters from movies, spinoff games, and even classic Dragon Ball. Mercenary Tao? Got him. Bardock, the father of Goku? Sure, he’s there. Jackie Chun? Not a problem. King Vegeta? Just got him yesterday, too. You have a chance to fill your roster with a ton of these characters for your own customized team of six fighters. You’ll really be hurting for some of the better fighters early on and will want them. Characters of Rare rank or lower (with a few exceptions) are only really useful for feeding in to your stronger characters, hoping they’ll get to their max level to become real heavy hitters. But unless you’re really lucky, you’ll have to pay or grind for some of the better ones. It took about 25 tries running King Vegeta’s stage for me to acquire him which, thanks to the game’s Stamina System which only lets you play a certain number of stages in one sitting, took me about four days of playing on and off. Some of the higher rarity standard characters can even be difficult to get. You either need to save up enough Dragon Stones (the in-game currency) while playing to get one, or pay money to get enough stones to guarantee a drop. 50 Dragon Stones spent in one sitting will guarantee a Super Rare or higher. You can get 63 via the in-game store for $31.99. I’ll let you be the judge over whether or not it’s worth it.

Despite the paywall, Dragon Ball Z: Dokkan Battle ends up being a fairly enjoyable puzzle game overall. People who aren’t fans of Dragon Ball Z probably won’t find much to enjoy here, but anyone who’s a huge fan of Akira Toriyama’s long-running series will find a mildly entertaining puzzle game dripping with DBZ fanservice that will keep them coming back for more. I plan on sticking with this game for a while. It took me too long to get King Vegeta on my team to quit now!