Tropico 5 is a very different kind of city management sim. Whereas the likes of Civilzation and Stellaris would have you manage a massive empire, Tropico‘s scale is decidedly smaller. As a recently “elected” dictator, you are tasked with running a very small island nation similar to Cold War era Cuba. It is up to you to ensure that your citizens have happy lives, but most importantly it is up to you to remain in power for as long as you can. The path to becoming a notable world leader is fraught with challenges and peril which should present a thoroughly enjoyable and sometimes wild experience. Tropico 5 succeeds at this in some aspects—but only some.

Tropico 5 gives players a lengthy tutorial to get them acquainted with their island nation, running over all the basic buildings you can build and policies you can enact to help your island nation thrive. Most of the buildings are things you might expect. There’s plenty of residential buildings to keep your people off the streets. Taverns and cabaret theaters keep your fickle citizens from becoming bored. Police stations ensure that crime in your city stays low. Newspapers and TV stations afford your citizens some liberty to talk about how their government is treating them. Military buildings will be necessary to protect your citizens from invasion as well as preventing them from overthrowing you. Finally, there’s plenty of resource gathering buildings to earn money and factories to turn your raw resources into products to export for even more money. There’s plenty of hotels to allow your island nation to thrive as a tourist trap. Did it just seem like I threw a lot at you? It seems like your typical overwhelming amount of buildings for any strategy game, right? It might take you a while to get accustomed to all of these buildings, right? Well, no worries; thanks to the structure of Tropico 5‘s campaign, only a few buildings will ever really matter on any given map. 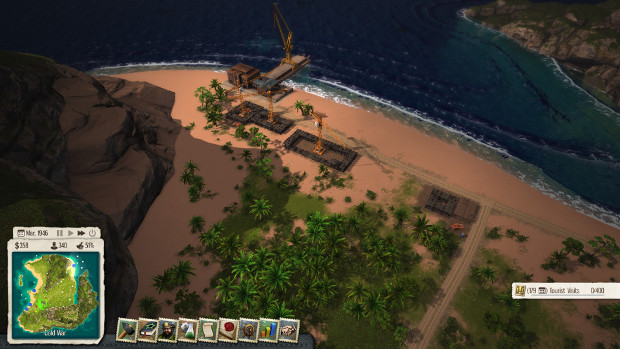 Tropico 5 has a staggered campaign structure that takes place starting during the Colonial Era and moving all the way up to modern times. It is through this structure that the game presents its tutorial. The main issue the campaign suffers from is its length. The tutorial you are presented with takes up about half of your total campaign. Each specific map teaches you about a different concept of the game. One map is entirely dedicated to keeping your approval rating high. One map is dedicated to creating a sustainable industry. One map is dedicated to teaching you about the tourism industry. The first half of the campaign makes it feel as though the game is really afraid to let go of your hand and let you figure things out on your own. But once the second half of the game starts up, the rails are off and you really have the freedom to develop your island…sort of. Objectives will always hinder your development, never allowing you to create the island you want. 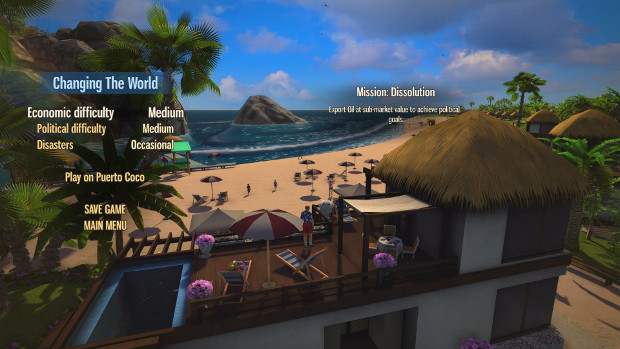 The campaign’s mission structure is even further hindered by its maps. The campaign toys around with a concept of presenting you with two islands to govern and allowing you to jump between each island. While it is interesting to retain previous upgrades and see how your island grows over a long period of time this also presents a problem. By fulfilling map objectives it’s possible to completely handicap yourself on certain missions. One such mission asked me to create a thriving tourism industry on my island. Unfortunately, I chose to attempt this the first time on an island where I had only built up my military, making it almost impossible to adequately develop my tourism industry in a timely fashion to beat the level. Luckily I had my second island available to me where I had completed a campaign objective to have multiple moneymaking industries on the island, so I was able to easily build a thriving tourist trap and complete the mission with no hassle.

Why did I say luckily? Well, initially players have two islands to choose from to start missions. But once a mission is completed on one island you are forced to do the next mission on the remaining island. Once the second mission is completed then both islands are available for you to choose once more. This poor design can create frustrating situations where a player is locked into doing a mission with a poorly equipped island for an objective, leading to a lot of frustrating retries. It can also create situations where missions are too easy when you inadvertently pick a perfectly designed island for a mission. Tropico 5 suffers with this difficulty problem. Missions are either too easy or too hard. 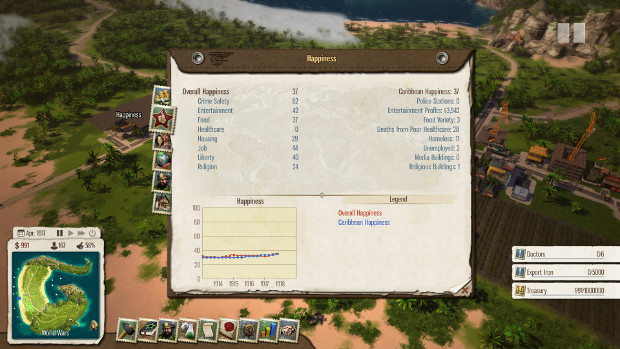 This erratic difficulty is further hindered by the fact that your citizens are incredibly fickle and require all of the specific buildings I mentioned earlier to keep them just happy enough so that they don’t overthrow you on top of everything else. There are ten different factions that present themselves throughout the game as citizens for you to please—and it is absolutely impossible to please all of them. While this is to be expected and seems like a great way to diversify your playthroughs while working to please specific factions, it never really comes together with the specific ways the game wants you to thrive. The most frustrating faction in Tropico 5 is the Environmentalists, who ask you to keep your island beautiful and dismantle any natural resource gathering industry on the island. You can dismantle pretty much everything, but it always seems like they will never be happy, which leads to a lot of players just plain ignoring them. A strong military can easily circumvent any coup attempt your citizens may make, so ultimately keeping your military happy absolutely overshadows everything else. As long as you can put down coups, you can completely focus on fulfilling your objectives unhindered as coups only provide a minor annoyance.

You also have the option to pass edicts and form a constitution, altering your governing style and adding passive bonuses to your island nation. The edicts and constitution are actually really enjoyable gameplay elements to toy around with, allowing you to give your island specific bonuses to help achieve your desired objectives. The constitution you can structure is really malleable and can fit your needs perfectly. Citizens don’t have enough liberty? Allow for freedom of the press and they’ll thank you for it. Need a few more votes to win the next election? Well, a police state will let every police officer convince one citizen to vote for you. Edicts also help as well. Whether it’s placating environmentalists by enacting mandatory recycling or hosting the Olympics to provide a huge boost to your tourism industry, these little things all go far in giving the player some measure of control over how to run their island. Unfortunately, with the strict objectives in the campaign, it never feels like enough. There’s also an option to create and customize heirs to your dynasty to provide bonuses as well. But all these characters ever amount to are small passive bonuses that ultimately don’t mean much.

The sound design for the game is probably the worst part. The music is never really all that enjoyable to begin with and quickly becomes nothing more than a background noise to ignore. No tracks ever seem to jump out at the player. There’s also a radio host that frequently comments on events happening within your game. Her responses are limited and happen so frequently that they quickly reach the point of annoying. This led to me playing the last fourth of the game with the sound off.

Tropico 5 also suffered from some technical issues and interface problems. The frame rate would drop really low for seemingly no reason, with stuttering becoming a frequent problem that was hard to ignore. The interface is also kind of clunky, forcing you to navigate through menus to really get anything done. You do have the option to select individual citizens, but the icons on the map are so small that it is almost impossible to click on any individual citizen in the throngs of people that can be present on your map. 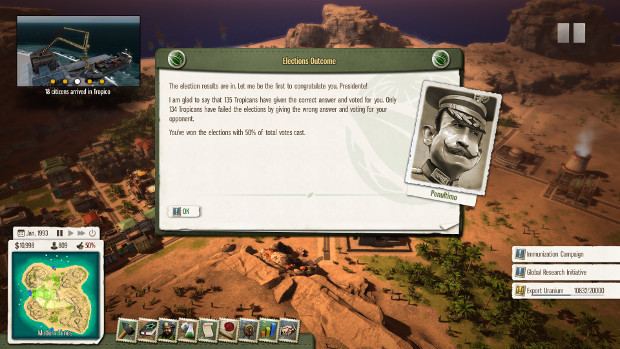 The game does have a multiplayer option where you can work with or against up to three other players on the same island. Unfortunately, islands are so small that you never feel like there’s enough space to build. Sharing resources, cash, and workers seems like a good idea in theory, but overall the multiplayer never reaches the same level of competitive or cooperative enjoyment that a title like Civilization would.

Overall Tropico 5 has a lot of good ideas and an interesting concept but is bogged down by simple poor execution. The campaign is underwhelming and never affords the player the full freedom another strategy game would. The interface is mediocre at best and it’s difficult to get anything done without diving into menus within menus. The sound design is an absolute annoyance. While the actual city management itself is ultimately an enjoyable experience, there’s quite a bit that needs to be tightened and polished before I’d consider coming back for Tropico 6.

"Inside the Guide" tells you about Michael's contributions to the NES Completion Project.