You’re driving up a mountain in your Volkswagen Beetle, heading towards your favorite ski resort. As you turn onto an icy bridge, you lose control of your car and ramp off of the broken section of the bridge, narrowly missing a helicopter as you fly through the air. Somehow you land on an icy ledge of the cliff face, and your bug is miraculously still in one piece. With nowhere to go but forward, you drive into a cave you landed in front of when SWEET LAHRUD JEEEBUS THERE’S A DANG-BLASTED FLYIN’ SAUCER!!! 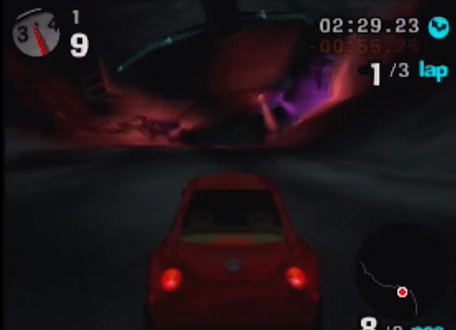 Beetle Adventure Racing was one of my all-time favorite games as a kid. While I lacked the hand-eye coordination for N64 classics like Super Mario 64 and Ocarina of Time, the simple controls of Beetle Adventure Racing made it easy for me to play and enjoy. (Of course, I only did two-player mode and never one of the Championship races, soooo…)

Like the name suggests, Beetle Adventure Racing (wow, this is getting to be a mouthful) is a game in which you race through various stages in/as a Volkswagen Beetle. You start with three cars which are practically identical, save for differing stats on speed, acceleration, and handling. After you beat the Novice Championship Mode, you unlock three more cars, which have decorations and better stats. Beating the Novice Mode also unlocks the Advanced Championship Mode, which you have to beat to get three even better cars. While the best car in the game is the maxed out Police Beetle (complete with nifty siren), my personal favorite is the slightly less maxed out Alien Beetle. Unfortunately, I’ve never actually gotten this awesome car, because it’s a pain to unlock.

Even though replaying all the stages can get super annoying, they really aren’t that bad. In fact, they’re freakin’ awesome! There are SO MANY different routes you can take on the stages, and the environment/scenery changes throughout each course. For example, Inferno Isle takes you along the beach, into a jungle, through town, and into an active volcano! Other stages include an Egyptian temple, a hidden castle, a secret ski jump, and so much more! Beetle Adventure Racing really encourages you to explore the area in search of bonus boxes and shortcuts. And even if your “shortcut” is more of a “longcut” or even a “I-was-in-first-now-I’m-in-last-curse-this-dumb-game-and-all-of-its-descendants-cut”, the areas are still fun to see and explore.

However, all good things must come to an end, and even though the stages really make the game, they are just SOOO LONG! The stages can get boring even with the faster cars, and having to replay them over and over and over and over and over again to unlock everything doesn’t help. It wouldn’t be so bad if there were some super-catchy, awesome tunes, but alas…the music is disappointing. From the beginning, it doesn’t sound so bad—the funky drums and bass get you psyched up for an awesome beat, but it just never comes. It’s like the beginning of a sweet jam session, but you never get the jam. I mean, the music does vary from stage to stage, but it just doesn’t have the same energy or overall goodness that defines the Mario Kart soundtrack.

And while we’re on the topic of Mario Kart, here’s another thing Beetle Adventure Racing is missing: good controls. Little turns are fine, but if you try to make a big turn, man oh man, it’s like you’re driving on ice. More often than not, I would turn by not turning, crashing into the side of something, and letting the recoil point me in the new direction. Which works great…unless of course you hit something at the wrong speed/angle. Then you throw physics to the wind and go flying across the stage. Or start driving up a cliff face…or driving sideways across a cliff face… 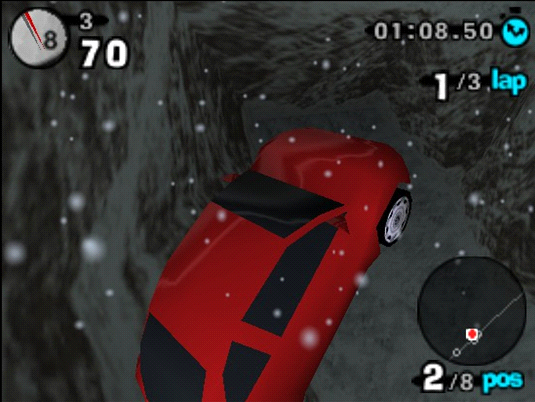 A+ driving right there…

I always found this hilarious, honestly, and it was one of the reasons I loved this game as a kid. Except, when you’re trying to win the race—then it’s not as funny. Unless, of course, you accidentally find a shortcut doing this, because I swear, they are literally everywhere. But then again, you’re still off the main track (and the map), and this game is very fond of making you jump back to the main course, and these cars are realistic enough that they don’t handle being airborne really well. (On a side note, they can take an unrealistic beating…except if they flip. Then you literally just fall apart.) Except, in the game, it’s less detailed, and more upside-down…

Overall, this game gives you everything it promises—Beetles, Adventure, and Racing. Even though the music is boring, the stages are long, the gameplay is repetitive, and the controls are somewhat unresponsive, there is just so much good packed into the game. The myriad alternative routes make the stages replayable, the poor controls can lead to some hilarious moments, and there’s even some fun multiplayer modes, such as two-player racing or the four-player “Beetle Battle” mode. While there isn’t much variety in cars, the whole idea of playing solely as Beetles is creative (even if it is one giant product placement), and after playing it, I really do want to go on adventures in an alien Bug. 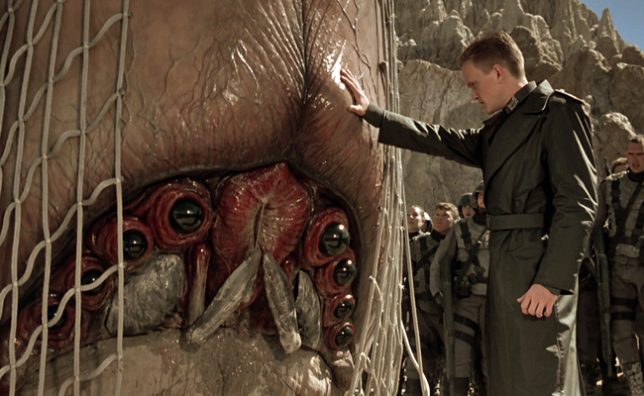 But not this type of alien bug…

It happened! We warned you that we'd be live-casting the 2011 Spike TV Videogame Awards, and it happened! We wrapped up just a few minutes ago. We'll be editing together a proper podcast shortly, but