You may have recently (if you are reading this article near its release date) caught wind that a new Ace Attorney game has been released. New criminal acts, intense legal battles, and everyone is all over it! Ace Attorney here, Ace Attorney there, Ace Attorney everywhere. We even have an Ace Fangirl here on GameCola.net: Gaming Outside the Mainstream.

But, wait. Why’s everyone freaking out about a bunch of lawyers? Aren’t legal disputes supposed to be boring?

Considering the GameCola staff have been talking about it since the early days of the THE GameCola podcast, it can’t be all THAT boring. Makes you wonder what’s so interesting about it, huh? But, what if you don’t have the time to take up a legal profession (digitally, of course, but still)? And that’s where I, Brancliff, try to explain all of this Ace Attorney craze.

WARNING: There may be some spoilers ahead! But, that’s kind of why you’re reading this summary instead of playing, isn’t it?

The very first entry to the series, Phoenix Wright: Ace Attorney, starts off the franchise in the hands of Phoenix Wright himself. Fresh out of law school, he works together with his mentor and wins a court battle to save one of his childhood friends from a murder charge. With a great start to his track record, Phoenix sets off to defend the innocent with his mentor, Mia Fey.

Who dies immediately after. 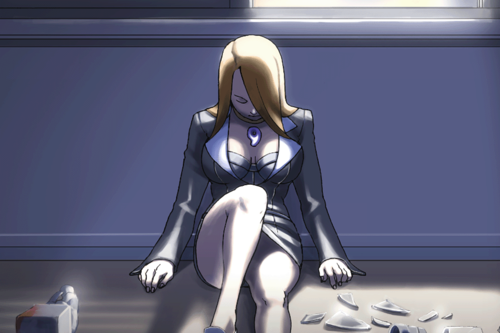 I know it doesn’t look like it…but trust me, she’s dead.

Without any sense of direction and guidance, Phoenix now has to make his mark in the legal world without any help. But he has no time to mourn over that, as he then meets Mia’s younger sister, Maya, in the very same room. As it turns out, Maya’s name is written near the body, in the victim’s blood. The police appear and Maya is blamed for the murder. Understanding that Maya is innocent (could you imagine if she wasn’t?), Phoenix decides to represent her in court.

Ace Attorney games have more than just a lot of arguing in court. After seeing how royally screwed the defendant can be in any given situation, your current lawyer (there are multiple, although it’s a long while before you meet any of them—and few of GameCola’s staff and fans like the other lawyers much) takes the case and is then set with the duty of investigating. Isn’t that what the detectives and police are for? Anyways, it’s on you to figure things out, and THEN argue about it in the courtroom.

Despite the setting of these games being (mostly) in the United States, the game’s mechanics are far from an accurate representation of the American legal system. Additionally, basically everything is rigged against the defense (I know I just said it wasn’t legally accurate, but bear with me). You will have to bluff and stall hard to make it anywhere—but not too much, because any of these cases, no matter the magnitude of the event or how important the verdict is, has to be settled within three days.

Most games in the series also have some kind of special mechanic. Each of the lawyers has a feature unique to them that can help them out in a pinch. Phoenix has the Magatama, a unique…err, I’m not really sure what it is, but it sorta lets him force the truth out of people when outside the courtroom.

According to the AA wiki, the term is “charm”.

He can’t use it to force truths that would make the case too easy, so there are unspoken stipulations for it. Another lawyer has the Mood Matrix—a device that allows her to sense the moods of a witness as they were during the event. Long-running “rival” (depending on you look at it) of Phoenix, Miles Edgeworth, gets the power of Logic. 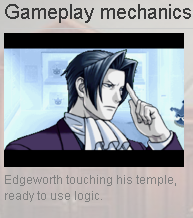 What, you thought I was joking?

Still, unlikely extra powers aren’t limited to lawyers. The Feys are a clan of spirit mediums, allowing them to channel the body of the others, and sorta become them for a short while. 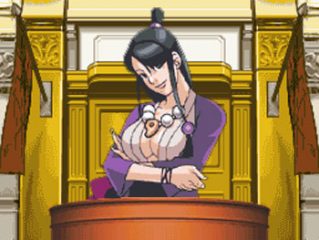 But your clothes stay the same. This can be a good thing or a bad thing. I think it depends on the kind of person you are.

No matter how you look at it, this is a bunch of games that are VERY different from your average legal drama. You HAVE to investigate things yourself, you have a system heavily rigged against you, you have Magic Lawyer Powers™, and your assistant has Magic Lawyer’s Assistant Powers™.

Many people like legal dramas for the same reasons they may like any other kind of dramas. They’re, well, dramatic and can be very interesting if you are emotionally invested in them. But, watching a legal drama and playing a legal drama are very different. Now it’s on you to know what to say in the courtroom, or where to look at the scene of the crime. The many underage girls around you will give you advice, but its on you to say the absolute right thing (and there’s usually only one). Plus, playing things like this is very rewarding. Say the wrong thing, and you’ll be punished heavily; say the right thing, and you will get to continue on with the story.

Also, I’m not sure how actual TV legal dramas work, but the games have overarching stories. Once you’re done with one court case, you may not be done with the characters or conflicts presented in that segment. Throughout the games, each of them have one big plot point that they get across throughout multiple court cases. Not every case is important to said overarching story, but that’s OK. It can be nice to take a break sometimes.

If you’re reading this article, chances are you want to understand why everyone loves all these Magic Lawyers™ and you don’t have the time to commit to becoming one yourself. And, that’s OK! These are games that are very long and very hard (heh, heh). It’s understandable, and the franchise has gone on for so long that there’s a lot of depth to the fanbase—too much to explain in just one article. But, now that you’ve read it, you at least understand what the games are about, yeah? If someone asked you what Ace Attorney is about, you could have said “it’s a game series about lawyers”, but you now you’ve got much more than that to go off of.

Are we heading towards a videogame dystopian future?