Hello, everyone. I’ve been in hiatus mode for a while because there has been a lot going on on my life the last couple of years, but in the meantime I still find enough time to enjoy and to stay in touch with everything going on related to videogames. One of the latest new items that shocked the ground of videogames was the reveal that Tracer—possibly the most recognizable character from popular multiplayer title Overwatch—turned out to be a lesbian.

And while the news was both well received or cheered by what seems like a big chunk of the gaming community, as always, you could easily find the usual crowd voicing their utter disdain over this reveal (some of it disguised as fake-indifference), probably because they possibly liked or even enjoyed playing a character that (Gasp!) turned out to be gay!

This all reminded me of a thing I wanted to write about some time ago. It all started when I saw this tweet on my feed, which asked the reader to go play this game—Coming Out Simulator 2014—RIGHT NOW. Having some time on my hands I decided to give it a try; this is what I learnt from the experience.

First of all, let me remind you: English is not my first language, and while I’m able to understand most things I need to get along, there might be some idioms and stuff I’m still catching up on. In this case, the phrase “coming out” didn’t mean anything to me without the “out of the closet” that usually comes after it; in short, I was totally ignorant about the game I was about to play.

Anyway, Coming Out Simulator 2014 is a short, free game from indie developer Nicky Case, where you play the experience of coming out, based on the developer’s own personal experience.

And while you might imagine what was about to happen on this game, I wasn’t. As I progressed through the story, I kept trying to figure out what the visuals and the dialog were implying, given that the art is rather simplistic (but well done) and that I was in some state of denial, it took me quite a while to understand that…I was indeed playing a gay character, on a quest of personal discovery in regards of his own sexuality. 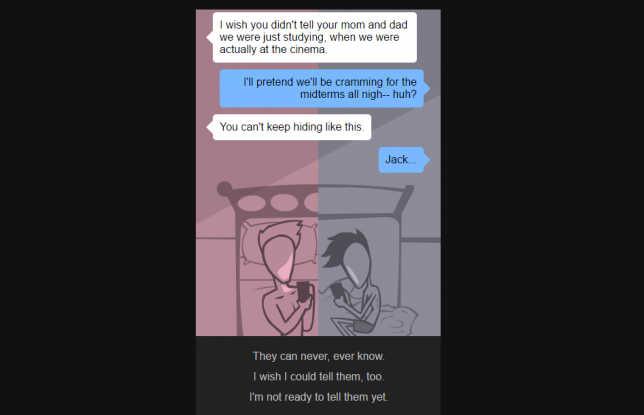 This was unexpected. I had played space marines, high-jumping plumbers and whip-wielding vampire hunters, but this…? This was new. I have to admit that I wondered for a second if I should keep playing this game, but the dialogs were clever, and I was enjoying the story, so I simply pressed on.

I won’t share much of the details because I’d rather you go and play the game yourself, but for me, one of the lessons I learnt was this: You have to be a man to be gay…I mean, anyone can equip a power armor and shoot aliens on the face, but being gay and just trying to enjoy a simple life all of us straight guys take for granted? That’s tough; more so considering that society—even your own family—will have their ways of making your life miserable.

I’d recommend this game based on the writing alone, but of course the main reason I’d encourage you to give it a try if you have like 20 minutes available is to experience how it feels to step into the shoes of a gay person and learn a little perspective, as well as to witness another great example of how videogames can be an effective vehicle for delivering such an important message. 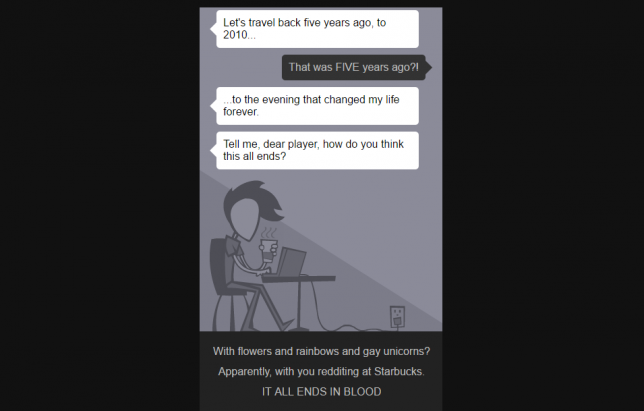 The second lesson I learnt from this is that indeed, we need to be able to play a more diverse set of characters, so we can learn how it feels not to be the strong-white-male character we’re so awfully used to playing.

Finally, the whole Tracer’s reveal (keep in mind…it has been hinted that this is only the first character revealed as such) reminded me of something I learnt through this game and something we should be able to apply to our interaction with society.

You don’t get to decide whether you like someone or not based on that person’s orientation or preferences, and you’re not supposed to expect to be warned beforehand that a character is gay or not, so you can avoid that character because you don’t like “playing gay”.

That’s the whole thing about coming out (fictional character or actual human being): You just don’t know if anyone close or important to you might be struggling with this dilemma, and the worst thing about it in the mind of this hypothetical person is not the act of coming out itself, but the possibility that you might reject them for who they actually are and what they stand for.

Which is kind of the case with Tracer. Here we have a spunky, likeable character that people just fell in love with ever since Overwatch was announced, and while the reactions varied in many ways, the people who openly rejected Blizzard’s decision to (as they put it) “shove politics down their throats”, or denied that this—while a small step—is a big win for a demographic that lacks proper representation on videogames, is only proof that we indeed need a more diverse cast of characters, and even more, we need to play gay a little more often.

I'VE BEEN WAITING A REALLY LONG TIME FOR YOU TO GET HERE...