This is an article I’ve been writing for over two years now. Every once in a while, something triggers a feeling in me—if you’re a regular podcast listener, you should be familiar with this subject. From time to time, I feel the sudden urge to play Ragnarok Online.

Ragnarok and I go way back. In fact, my history with the game is longer now than my history without. I remember when a friend from high school asked me for help getting into the alpha of the game, which was only available in Korean at the time and required the Korean equivalent of a social security number to get an account.

My time with the leopard-print Archers and giant Baphomets was relatively short, however. Most of my memories playing the game revolved around my Thief, trying to get a Kitty Band in case they ever fixed the Bunny Band quest, dodging bots and generally just wasting time trying to level up in a game that honestly had no point. 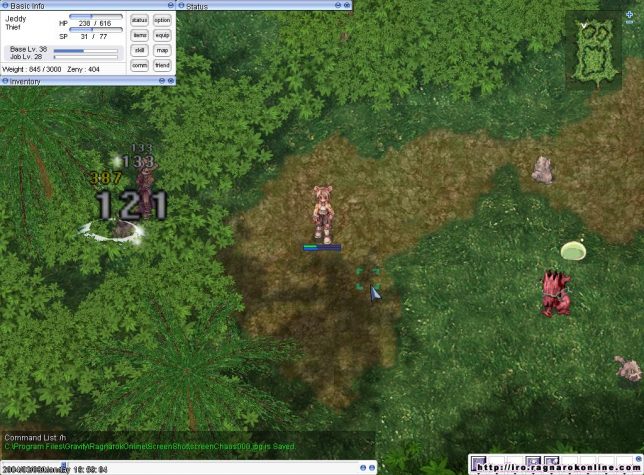 It’s odd to think that this is the time I focus on with Ragnarok, because it’s objectively the worst, least-functional version of the game, and also not the longest time period spent with the game in any sense. It was a brief period at the end of my high school career, and it was just one step in the game’s development as they added more classes, more maps, more monsters, and generally improved the gameplay (before proceeding to ruin it by overstretching the concept to keep people playing, but that’s for another article).

Is this the same feeling some people have when they look at sports trophies they got during high school some decades earlier? I could never agree with people who say that high school is the best time of your life, but maybe if I was more involved with school events and school sports, I’d look at old trophies and uniforms the way I look at old screenshots of games I spent time with during that part of my life. 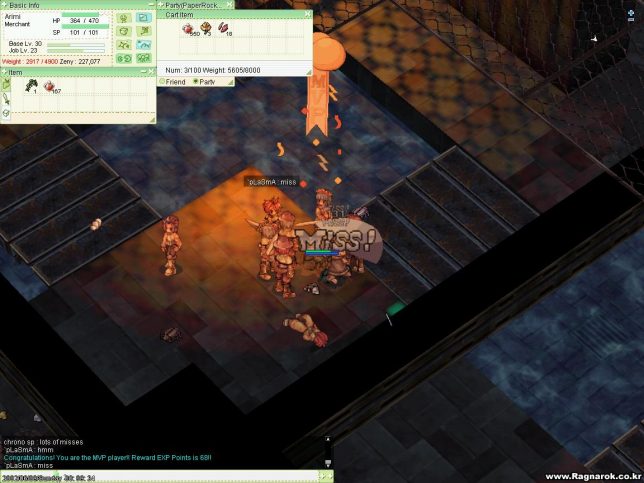 There’s something unique about returning Ragnarok, however. I used to feel the same way about other games I played in high school, or sometimes even earlier in my childhood. You’ve likely read my writings on those games, but you’ll quickly note that I don’t come back to them as consistently as I do Ragnarok. I gave up caring about Xenogears after I came back and beat it; the fond memories remain, but the desire to play faded. My affair with The 7th Saga has more to do with the game itself, but even that came to a decent conclusion with my most recent playthrough.

Yet Ragnarok remains. No matter how many times I return to the game, even if I can come to the realization that the game is awful and I should be more productive with my time, I can never call myself truly satisfied. I leave the still wanting more—or maybe not more, but something that I didn’t get when I came back.

Some people may say that it’s the design of the game. Most MMORPGs are built on the concept of drawing you in and keeping you playing so you’ll continue spending money, whether on accounts or on microtransactions. That might be true in some ways of the later developments that came to Ragnarok Online, but the early game had very little in the way of “addicting gameplay” or anything else that later, more formulaic MMOs would include.

The thing that keeps me coming back to this one is that it’s not the game it used to be. When I feel the urge to play again, it’s always for that era before second classes, before the new maps, and before any sort of “real gameplay” like quests or plotlines. I just want to mindlessly level up by killing roaches and mushroom things. Maybe equip a hat or two. I’m not interested in the War of Emperium, or transcendent classes, or bosses that take a team of ten or more max-level characters. 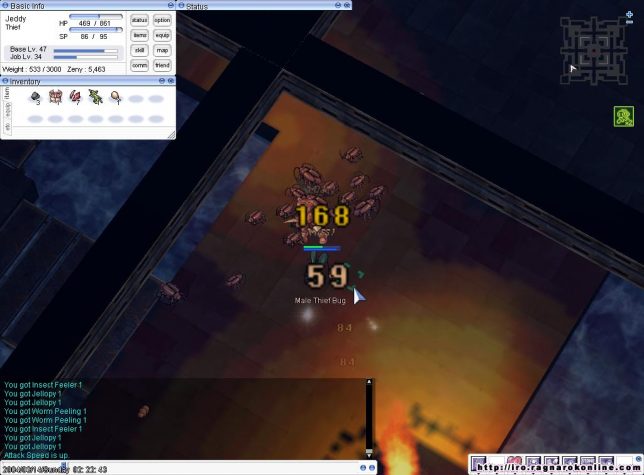 Really, it’s a very different game. Most of the original maps haven’t changed since the beta—most; I’m looking at you, Payon—but the monsters that spawn and the stats of the monsters have changed. You also used to spend a day or more as a Novice, taking your time in the beginning areas before slowly moving outward from your starting city. There’s no real reason to stay in the areas anymore, unless there’s a quest that has you grinding that specific map. With an economy that’s been around for over ten years at this point, rare items have piled up and it’s pointless to buy anything from an NPC shop anymore. And when I go to look for the equipment I remember being good, they’ve introduced dozens of new items that are even better now.

And, believe me, I’ve tried to recreate the old experience. The last time I went back to the game, I tried to recreate my favorite class type from the beta days: the punch Acolyte. The poorly built stat and skill layout of the beta made it possible for the game’s healer class to be basically invulnerable to undead. Combined with the odd decision to give them the fastest unequipped attack speed out of all the classes (before the implementation of stat-based attack speed), it was fun to build a character who could run into a dungeon and just punch zombies all day.

It was an unmitigated disaster. The current state of the game leaves it exceedingly difficult to play solo for any length of time, and it’s built around the expectation that you’ll be moving along directly to a max-level transcendent character. There isn’t anything fun to do unless you’re completely maxed out. Without all the stat boosts and super-powered skills, my sad little first-job character had trouble even in basic dungeons, even at level 99. The lucky thing for me is that even the official servers have a feature that lets you skip through levels by doing a few quests, so it only took me a couple days of casual play to cap out. I messed around for maybe a week with a couple different builds and then put the game down again.

That was a year ago. When I recently found myself in a part of town where I spent a lot of time during high school, the feelings started to creep back in again. I don’t think I’m going to go play the game…this time. Maybe the trigger wasn’t strong enough, or maybe I’ve finally realized that it’s never going to solve my problem, or maybe I’m just getting distant enough from those memories that it doesn’t matter as much anymore.

It’s true what they say—you really can’t go home again. Even if you try, it’s not the same home you knew.

In 2007, the great and wonderful folks at Valve made every single one of us dirty, dirty consumer pigs feel like we just blew up the ferris wheel at the Toys"R"Us in NYC and made off with five spectac