It’s a familiar story to anyone growing up with the internet: Your friend downloaded a cool game and they want you to play, so they send you the crack. But the game keeps patching, the crack is invalidated, so you need to update. Eventually the game consumes your life, and you leave your friend behind to devour this new game. It destroys friendships. It consumes your life. You even forgo necessary life functions to keep playing. This game is destroying you, tearing apart your social life, your mental health—but hey, this game is… 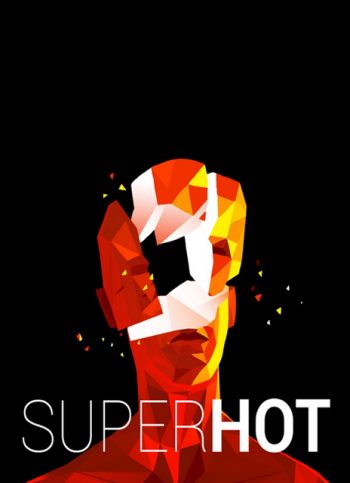 SUPERHOT is the MOST INNOVATIVE SHOOTER I HAVE PLAYED IN YEARS. Using the WASD to move and the mouse to aim and shoot, you take on endless faceless enemies using only the weapons they drop, your fists, and raw adrenaline. Like Hotline Miami, it’s more of a puzzle game than an action game, where the puzzle is killing everything that moves. Its graphics are an homage to ancient VR games that required headsets, gloves, and even rings to allow the player to control the game. There’s hardly any music save for the ending credits, and the sounds are mostly gunshots, static, and other sounds of violence. The story is bizarre, almost incomprehensible, and something you need to experience to make sense of. 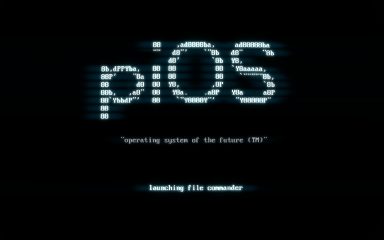 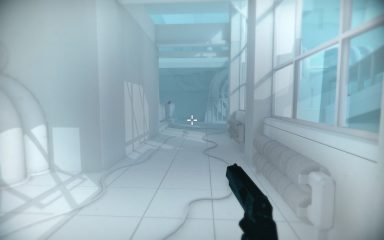 Looks are deceiving, and the dull minimalism works in the game’s favor.

SUPERHOT controls using the WASD and mouse mostly, and in theory requires lightning reflexes. In practice, the game moves incredibly slowly when you are not moving, even allowing you to dodge bullets if you move slow enough and with enough precision. Weapons are plentiful, but never long lasting, and if you want to survive you have to be flexible with your arsenal. As well, there’s a wide variety of interaction with the bullets and objects used by enemies, allowing many impressive trick shots. This is capitalized on by a replay system shared to the game’s social media website, Killstagram. All of these gameplay features combine to create a game that’s part twitch shooter and part social media, and overall THE MOST INNOVATIVE SHOOTER I HAVE PLAYED IN YEARS.

It looks simple, but SUPERHOT is anything but.

The visuals of SUPERHOT are rather simple, textureless 3D mannequins in textureless 3D environments. There’s only three colors. Enemies dissolve in a shatter of flashy panels, and identifiable objects are simple and without much flair. One could quickly dismiss the game, except that it hearkens back to the old VR videogames that only specialty arcades had stocked up. With its simple graphics, SUPERHOT pays homage to an obscure phenomena that is now seeing a resurgence with modern technology. Not exactly beautiful, but definitely stylish and unique, SUPERHOT‘s visuals help make it ONE OF THE MOST INNOVATIVE SHOOTERS I HAVE PLAYED IN YEARS. 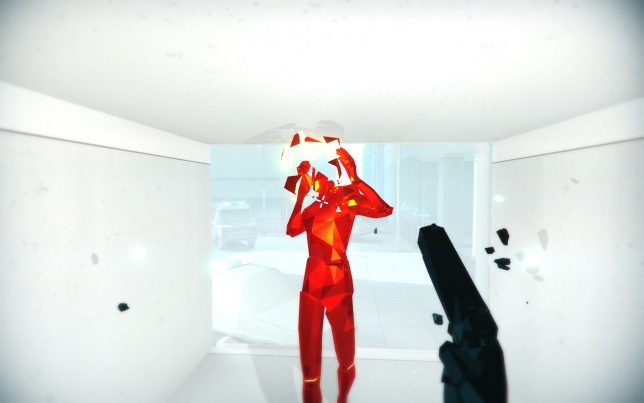 Nothing like the sound of gunshots and shattering glass.

There’s no music, there’s no voice acting, and in fact there’s little in the way of noise except for the sound of dying enemies, respawning enemies, and shots being fired. This is a feature of SUPERHOT, as similar games feature pulsing soundtracks and music to accompany your puzzles of destruction. Once more going the minimalist route, SUPERHOT creates a unique experience for itself. Without the distraction of superfluous music, dialog, and sound, you can really get to the meat of the experience, killing as many red dudes as possible. The audio minimalism is what helps make SUPERHOT ONE OF THE MOST INNOVATIVE SHOOTERS I’VE PLAYED IN YEARS. 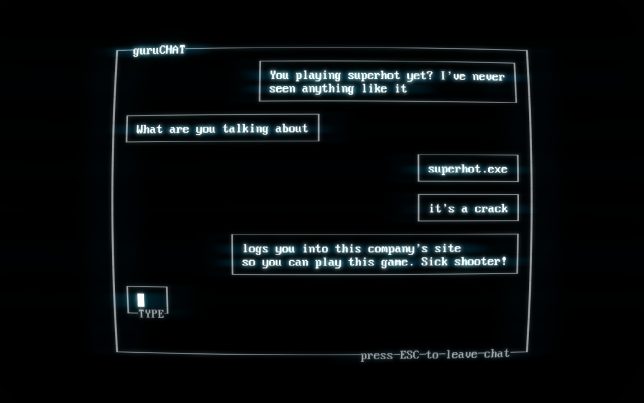 It starts off simple and familiar, but it quickly turns obtuse and almost indecipherable.

The story is obtuse. Without much reason or clarification, things happen and you’re along for the ride. It starts off like early software piracy did: your friend shares a game with you and you play it. As SUPERHOT goes on, the game gets patched, and soon it takes a toll on your health and relationships. Perhaps the story is merely a vehicle to allow one to kill red guys, though it could also be a statement on videogame addiction. Even at the end, not much is explained, telling you that the main game is an extended tutorial and the meat of it is in the “Endless” and “Challenge” modes. In the end this lack of a concrete conclusion, leaving it up to the player to make sense of, is part of why SUPERHOT IS ONE OF THE MOST INNOVATIVE SHOOTERS I’VE PLAYED IN YEARS.

Representation is a difficult issue to tackle when your story is trying to mess with the head of the player. It’s difficult to tackle when all characters are shimmery, red, skinless pixels. It’s difficult to tackle when characters are barely even characters. And honestly, why bother representing anyone at all? If we’re all vaguely-human shapes that are a shimmering red, and nobody talks or has any defining features, can anyone be angry? I guess not, and given the aesthetic of the game and the lack of characters, this is the best way to handle the situation. I suppose this method of handling representation—by making representing anyone to be virtually impossible—also is why SUPERHOT IS ONE OF THE MOST INNOVATIVE SHOOTERS I’VE PLAYED IN YEARS. 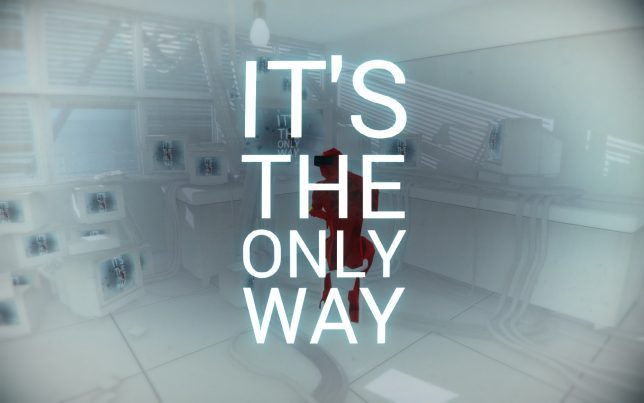 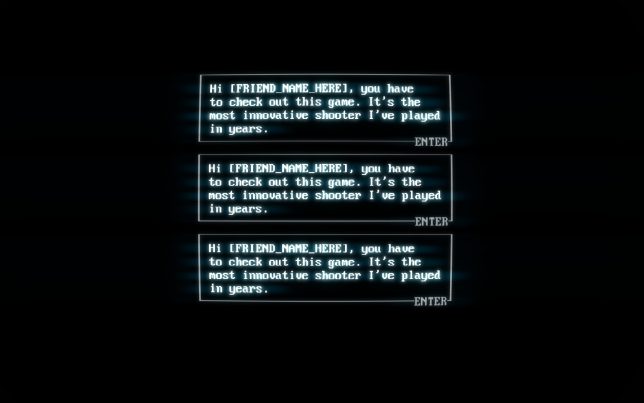 The game practically wrote this review, what can I say?

So, would I recommend purchasing SUPERHOT? Well, SUPERHOT IS ONE OF THE MOST INNOVATIVE SHOOTER I’VE PLAYED IN YEARS. If you’re looking for a new FPS or puzzle fix I’d say this might be worth a shot. It’s fun and intense, even if it’s too much of a good thing. Social media aspects, an endless mode, and a rather meta story all make SUPERHOT stand out, but if you’re not a shooter fanatic you probably wouldn’t enjoy the game. It is fun, and worth playing, because as I’ve said SUPERHOT IS ONE OF THE MOST INNOVATIVE SHOOTERS I’VE PLAYED IN YEARS. 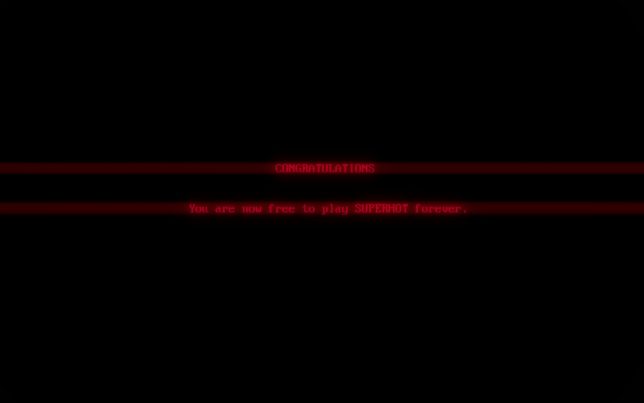 The deed is done—per your request.