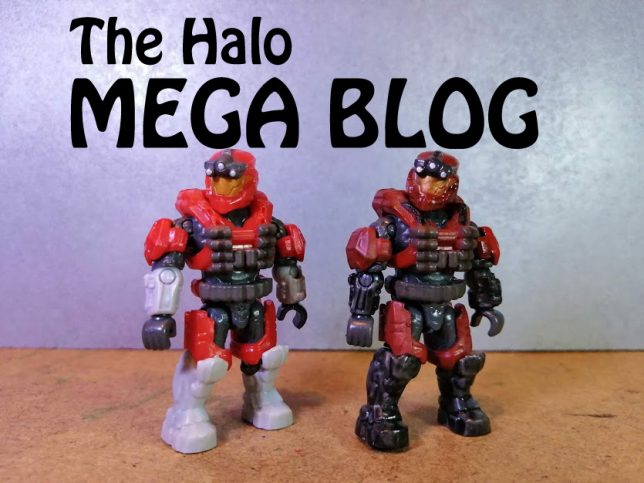 Hello, everyone. I’m back again. While I started this blog to talk about my Halo Mega Construx (aka, Mega Bloks) vehicle collection, this time around I’m going to talk about the mini figures that usually come on these sets—which I actually didn’t care about just a year ago—and how I ended up learning how to paint  them.

A long time ago—back when I was around 15 years old—before the existence of Halo, I used to build scale models, and yes, military vehicles were the only thing I built. I wish I had something to show you, but after moving so many times I have no idea if they’re around somewhere.

Anyway, as much as I enjoyed building them, I didn’t like to paint them that much; for me it was just a hassle that I needed to get done, so I didn’t spend much time doing it. For some reason, it was harder to find building models in local stores, so I eventually shrugged that hobby off, but I still had some of those paints with me…I must have felt confident enough that I could use them for something, specifically some silver paint that looked cool on a later model, so I decided to use it on my old Game Boy, and…oh, boy. 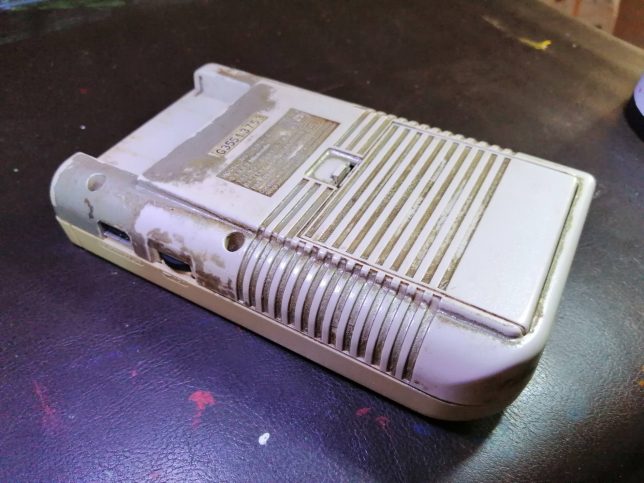 You can look at it yourself.

I wanted to paint just a little section, but a misstep made me paint a little more, and a little more, and…I just kept going until I painted the whole back cover, and no matter how much more I added, it just kept looking worse! I tried to remove it with my hands afterwards, but that didn’t work either.

As you can see, I kept this thing as-is, and it was an eternal reminder of how badly I could ruin something I cared about. My Game Boy was my only console for a long time, so it was a big deal for me—and I just never painted anything ever again.

I mean, I painted stuff like furniture and walls, and while I’ve been pretty confident about other artistic endeavors like hand drawing, making webcomics, or image editing, this was different. If I didn’t like a drawing, I could just start over, but a painted Game Boy or something else? Nope, never again…so I thought.

Fast forward to last year when I started getting serious about my Mega Construx collection, as I mentioned above, the figures that came with the sets are cool, but I didn’t care about them that much. But then they started getting better and I couldn’t ignore them anymore, so I started collecting again. 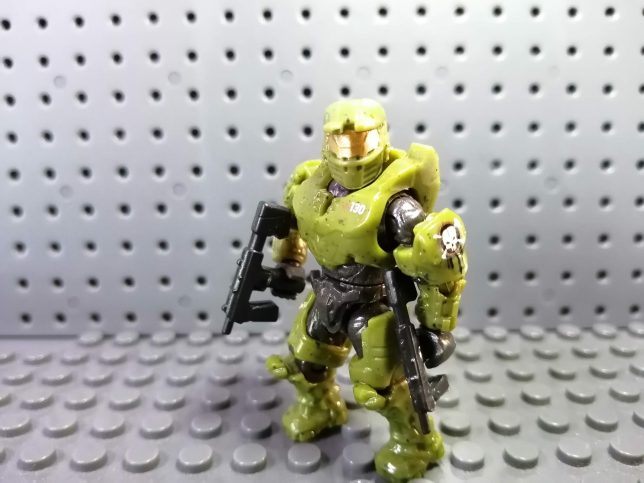 It’s Spartan Alice’s fault…once I got her, I knew I needed them all!

On the other hand, some of the figures came in colors that just weren’t good enough—for some reason, white and yellow seems to be the worst offenders. So I’d been playing with the idea of…you know, painting them. But that bad experience kept popping up any time I thought about the possibility…I suck at that.

At some point though, I realized this was different. Yes, ruining my old Game Boy forever was one thing, but these figures? I just didn’t like how they looked. What was the harm here? Would I make them look worse?

One day I stumbled on some acrylic paints and—after a brief research on my phone in order to learn if these would do the job—I took some blue paint and went home. What I realized that day is that…I was not only “not bad” at it, but I was also enjoying it…a lot! And once I started, I just couldn’t stop.

Now let me tell you what I like about this newfound hobby.

For one, it demands less time than other hobbies I have. I mean, I love videogames, and I love to do things to entertain myself in that small gap of time I may have between jobs, but many times I’ve tried to play a game “just a little while” to relax a bit, only to find myself vacuumed into said game for probably an hour or more!

But painting these figs demands a very mild distraction; it can range from 5 to 15 minutes tops, because it is imperative that you let them dry or you may not get good results. I actually enjoy doing this small touch, let it dry, and come back way later for another small touch, and maybe not touching it until the next day and just enjoying the whole process.

Secondly, it’s sooooo relaxing. Once again, remember videogames? Fantastic hobby, but sometimes not so much. Sometimes the controller has a low battery, the console or the game needs an update, one of its components refuses to cooperate (I’m looking at you, Nintendo Wii!), the Internet connection is not working correctly, or maybe just the game (or the players you encounter online) turns out to be a frustrating experience…you know, FUN!

I’m actually surprised that sometimes I need to relax after trying to relax with videogames!

Painting figures on the other hand: super relaxing. It’s just you, the figure, and probably some music or a show running in the background.

And third, that sense of accomplishment that comes with it! I’ve learned to extend every new project as much as possible; I may prime my figure on day 1, I might paint the figure’s visor on day 2, I could add one color the next day, and so on, and so on.

I do this in order to enjoy the process as much as possible, but it also helps motivate me to—as weird as it sounds—look forward to a new day. You know how difficult it is to motivate yourself into doing your duties everyday? Especially these days during the Covid-19 pandemic? It turns out that if I have one of these small projects pending, I’m more willing to get myself up, or to clear out my schedule so I can go back to that figure again.

I’ve tried doing them in a single day, but not only does that lead to me making mistakes I cannot easily fix, but also I end up burning up my enthusiasm to do anything else. Therefore, having something small to do every day, and seeing the daily progress on a new figure I’m working on is actually very encouraging to keep up!

There’s so much more I could say about this hobby, but I’m going to leave it at that for now. I also figured out that I can end this article with a gallery of the before-and-afters, as well of some of the details behind a few of the figures I’m most proud of.

I know I’m still far from being a pro, and I may not be “that” good, but I don’t mind. As long as I can make my figs to look good and have fun while doing it, then I can consider my main objective fulfilled.

Howdy gamefans, and welcome once again to Digital Championship Wrestling! As always I'm Paul Franzen alongside "Captain" Eric Regan, and this month, like so many months, we've got a first for you! Ain ...