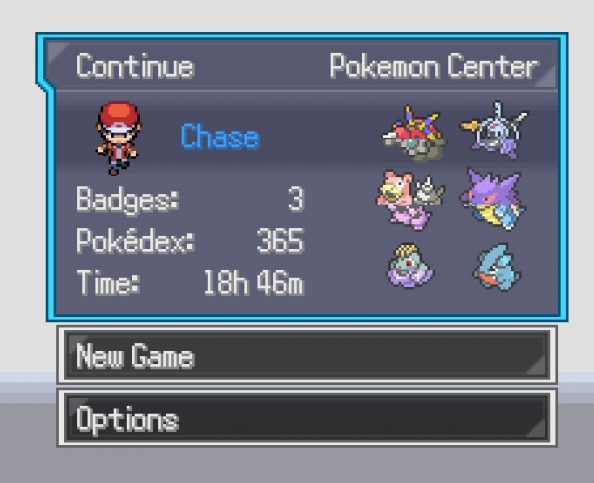 Today I realised I that I have a very unique opportunity. As I am typing this, I am on the precipice of taking it. I feel that it is a crucial part of the process to lay the groundwork for the horrors to come whilst I am in my current frame of mind; which is to say that I will no longer be as I am currently after I embark upon the approaching journey. I believe that anyone following me on this mini adventure of discovery will also be changed fundamentally, if not drastically.

The horror show began approximately half a year ago by my recollection. I had finally succeeded in convincing one of my best friends to accept my challenge of competing in a randomised Nuzlocke race of a Pokémon game, the goal being to beat the Elite Four and Champion before the other. For those unacquainted, Nuzlocke runs are playthroughs of Pokémon games with extra self-imposed rules in order to increase the difficulty and add in a loss condition, forcing one to restart completely or give up in the event that it is triggered. Additionally, a randomised run ensures a unique experience, enabling you to completely change which Pokémon you encounter in the wild and in trainer battles, as well as changing overworld items and the like. It is my belief that I managed to coax my friend into accepting this challenge by adding on yet another layer of chaos and mental anguish.

Pokémon Infinite Fusion is a Pokémon fangame that, to my knowledge, is largely based on Pokémon FireRed—but with additional features. Additions include exciting things such as a built-in randomiser, a quest system, and Pokémon added from Pokémon generations that came much later than FireRed. That being said, all these changes in the mind of a chaos-craving individual such as myself pale in comparison to what may be considered the main addition. Pokémon Infinite Fusion allows you to take any two Pokémon you have caught and ShmushTM them together to create your very own Argument Against The Existence Of A Benevolent GodAlso TM. Now you may think this has some sort of limitation such as not getting a new creature by fusing two of the same species, or only having one possible outcome from combining two separate species. You would, of course, be wrong in thinking either of these. Remember kids, the power of the human mind is both grand and despicable. 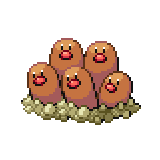 Me and my friend never got to finish this challenge due to various flavours of Life ReasonsJoke that has overstayed its welcome…TM, but we did get a decent chunk of the way into starting it. I do recall having a much tougher time than my friend due to a string of high roll damage and critical hits from enemies, as well as things like overpowered enemies with abilities like Shadow Tag. Shadow Tag keeps you from running or switching Pokémon, turning what would be an already stressful fight in a Nuzlocke into a true do-or-die moment for at least one member of your party. It has been months since I last opened this save file. I do not remember as much of the creatures I had on my side as I do the fact that most of them met a terrible fate that ultimately left me barely hanging on. With all of this said, let me finally invite you into this little time capsule of Gehenna, filled with demonic creatures literally of my own creation; a cold pit formed from my guilt over the absolute rejection of God Himself, just as Dante forewarned. 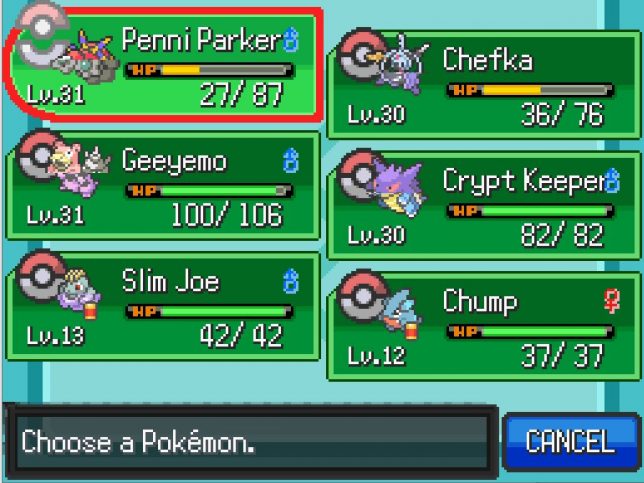 I watch my save file appear before me and I see that even back then I had the sense to create a divide between myself and “Chase”, the poor little boy I forced to suffer by proxy. I press the confirmation button. As I open this portal and open up my team page, I am surprised to see that I miraculously have a full team of six. My struggles are evident though, as two of my strongest Pokémon are below half health, and two others are twenty levels below the rest, clearly showcasing my desperate attempts to recover after another crippling bout in my war for survival. I also see that I will have to remember the rationale behind the nicknaming conventions of my teammates, which may prove a more or less herculean task. Since there is a lot to see and I don’t want to overwhelm you with an absurd amount of screenshots, I’ll try to only cover a handful of these cursed little products of a particularly morbid brand of sadism, courtesy of me. 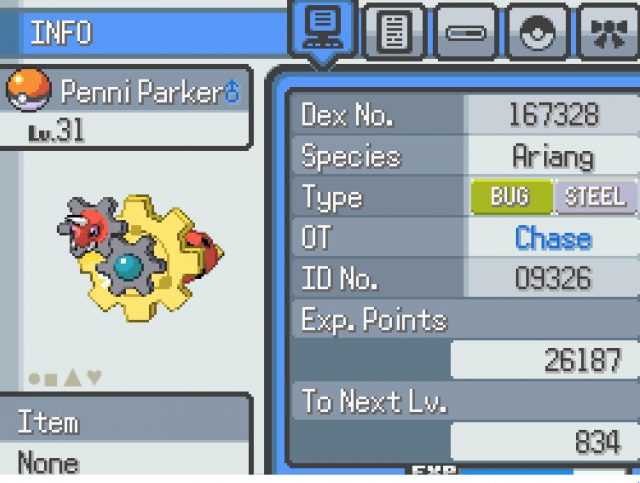 First up is one of my most reliable partners. I vaguely recall escaping some tough situations due to his high defense and steel typing. He’s a combination of Spinarak and Klink (not necessarily in that order, which goes for all of these, as the order in which you submit your Pokémon does matter to the wretched formula working behind the scenes to determine the exact unholy manifestation that comes out of the process) that I evolved a couple times. This nickname is probably the easiest to explain: Penni Parker is named such primarily because I am a huge comic book nerd and that name is similar to a Spider-Man adjacent character that (without getting into too much detail, as if I did I would never stop talking about comic books) fights crime with a Spider-Man robot. This beast is a spider fused with a machine. See? It’s vaguely clever. Though I sense that there is an extra layer to this name that eludes me currently as I was immediately stricken by the odd fact that the comic book character’s name only has a single “n”. Normally that would just be chalked up to a typo, but hiding extra meaning in a nickname based on a comic book character by adding a single extra letter is exactly the sort of cryptic nonsense that I’ve been doing my whole life, so take that as you will. 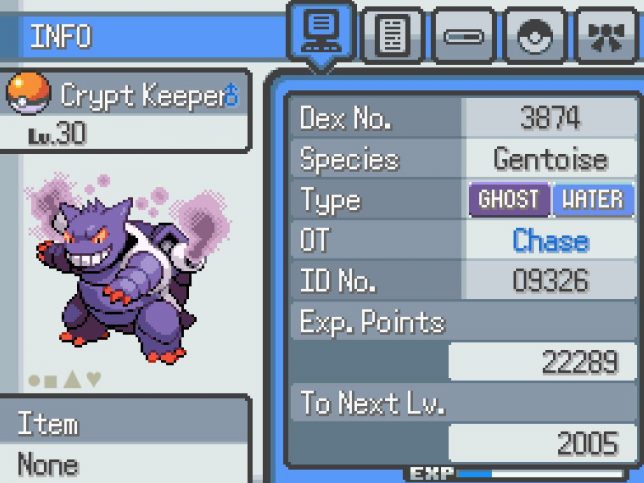 Next is one of my favourites due to their rocking design. Look at him. He’s a treasure and you cannot convince me otherwise. Crypt Keeper is a fusion of Blastoise and Gengar. Here is where my lacking memory really starts to make deciphering these nicknames more challenging. My best guess is that…it’s a play on him being dead (a ghost type) and I mentally made my own little joke about how he failed to get past the pendulum and into the pit…and all the water a Blastoise keeps wherever the water it shoots out of those cannons is kept is now soul juice or something? I honestly don’t know. What I DO know is that he’s rad beyond all belief. Thank you Crypt Keeper, for allowing me to be so lucky as to brutally violate nature and somehow end up with you on my team. 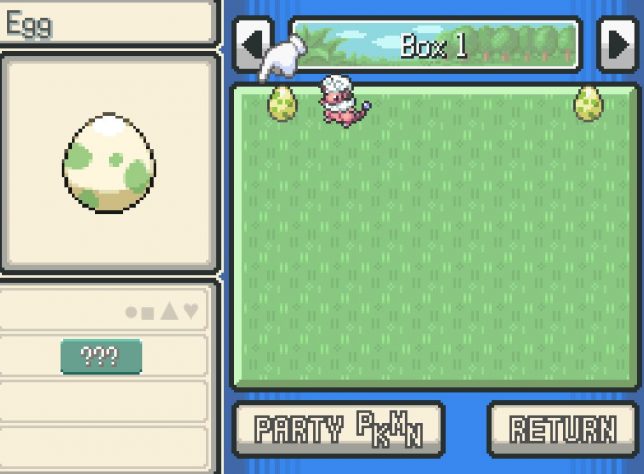 A look into my PC shows that, oh boy, I was definitely hanging by a thread. My box of usable Pokémon has three options…two of which are Egg (which by the look of that text box I can only assume is plural in the same way that Pikachu and Pokémon are). My box of Pokémon who have died in the line of duty on the other hand has plenty to look at. This includes my awesome and probably very powerful (had she not died) starter fusion of Magmar and Electabuzz, Keegan; the gross yet fascinating fusion of Primeape and Solosis, Germy Bradley; and a fusion of Mime Jr. and Fletchling that I evolved a couple of times and who also happens to be my personal least favourite of the crimes against nature for which I am responsible, Feix The Killer.

Seriously, I almost wish I never remembered this game so that I would not have had to rediscover Feix The Killer’s existence. I may actually be genuinely happy he died whatever (hopefully) excruciating death he did. For nicknames, I have nothing for Keegan, and all I know about the other two is that they are definitely some attempt to combine the four original nicknames into one for each set of Pokémon involved in the fusions. I suspect I was forced to shorten a name involving “Felix” due to character restrictions. Mr. Mime is a massive creep, so I bet that he was named something like “Killer Clown” before he was fused. The Solosis and Primeape may have just been “Germy” (because Solsosis is kind of a gross blob) and “Bradley” respectively.

This concludes our journey into the world of Pokémon Infinite Fusion. Hopefully you had some fun, were affected with a primal terror now currently settled in the very core of your being, or maybe even learnt something, but most of all I hope you didn’t find this particularly boring or anything like that. I apologise for the memory gap locking some secrets away forever, but that’s just the way the necessary damage to my psyche as a result of returning to this save file…crumbles…deteriorates…critical hits…I could not make that into a “the way the cookie crumbles”-style joke and I’m tired so I think that’s the strong note I’m going to leave off on. Goodbye, and sweet dreams. 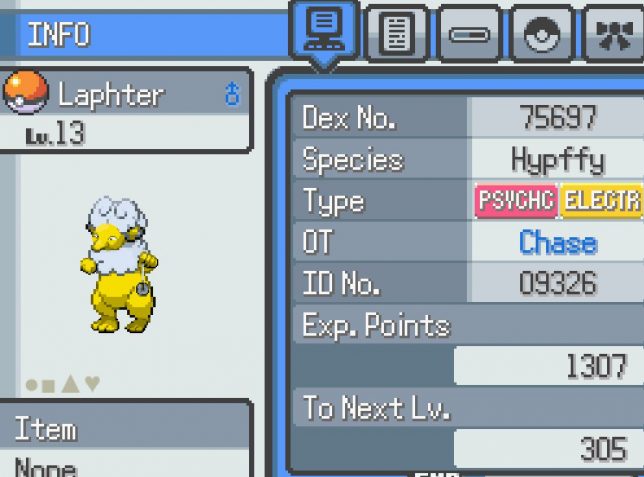 Should you buy this game? Don't search for reviews yourself—let us review the reviews for you!