There’s really no shortage of game development engines, but even so, there’s two that get the most attention from “serious” indie developers: Unity and GameMaker Studio 2 .

Unity is the main pick for 3D development, and it’s brought in better 2D tools in recent years, with a focus on high-quality, animation-style graphics. But if you want to make a retro pixel platformer, GameMaker Studio 2 is the obvious choice.

However, as I sit here saying it’s the obvious choice, it’s always been difficult to try out GMS2 to see if it really works for you. Unity has a completely free option that limits you in ways most hobbyists would never notice, but GMS2 always required a paid license to use more than a few sprites or scripts—and the limitations hit even harder after the big changes in the recent 2.3 release.

But just this morning I got an email: GameMaker Studio is changing its pricing model. You can now try the engine completely for free! You only have to pay if you want to publish. 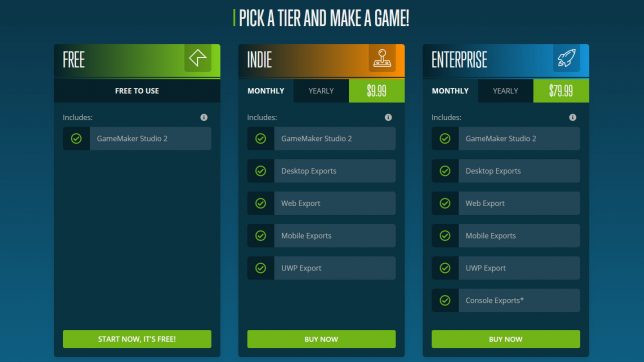 … Actually, this sounds better than it really is. They used to offer a base-level permanent license that allowed you to publish to desktop, and that license would go on sale regularly throughout the year. Now, if you want anyone else to play your game, you have to pay a monthly or annual fee.

Some people might be able to cheat the fee by developing a game for a few years using the free version, then paying for one $10 monthly subscription in order to publish it. But for all the developers who just want to have fun and participate in weekly game jams or share silly games with their friends, this means paying $100 a year for something they have little intention of making money back on.

I understand that Yoyo Games is a business, and that active development and maintenance of the game engine costs money, but Unity has survived for years by only charging those that really want the high-end options, who we can assume are making enough from their projects to cover the fees. Meanwhile, GMS2 is going to be charging a subscription fee for one of the most basic functions.

I wonder how this will work out for Yoyo Games. Existing perpetual licenses will continue to work “until the user chooses to upgrade” (I imagine we can expect to be seeing GMS3 coming out soon), but I have a feeling that hobbyists will be heading for free options like LÖVE and Godot, or any number of smaller or more niche game engines. Didn’t we already see how this went for subscription gaming models? Granted, now we live in the era of freemium and play-to-win, so I’m not excited to see how that translates into the worlds of game engines.

Or maybe GameMaker Studio 3 will be great, and I should be willing to support the developer if I want regular fixes and improvements. Maybe a stronger focus on more serious developers will be better for GMS, while the smaller developers would be better served by having more active communities in the free projects that they end up finding. I’m curious to look back on this article in five years and see how things ended up.

As long as it doesn’t wind up like Desura, I guess I’ll be happy.