If you are asking yourself right now “What does the Yu-Gi-Oh! The Movie soundtrack have to do with video games?” then you clearly have not read the title. And you’re an ass.

I feel I should address what is probably the concern of the majority of reader(s): Yu-Gi-Oh! sucks! Why should I listen to the soundtrack of something that is sucky? Well, the answer is quite simple: The soundtrack doesn‘t suck. In fact, you don’t even need to give a rats meow about Yu-Gi-Oh in order to appreciate the soundtrack. Just ask the GameCola head Dictator Paul Franzen. He has no love for anything Yu-Gi-Oh, but was instantly a fan of the soundtrack the second he heard the first track.

Of course, if you want to be known throughout the world as an ignorant racist because you wouldn’t give this amazing album a chance simply because of the picture on its cover, that’s fine by me. Bigot. 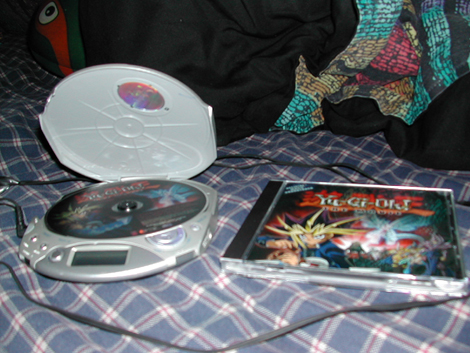 Back to the whole “Paul Franzen likes this and, therefore, so should you.” topic, here is a list of adjectives taken DIRECTLY from the Franzter himself that describe this musical masterwork quite nicely: spectacular, marvelous, kick-ass, super spiffy, rockin’, sweet, nifty, amazing, killer, fantastic, bodacious, tubular.

Did I mention it has the Black Eyed Peas on it? It does. You know them, right? They’re pretty famous… And “One Card Short” is probably the greatest song you’ll ever hear.

If you do like Yu-Gi-Oh! you might like to know that the soundtrack comes with a miniposter! A FREE one! It also comes with a FREE entry into this contest where you could get YOUR OWN VOICE in some upcoming Yu-Gi-Oh! episode!

There are plenty other reasons why you should purchase this amazing bit of musical history, but if you aren’t convinced by now that you should get it then I suppose the only thing that would work is me having you listen to it. Since I can’t very well do that in my current position, I’ll have to leave it to you. Do the right thing, buy the Yu-Gi-Oh! The Movie soundtrack.

Cheaters never prosper, but they do podcast!