With all this talk of next-gen game systems PS3, the 360, and the Revolution, it’s time to think about the basics. The originals, the firsts, the bests. Since this *is* an article about controllers, that’s what we’ll specifically be thinking about. 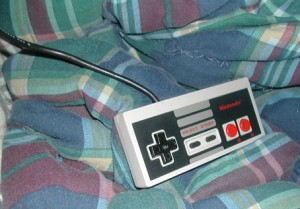 I personally think the NES controller would be the best original. Not too few buttons (Atari) nor too many (Sega Genesis), a “plain” shape without too many funkeh colors. The original NES controller, for those of you who don’t remember it, is a gray rectangle, and has buttons consisting of two red, round buttons on the right (A, and B), two tic-tac-looking black buttons recessed side-by-side in the center (Start, and Select), and then a 4-point directional pad to the left, also black.

While the controller is not necessarily extremely comfortable or ergonomic, it is a good size, not being bloated and too big (like the N64, and Dreamcast controllers) or extremely small and hard to use. You can wrap the controller’s cord around itself, take it, and go to a friends house. The controller’s connector is also not evenly shaped, such as the newer controllers are. I mean, yeah, the PSX controller only plugs into the console one way, but at a first glance, it’s easy to confuse WHICH way that is. The NES controller connector has a distinct shape making it easy to find where it belongs.

While it may not be the best controller for gameplay or somesuch, it does what it’s supposed to, and it does it well. It’s efficient, easy to use, not confusing, and features a classic controller design. We need to see more controller developed under these principals, rather than controllers like the bloated Xbox controller, the confusing Dreamcast controller, or annoying and obtusely shaped N64 Controller.

Fabricated News takes a look at the new Japanese Fire Emblem game, a remake of the first game in the series.