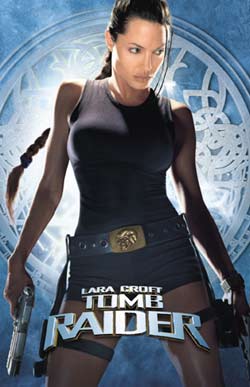 A few years ago, video game movies become popular again. Well actually, they didn’t become popular so much as they become the next fad for Hollywood to blow millions of bucks trying to cash in on with really shitty movies. Tomb Raider is one of those movies. To play Lara Croft, Paramount got Angelina Jolie, who was fresh from having what I assume was about a gallon of Calogen injected into her lips.

A sizable chunk of the movie is spent trying to establish that Lara Croft is super-cool. She’s always listening to techno music and cruising around in any number of stylish vehicles. Mostly, the movie attempts to portray Lara Croft as the queen of cool by limiting the amount of emotions that she shows. That, or it’s because Angelina Jolie isn’t a very good actress. I’m willing to believe that it’s a combination of the two.

Even in the arctic, the weather doesn’t get to her. She effortlessly stands around with her coat hanging open, revealing her tight, thin shirt, lest we forget about her breasts. It’s extremely rare for Lara Croft to not strike poses in this movie that do not bring extra attention to her bust line. Or at least, that’s where my attention was always focused.

On rare occasions, Croft takes some time away from not caring to show a little bit of sadness. This is whenever she thinks about her dead father. I don’t know about how this was in the video games, but in the movie, Lara Croft has quite an Elektra complex. The plot of the movie is based on a really stupid fucking premise. Basically, Lara Croft has to stop the Illuminati from gaining immortality from some crazy triangle deal. Yeah, that Illuminati. The tired conspiracy theory that claims a secret organization controls the world. They could have at least chosen a better conspiracy theory to incorporate, like David Icke‘s theory about Lizard people mating with mutants from Atlantis to rule the world.

Movie Quality: The movie sucks, pure and simple. But if you can look past the bad writing, and acting, and the fact that the movie is all-around stupid, the fight scenes look less real than WWE, and the dialogue is tired, then um… at least some of the scenes looked cool. Only a couple scenes, really.

Faithfulness to the Game: Anytime Angelina Jolie is in a new movie, every single nerd male wonders to himself if he’ll get to see her naked. The same can be said about Lara Croft. Every single installment of the Lara Croft series has rumored nudity codes. Both Jolie and Croft have a number of fake nude jpegs of themselves floating around the internet. So I’ll give them some points for having that in common. On the other hand, I remember that the games were fun. This movie is not.