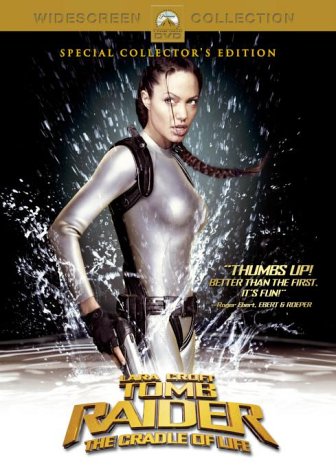 I had some difficulty with my review of the first Tomb Raider, mostly because the movie was boring and just plain lackluster. The second Tomb Raider flick is moreso. Frankly, I had trouble paying attention, so I may have gotten some of the plot of this movie wrong.

Lara Croft is back from her adventures in Narnia, and is now on a quest to uncover a magical baby’s cradle from Ancient Sumeria that will grant her the power to reclaim her youth, and rejuvenate her sagging career and breasts. Along the way, she must fight…um… we’ll say Santa Claus and Hitler. Actually, that’s probably not what happened, since that would make Tomb Raider 2 one of the greatest movies in the history of mankind, and the reality is that it was far from worth the ten minutes that I spent watching the parts of the movie that weren’t Angelina Jolie’s breasts.

At this point you may be saying to yourselves, “Didn’t Nicholas Cage just star in a movie with this same plot?” Well, I have not been bored enough to see National Treasure, but I’m going to assume that yes, Tomb Raider 2 has essentially the same plot. Either way, both movies are rip-offs of Indiana Jones, and as anyone who isn’t a Nazi sympathizer knows, Indiana Jones Kicks ass.

The action sequences were contrived and excessive. Don’t get me wrong—I love excessive violence as much as any red-blooded American—but when there’s no explanation for Lara Croft’s many needless risks that never pay off in anything that we haven’t seen before, you’re left asking yourself what the point was. It was so Lara Croft would look cool. She fails.

The primary difference among these archeology-as-adventure movies is that Indiana Jones is the only one that’s fun to watch. With Indiana Jones, you get a wise cracking badass, who doesn’t come off as an elitist snob. Lara Croft is like that popular girl from high school, who everyone secretly hates, but still uses because she’s really hot and her family is rich and they have this awesome pool, and her mom would buy us beer. Occasionally she gave hummers for coke.

Movie Quality: All of the fun of the games was replaced with an hour and half of Angelina Jolie’s overly-poutly lips desperately trying to show pseudo-cool indifference, while she spouted bad lines from a script that couldn’t have been written by anyone other than Corky from Life Goes On. She didn’t get naked in this movie either.

Faithfulness to the Game: The last Tomb Raider that I remember playing was Tomb Raider 2. And the only part of the game that I remember was this one part where you have to slide down this incline and time a jump just right to grab on to this other ledge to continue. That was a hard part, but it wasn’t in the movie. So I guess the movie gets a zero.

Jeddy tells a Christmas story—but not A Christmas Story.