Hey, everyone! Welcome to Inside the Guide, the article in which I talk about writing guides for videogames and whatnot. This month I’m going to talk about one of my earlier guides—the one I wrote for Ace Harding: Lost in Las Vegas, better known as Deja Vu 2.

Deja Vu 2 is a first-person puzzle-solving game, which was a pretty empty genre back in 1986 when the game was released. It starts with your character (Ace Harding) waking up naked and with a throbbing headache in a Las Vegas bathroom. Sure, that doesn’t sound so bad, but when you leave the bathroom, you find a cigar-smoking gangster! 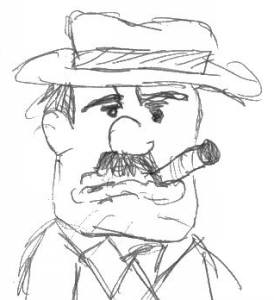 The plot of the game sounds simple when I put it that way, but let me assure you that it makes no sense whatsoever when you’re playing the actual game. The solutions to the in-game problems make almost no sense whatsoever; for example, at one point in the game you have to break into a prostitute’s room, take a vacuum cleaner out of her closet, open it and use a knife on the bag inside to find a letter. That’s the sort of game you need a guide for if you ever hope to beat it.The gangster, Stogie Malone, calmly explains things: The boss wants a lot of money from you, and he’s going to kill you if you don’t pay up. The way to beat the game is not to get the money, but to instead start a gang war so all the gangsters end up killing each other. Now that’s what I call creative problem solving!

The story behind the guide goes like this: About five years ago when I wrote the guide, there used to be list of most-requested game guides. One of the games on the list was Ace Harding: Lost in Las Vegas for the NES. That sounded like a cool game, so I decided to write a guide for it.

As it turns out, the whole thing was just a cruel joke. Ace Harding: Lost in Las Vegas was neverreleased on the NES. I didn’t know that, so I downloaded a freeware Windows version of the game and wrote a guide for it. I’d include a link to the freeware version, but I don’t know where it is. Sounds like a job for The Poor Player’s Paradise!

That’s about all I can think of to write this month. Make sure to tune in next month when I discuss a game that involves the Klu Klux Klan, the Statue of Liberty, and an evil alien bent on global domination! It’s fun with Boku Dracula Kun!

What kind of player are you?