You know him from his monthly reviews and Top of the Heap, and you know her from Games for the Casual Gamer. That’s right! This month in Versus Mode it’s: 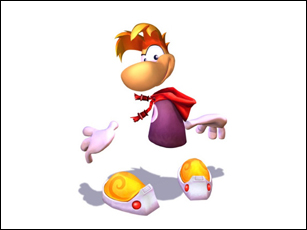 1. Hardcore gamers are the biggest divas around.

Regardless of what you may think, Getting Up did not flop because you chose the wrong day in January to release it, because the folks at Atari didn’t give you enough control over it or because the people over at EGM are a bunch of malicious nerd-jerks. Face it: The reason it failed is because videogames just aren’t what you do. You know how to put silhouettes of rhinos on shirts, mark up the price and call it fashion. I really don’t care how many videogames you play in your personal time. I doubt Sid Meier or Shigeru Miyamoto would consider themselves experts in the fashion industry just because they wear shirts. So, once you’re done bellyaching and blaming everybody else for your inadequacies in the videogame industry, I’d like to see one final project out of you:

Danielle Symonds-Yemm: Are you serious? I thought reality TV stars were! Well, you DO learn something new every day. In any case, I’ve no idea who that guy is, but from the looks of things, he’s mightily pissed. As for being a diva, I bet I could give him a run for his money. But seriously. If you make a game that nobody buys because it’s downright pants, just suck it up and move on. It’s called BUSINESS. The gaming industry works like any other, and let’s face it—not everyone is going to be pleased. It happens. Take the criticism, use it, and produce something better. Don’t just bitch about it. You’re just digging yourself deeper into that nasty little hole.

I think we all remember what happened to Veruca Salt, yes?

2. There is no way Super Columbine Massacre RPG should have been removed from the Slamdance Game Festival.

Christian: I’ll begin by saying that I have played this game, and it sucks. Not bad for a homebrew game made with the ASCII RPG Maker program, but certainly not a gem, nor does it give any powerful statements about the shootings, youth culture or anything at all, as many people seem to think. It’s an embarrassingly trite piece of garbage made by a kid who I can only assume is a high school freshman trying ever-so-hard to fit in with the other kids that listen to KMFDM, wear black trench coats and never smile. However, if the game was chosen to be in the Slamdance Game Festival based on its merits then it certainly should have been accepted. Anything less cheapens the entire festival.

Danielle: Cue my “WTF?” stare-at-screen that’s so dramatic I might just slap a copyright on it.

Super Columbine Massacre? What the…? I’ve just checked this out as I kinda miss things, being in the UK. But, um…is it just me, or is the whole concept just…well, wrong?

3. Flashy cutscenes do not add to a game’s value.

Christian: Cutscenes won’t save a bad game, but I’m certainly not above enjoying them if they’re done well and used in moderation. SquareEnix, who is notorious for the frequency with which they use cutscenes, utilizes them perfectly. You play the game, and, every now and again, you sit back and take in a beautifully rendered cinematic sequence that illustrates a key change in the storyline you have been working to advance for a few hours. Once it’s finished, you take control again and proceed. I always like a well-placed cutscene. It makes me feel like I accomplished something.

Danielle: OK, personally? I skip them. On a constant basis. Not because I don’t like them, but because they’re not really important unless you really don’t know what’s going on. However, I think they’re great additions to the game, specifically if said game is story-based. Providing that the graphics are excellent, and that the cutscenes aren’t appearing every couple of minutes so that you’re hitting the ESC key in frustration (“Damn you! I just wanna play the *bleep* game!”), they’re absolutely necessary and I see no problem with them. But adding to the game’s value? Hmm, I think not! They’re a good added extra, but only when needed. I think that just comes down to personal preference.

4. Videogames teach us to be conformists.

Christian: I may have seen the logic behind this argument 20 or so years ago, when games were primarily linear and had little to no room whatsoever for any creativity (eat the dots, shoot the invaders, etc). Today, however, we have games like Oblivion in which you can roam around a fantasy world, doing whatever you want, taking whatever missions you feel like (if any at all) and exploring everything down to the most subtle minutiae.

Games like America’s Army certainly do have the ability to influence and train people. This isn’t just because it’s a videogame, though—it’s because it’s a videogame made with the intent to recruit and train soldiers for the US Army. There’s no argument that games can’t be very effective tools in training many different professions. Not only soldiers, but EMTs, police officers and airplane pilots can all be trained very well in videogame simulations.

However, the most important difference between games meant to recruit, train or influence from other, mainstream, just-for-fun games is that these games are meant. to. recruit. Grand Theft Auto has never claimed to be an interactive how-to for a life of crime, nor has Activision ever claimed that the Tony Hawk games are a fast track to getting you in the X Games. Mistaking real-life training simulators with just-for-fun games like Halo would be akin to mistaking Carl Sagan’s non-fiction Pale Blue Dot with The Hitchhiker’s Guide to the Galaxy. It’s the kind of mistake only the most simple-minded of dullards would make.

And speaking of books, if the linear nature of videogames are causing rampant conformity among kids today, then people who grew up in the 70s and earlier must be a bunch of brain-dead zombies. Books, TV and films are all one-way forms of communication. No matter what you do, you’re not going to save Marion Crane from getting stabbed to death by Norman Bates or help Winston Smith fight Big Brother. These are completely linear mediums (without the assistance of modern technology), andnobody has ever lobbied to save kids from the dangers of reading.

Danielle: Of course they do. (Note the sarcasm). There’s always some silly claim made that’s apparently sociological or some such rubbish, and we’re all meant to go, “Well, bugger me! How true!” In this case, however, that WON’T be happening.

“Conformity” is taught much earlier than that. Games do not “teach” us to be conformists. Whereas a lot of games and their worlds and rules are usually based around our own, there’s nothing really to say we learn from the game. Unless we’re talking loyalty, however. That’s a different matter entirely.

I mean, if I’m playing Alliance on WoW, I NEVER kill a Forsaken. Ever. Because deep down? That’s my race. I should be wiping out all of ’em, but do I? No. So I guess this makes me a non-conformist?

We’ll never know. Not that it actually bothers me. I just kill trolls instead.

So I guess that makes me Azeroth’s biggest racist.

5. Couples and videogaming go together well.

Christian: This could go either way, as it depends on the couple. If you both dig gaming, then this would be a great opportunity for you to do something you both enjoy together. However, it could also adversely affect a couple if only one of you loves gaming and the other one couldn’t give half a shit that your elven battlemage just reached level 73, and you keep pushing her to play a bunch of nerd games that she just isn’t interested in. I’ve certainly met my share of dorks (I’m looking at you, World of Warcraft nerds) that would cancel dates with their girls if it meant getting some rare in-game dagger.

If, however, you have a girl (or guy) that happens to appreciate videogames, then playing together is a great way to share an activity you can both enjoy. Just find games you both like and play. I like RPGs, she doesn’t. She likes racing games, I don’t. Find a middle ground you can both enjoy. We both like party games, fighting games, MMOs and puzzle games, among others, so we find games within these categories and play.

Don’t forget, if she’s new to games go easy, don’t pop in Halo 2 and death-snipe her before she can even figure out what the controls do. Not only will this lessen the chances of her ever wanting to play with you again but also, despite what your fantasies might tell you, no girl is ever going to say “Oh man, you killed me in six seconds! You are teh Halo haxx0r! Do me, Master Chief!”

Danielle: I totally agree on this one. After all, its always nice to have a hobby you both enjoy, right? If you can manage to pin your partner down in front of a game for more than ten minutes and get him or her addicted, it’s a total relationship bonus and will beat any so-called “wife aggro” that’s doing the rounds owing to much addiction with regards to games like WoW.

Apparently, videogaming allows you to “bond and learn how to problem-solve as a team,” says a psychologist. Psychologist? Pfft.  But, psychology aside, gaming really is, in my opinion, a fun thing to share.

Just think of all the in-jokes you can share and make people feel awkward with at dinner parties!

I plan on corrupting as many people as possible in the future.