Ubisoft recently announced that they’ll be making a brand-new Teenage Mutant Ninja Turtles side-scrolling beat ’em up for the DS. Right now, you’re probably thinking that this is the Best News You’ve Ever Heard In Your Entire Life—no one’s made a new one of these since Turtles in Time, and oh boy, this is going to be so awesome.

Let me tell you why you should lose your happiness. 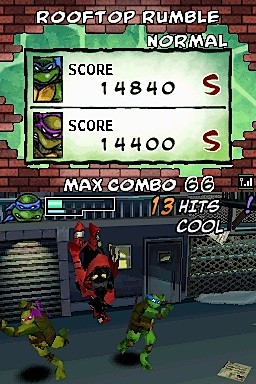 This totally isn’t the first new Turtles side-scroller in a while. Konami made a series of them in the early 00s; you just didn’t notice because they didn’t get much publicity, because, while they aren’t bad enough to warrant hilarious reviews about how awful they are, they also aren’t nearly interesting enough to deserve any kind of write-up at all. They’re for the GBA, they’re based on the newer cartoon, and they’re all horribly boring. (Konami also made a series of 3D Turtles beat-’em-ups for PS2-era consoles, one of which won GameCola’s “Most Dissappointing” award in our year-end awards.)

If Konami—the company that made the original games—wasn’t able to make good Turtles games then, why should Ubisoft be able to do it now? After all, this is the same company that actually managed to ruin Turtles in Time, in the form of a God-awful XBLA remake-—why should I think they can do something good with this license? Especially since, holy crap, did you look at that screenshot? Does that look like a good game? Does it look at all like the original Turtles games? Is there any way you’d even consider playing that, if it wasn’t aTurtles game?

I hate to ruin your happiness, but there’s no reason to think that Ubisoft has any idea what made the original Turtles games good. It’s more likely that they think they’ve waited long enough after the previous batch of crappy games to make a new batch of crappy games. Ubisoft’s just going to keep churning out crappyTurtles games, which the public will buy, because the public will be so excited about a new Turtles game, and they won’t know or remember what’s become of the franchise. It’s kind of the exact same thing that’s happened to Sonic.