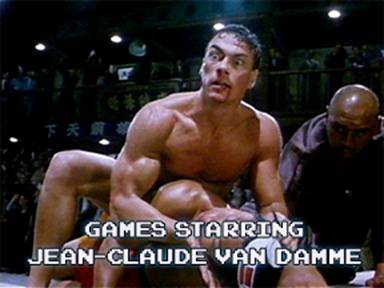 For the past five months I’ve been trying very hard to hide the fact that I’m just a poor man’s Seanbaby. This month I’ve officially given up, because this month’s heap is all about games starring The Muscles from Brussels, Jean-Claude Van Damme. 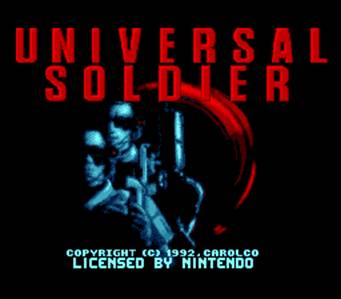 We all know how awesome Contra is. You run around, collect powerups and blast aliens to hell with a spread gun until you inevitably die four seconds after getting it.  Now, how much more awesome would Contra be if you totally ripped it off and added Jean-Claude Van Damme?

Oh, let’s cut the charade—you know where this is going. Universal Soldier a bad rip-off, and the addition of Van Damme helped nothing. I feel dirty for even mentioning Contra in reference to this garbage. 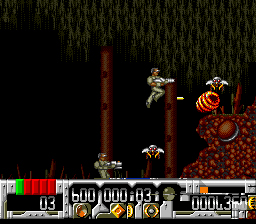 So the game sucks, but at least it’s true to the movie. Granted, I haven’t actually seen the movie since I was about 13, but if I remember right the plotline of the movie was that Van Damme was some super soldier from the future sent to shoot submachine guns at bees (above), right? 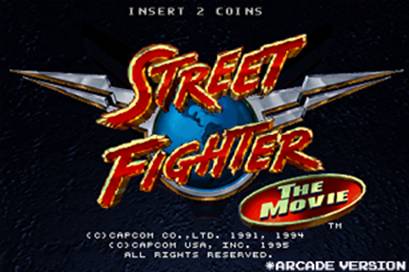 Oh, poor Raul Julia. You crawl your way up from being the star of a Mystery Science Theater 3000 crap movie Overdrawn at the Memory Bank to being a reasonably respected actor, only to die right after playing M. Bison in a videogame based Van Damme film. Ouch. 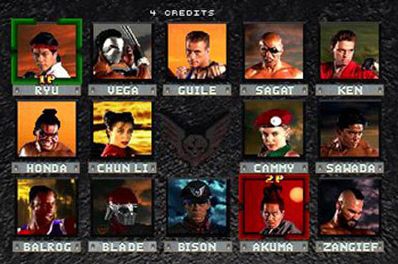 You start out by picking your character out of Jean-Claude Van Damme, Raul Julia, Kylie Minogue and the rest of the cast of nobodies that starred in that god-awful movie.  When the fighting begins, you’ll see that all the moves work the same as they do in the other Street Fighter games. However, fans of the series will also notice that the timing is off and the character animation is choppy garbage, which is something that just doesn’t fly with a fighting game. Combine all that with the fact that the music and sound effects are goofy, and you’ll quickly realize that when the minds behind Street Fighter combine with the minds behind Mortal Kombat, it doesn’t automatically mean they’re going to pump out the greatest fighting game ever made.

Oh, and yes, I’m reviewing the PlayStation version, but you’re seeing screenshots of the arcade version. Why? Because I have no journalistic integrity and am too lazy to take/acquire the right screenshots. 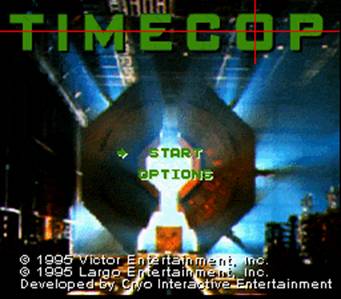 Timecop is a thoughtful drama that documents the mental trauma a man is put through when scientific ethics collide with personal emotions. Oh, and there’s a bunch of explosions, and Van Damme kicks the tar out of a crapload of bad guys. 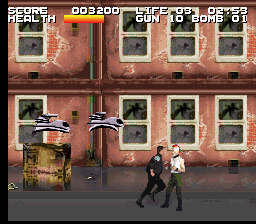 Let’s start on a good note for once: The character sprites in this game are very photorealistic and are some of the better ones I’ve seen on the SNES. OK, that’s out of the way. Now the bad stuff:

The game put all their eggs in one basket: pretty sprites. The rest is worthless garbage.

That’s all I’ve got. Which game will prove itself to be the Frank Dux of this digital kumite?

The top of this muscular heap is:

Street Fighter: The Movie: The Game

It’s a choppy, stupid disappointment for fans of the series, but nothing is more satisfying than having Van Damme bust Kylie Minogue’s lip open once for every time I’ve had to listen to I Believe In You.

If you've just finished reading the latest edition of "Versus Mode," and you're really interested in checking out the Square-canceled fan-made sequal to Chrono Trigger, Chrono Trigger: Crimson Echoe