Pokémon are back yet again, and this time it’s not a shitty pinball game (Pokémon Pinball), a Tetris rip-off (Pokémon Trozei) or a taking-pictures-in-an-Epcot-ride simulation (Pokémon Snap)—it’s actual, honest-to-Christ, hot Pokémon-on-Pokémon RPG action!

I’m not an ultra huge Poké-nerd, but from what I can see very little has changed since the last time I’ve really played anything from the Pokémon series (way back with Pokémon Red). You still have a party of six Pokémon, the Pokémon still have four moves they can learn/use at a time and water still beats fire.

Unfortunately, another thing that hasn’t changed is the in-battle graphics and sound effects. Pokémon battles still essentially look like they do on Game Boy Color. The two battling Pokémon hover above an oval and do battle by spewing some flashy colors at each other in front of a non-descript gradient background, and when you call out new Pokémon they belch out something that sounds like a dying dial-up modem while stiffly moving around like a South Park character.

So yeah, battles aren’t quite up to the DS’s audio/graphical capabilities, but perhaps this is just another step in Nintendo’s new gameplay over graphics direction…or maybe Nintendo just didn’t care because they know they can release a game called “Pokémon Brown“, in which you wipe the shit off of Pikachu’s little, yellow, lightning bolt asshole with your stylus, and it would still sell half-a-zillion copies. 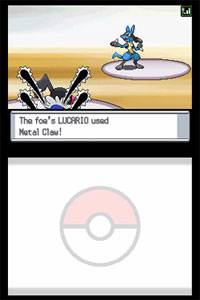 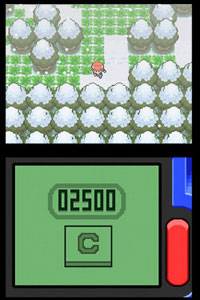 Outside of battles, the game’s graphics are basic but acceptably so, since it’s a pretty by-the-book RPG at its core. Music in the game is much, much better than the Pokémon battle cry sound effects.

If you’re a minigame fan, there’s a few nuggets here for you. Pokémon Contests are back from the Ruby and Sapphire games, and there is a small minigame in which you bake “Poffins” to feed to your Pokémon that help them win contests. To make the Poffins, you simply collect berries and then play a small minigame that plays like a really boring version Cooking Mama.

Also, since it’s a DS game, WiFi battles are also an option in this new installment. But be warned: Since the proliferation of “homebrew devices” like the M3 Simply and the R4DS, it isn’t entirely unlikely you’ll be faced with a battle against someone who has six level 100 legendary Pokémon.

Oh, and here’s some good news: This DS game doesn’t overuse the touchscreen! You can use the touchscreen to choose whether you want to fight, use items, etc., or you can also use the D-pad and buttons—it’s your call. More games should give you the option to do things either way.

When you actually get around to playing the game, you won’t find much out of place. You pick a Pokémon out of three (water, fire, grass), walk through fields of wild Pokémon and fight conveniently-placed Pokémon trainers, go to towns and beat their gym leaders. Getting déjà vu yet? It may be very similar in gameplay to the other Pokémon offerings out there, but sometimes you just shouldn’t mess too much with a well-made franchise. Oh, and as with other such pairings, the difference between Pokémon Diamond and Pokémon Pearl is minimal and consists of a small handful of exclusive Pokémon.

This game’s graphics and audio may not be state-of-the-art, but Pokémon still has the same appeal it always has—it’s a simple, innovative, and fun RPG that has more than a passing resemblance to the official sport of Tijuana: Cockfighting.

2005 was a good year for games. Still, while Shadow of the Colossus and Civilization 4 will undoubtedly keep me busy for a while, I can't help but look forward to the next big game. Fortunately for al