Hey all.  Another month has gone by, and it’s time, once again, for everyone’s favorite adventure game production article/journal/diary/whatever, testgame.exe: Making the Adventure.

Now, those of you who read last month’s article may recall my sudden burst of productivity regarding testgame.  Well, guess what.  No really, guess.  DO IT!

*Throws confetti at you.* 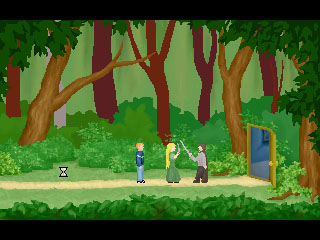 Go ahead and take a look at this month’s list of new things in the game.  You will be astounded. Astounded.  A-stound-ed.  A stoun dead?  Jeez.

Let me just say a few things about what I’ve done with testgame this month before I let you go try it out.  To start with, this month marks a landmark in the game’s progress.  The petition puzzle may now be 2/3 solved.  2/3!  That’s like, almost 3/3, which equals 1!  1…petition, I guess.  Anyway, for a puzzle that I hadn’t even meant to put in the game until it randomly appeared in Amazing Anthony’s dialogue, it’s getting pretty far along.  Maybe by next month we’ll actually be able to get back to the main part of the game.  Then again, what’s an adventure game without puzzles?

Speaking of puzzles, one of the things I’ve been generally pretty happy with—without even really paying attention to it—is the structure and pace of the puzzles in the game.  If I try to think about testgame from a player’s point of view (which is hard to do, I have to admit), I feel like the flow of the game is coming together pretty well.

I tend to see each section of the game (and there will be four of them in total) as containing one overarching puzzle, and, in order to complete it, many smaller puzzles must be solved.  The fact that this ideal actually seems to be playing out in the final product is quite amazing to me.  And, by the way, if that statement makes it sound like this is completely by accident, well, that’s exactly how it feels from my point of view.  Does that make sense?  It’s almost like testgame is its own being, and I really have little control over how it grows.  (How cliché does that sound?)

Of course, I’m not saying that I never plan things in testgame.  Of course I plan things in testgame!  It’s just that sometimes when I’m working on it, I make something up on the spot, and that ends up contributing to the overall balance of the game, rather than me sitting down and saying, “OK, this part of the game is going to be this length and it’s going to have three sub-puzzles and blah blah blah.”  Another way I might explain what I’m thinking is that I don’t like just having puzzles for the sake of having puzzles (and just because adventure games have to have puzzles).  I much prefer coming up with puzzles on the spot when it makes sense to me, as with the petition puzzle.  Hopefully, this results in puzzles that don’t feel forced/contrived.  (Of course, there’s definitely some of that, too.  The locked bedroom door?  I used to have a reason for that, but I’m not quite sure the reason’s there anymore.)

On a completely different note, something that I’ve been trying to work on more recently is creating a sense of continuity between adjacent screens.  For example, I hadn’t noticed until just this month that the front of the castle looked different depending on which of three screens you were looking at it from…. Why didn’t I notice this before?  In any case, this is hopefully fixed now, and this should make for smoother motion from screen to screen.

Also, I am sad to report that, from now on, you will almost certainly not be seeing the high level of productivity on testgame that came out of the past two months.  I blame this on the fact that, come Monday, I will be joining the working world in my first real job.  Well, we’ll just have to see how next month turns out!

And that concludes another (really random) article.  Don’t forget to check out the rest of the ‘Cola and PLAY TESTGAME GOSH DARNIT. 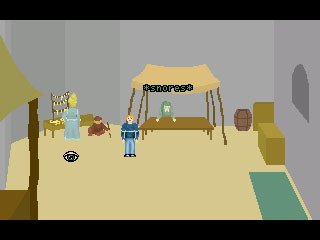 All the graphics and design are by Lizo. The dialogue was written by Lizo, with significant input by Paul. The background music is by Lizo. “Let’s Go Skateboard” is written and performed by The Word Problems.  Adventure Game Studio (the program used to create this game) can be downloaded at http://www.adventuregamestudio.co.uk/

How does one start off a review for what is quite possibly the game of the year? A game that sold 2.7 million units in March of 2008 in the United states to be the number one seller, 2 million more un