Want to know what’s up with that cool-looking game that’s coming out soon? Psychic Thumbs has you covered. (Note: The following are all real games that are really being developed.)

This edition of the Psychic Thumbs is just another expose of the currently sad state of gaming and the direction it’s heading in. I mean, LOOK at these games! How do these ideas ever get far enough to come to fruition! A lesser man truly could not stand the ugliness that is the future. HOWEVER! I brave on for you, THE FAN, so that you may be educated.

The DS has a long and proud history of bringing fans the kinds of games they’ve been begging for. Babysitting Mania is the next in that long, historic line. Sadly, this game is pretty poorly executed. I mean, it actually expects you to watch this kids? This is a major flaw in the developer’s game-making logic! Everyone who is anyone knows that the true joys of babysitting are running up huge phone bills, raiding the fridge, and generally being an obnoxious teenager who lives life carelessly!

Another downside is the total lack of being able to kill or even severely maim children through negligence.

So while the masses out there finally get their treasured babysitting game, it falls WELL short of my expectations.

It’s that time of the every four years again when the country is lit on fire about politics! Well, The Political Machine 2008 is here to put out those flames.

No longer will you need long, pointless, drawn-out debates to prove your political prowess to others; now we have a wonderful new strategy game to settle the score! As absurd as it seems, Political Machine is by far the greatest game of the year so far! Fight your way through all of your political rivals through powerful fundraising, stirring speeches, dirty tricks, and maybe a steel cage death match or two!

The major question being asked about a 50 Cent game sequel was pretty much not if, but when. After blockbuster success the likes of which never before seen in the videogaming world, our hero 50 is taking his gangsta rapping ways and going international on us!

In the continuing effort to make the DS less of a gaming device and more of…uhh…some electronity super device you carry around, I bring to you My Weight Loss Coach. This “game” is designed to work like a pedometer and keep track of various statistics to help you lose weight! FEEL the excitement. I mean, I’m pretty sure you can get all of that in some tiny dollar-store device, but still, this is gonna be amazing! 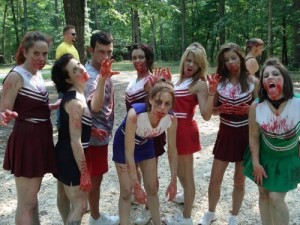 If you’re like most 18-34 males, you’ve had one dream all your life: to be part of an all-star cheer squad. Well men, the time is now.

For so long, our cheering needs have been ignored, and all because we don’t look cute in skirts. Finally, the discrimination has ended! We all may cheer our little hearts out.

Yeah, OK, maybe not. Though I’m sure all the cheerleaders around the globe are secretly hardcore gamers and definitely, at the very least, love all those who play videogames. Oooh man…best game EVA!!

Well, that is the end of another amazing, exciting, unbelievable edition of the ONLY monthly column that can see into the future and bring YOU, the FAN, the freshest opinions…err, um….educated guesses…no, wait.. FACTS about the games you will be playing in the coming months! Whew…really saved that one well! UNTIL next month, where you will once again have your pants literally thrilled off your body by the THUMBS.