Beneath a Steel Sky: Remastered is an iPhone port of a 1994 point-and-click adventure game. I think it’d be easiest to explain this game in good news/bad news format.

Good News: The opening and closing cutscenes, which is new material, are fantastic!

Bad News: Everything between the opening and closing cutscenes is garbage. 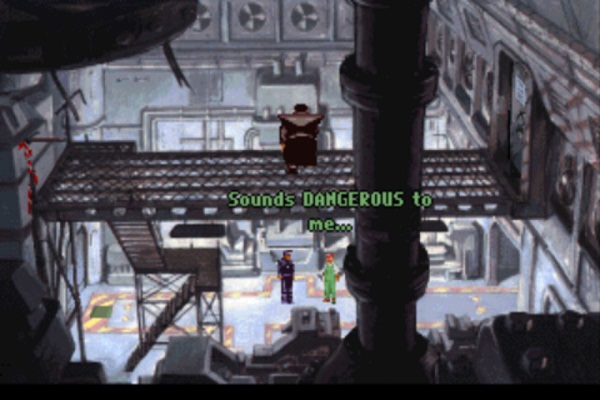 Like most adventure games, Beneath a Steel Sky: Remastered tries to be the funniest game ever. It’s not. The jokes are just plain horrid, and I’m going to spend six paragraphs complaining about the game’s horrible sense of humor, so prepare yourself.

The game suffers from the delusion that if someone says a dirty statement, that automatically makes it a hilarious joke. And of course, that’s not true. Sexual content does not equate to humor; if it did, rape dramas like Law & Order: SVU would be considered comedy. But this game constantly mentions sexual things, as a replacement for actual humor.

None of the dirty jokes are funny. They aren’t even jokes. They’re just sexual statements, trying to pass themselves off as legitimate jokes. It’s annoying, really, and it detracted from the actual plot of the game when every serious conversation was interrupted by a reference to private parts.

Here’s an example of a typical joke. Let’s say the main character goes into a hospital. Here is the conversation that would ensue:

Main Character: Is this a hospital?
Doctor: Yes. I am seeing a client today, who is suffering from breast cancer. 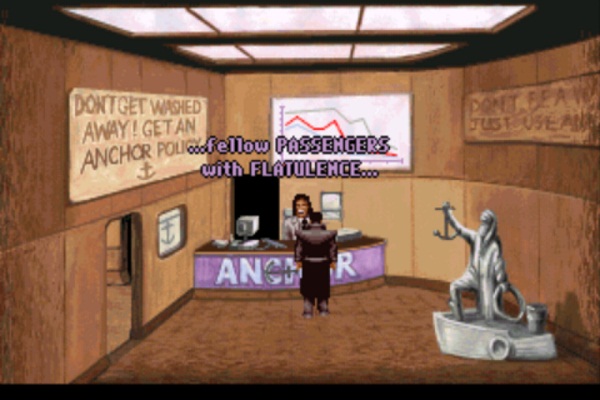 A sample of the game’s humor.

Well, now that I’ve finished talking about the game’s poor sense of humor–no, wait. I’ve got more to complain about.

I have to make special mention of Joey, the robot sidekick. Joey is an insult comic, and everything he says is either dirty or degrading. He has comedic potential, but the voice actor who plays him is as serious as a heart attack. So when Joey jokingly says something like, “I hate you, and I want to kill you,” it doesn’t come off as funny. It comes off as legitimately frightening.

No, seriously. I was afraid of the comedic relief in this game. If I was the main character, I would deactivate that robot before it made good on its threats to kill me.

The other thing I disliked about Joey was the fact that he moved ridiculously slow. Joey follows the main character everywhere, but he is so slow that he is always three screens behind you, and you have to wait twenty seconds for him to catch up. The main character moves at the same slow speed when examining objects; it usually takes about five to ten seconds for him to walk across the screen and examine an object. Maybe the game’s speed was impressive in 1994, but today it comes across as ridiculously antiquated and slightly frustrating. 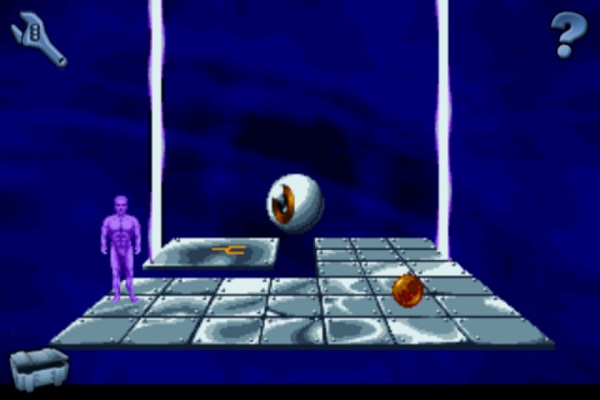 Pictured Above: The worst part of the game.

The plot of the game is, believe it or not, actually good. It’s a bit rushed at times, but the storyline is solid. It’s set in a futuristic world, where computers and capitalism rule Australia. It’s just a shame that the good plot has to be bogged down by poor attempts at humor.

The iPhone controls are…tricky. You’d think point-and-click games would translate easily to touchscreens, but that’s not always the case. With this game, you don’t tap on items you want to interact with. Instead, you have to tap on an area one centimeter above the item you want to interact with. That’s because the game wants to give you the option of either interacting with an object or looking at it. It’s a good system in theory, but it takes some getting used to, and if you’re in an area where many objects are close together, the system is almost impossible to work without resorting to pixel hunting. It is also very hard to use on puzzles where you need to use items on moving targets.

The puzzles are…they’re all right, I suppose. The two puzzles with the dog are rather nice ones. However, there are places where the pacing of the puzzles if poorly done. For example, at one point, there are five puzzles in a row where the solution is “use the crowbar.” There’s another point where a “talk to the character five times in a row” puzzle is used twice in a row. The game would be improved if the similar puzzles were not put back-to-back-to-back.

The game’s built-in hint system, one of the few new features in this port, is fantastic. It works just like the UHS website, which gives you step-by-step hints onto how to solve every puzzle. There’s no penalty for using it, so I just spammed it to get through most of the game. 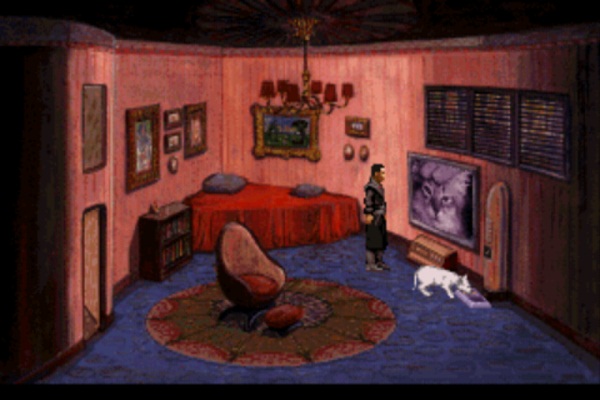 In conclusion, BS Remastered is a bad game. I feel kind of bad for it, because I can see the good adventure game inside it, just waiting to get out. For example, the graphics are really good, and the animation quality looks perfect! But all the goodness of the game is trapped by a plethora of humorless jokes which make the gameplay unenjoyable.

As a port…well, the controls could be improved, and the game speed could be dramatically increased. No one is going to be tricked into thinking this is a modern game. It feels like an older game that was made before game developers knew what they were doing.

The voice acting wavers between good and horrific; there is RANDOM CAPITALIZATION in almost every sentence, and I can’t FIGURE OUT why because none OF THE voice actors emphasize any of the capitalized WORDS. The original game had no voice acting? That was added afterwards? Yes, I can totally see that now.

No, wait, there is video footage of cute kittens in this game. I’m going to bump up the score a little, just for that.

You know how I keep talking on the ol' GameCola Podcast about how I plan to start writing my own column here on the ‘Cola? Welp, here it is! This is "Things Zach Rich Demands to See Before He Dies