Whenever my wife and I are trying to think of where to spend our next vacation together, our knee-jerk instinct is to say “OMG, LET’S GO TO DISNEY!” It’s where we had our first date and spent our honeymoon, and we both think it’s pretty awesome. Honestly, the place is really and truly magical—how else can you explain the fact that it makes me want to spend every vacation I have in a godforsaken, humid peninsula filled with alligator-infested swampland and hicks? But ever since we had our kid, Max, one of us will always rationalize “No, we’re probably going to spend every vacation we have at Disney World once Max is a bit older, so we should go other places while he’s still young enough that we can dump him with my parents and enjoy our lives again.” 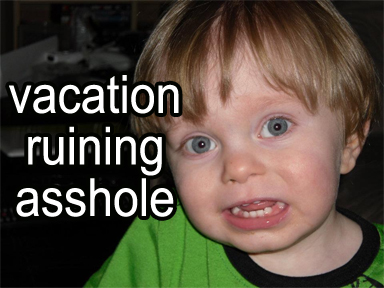 So, that’s what we’ve been doing. One of our most recent vacations was to Atlantic City. We didn’t buy one of those $20 Frommer’s Guide to Atlantic City-type books, but I like to believe that if we did, and they actually wrote something in it that would make the book worth $20, it would have said in 300-point bold Impact font “FOR THE LOVE OF JESUS CHRIST, DO NOT GO TO ATLANTIC CITY! THAT PLACE IS A BLIGHT UPON THIS PLANET!” After visiting that place, I now know why there are so many alternate versions of Monopoly—because nothing that invokes Atlantic City can be properly considered to be enjoyable escapism. I drove down Ventnor Avenue and, let me tell you, if a row of crack dens and filthy empty lots of dirt and garbage is what you consider to be yellow property, I can only assume that Baltic Avenue is nothing but geysers of raw sewage and dead babies hanging on clotheslines.

In fact, Atlantic City is so disgusting that—wait, what was I talking about? I was introducing a Heap, wasn’t I? OK, this Heap’s about games that are set in real-life theme parks. No, I don’t know how I started talking about Atlantic City, either.

Oh, one more thing: I have my very first special guest on “Top of the Heap” this time. I don’t want to give away who this very special guest is, but let’s just say he’s associated with the Monkey Island series of games.

Adventures in the Magic Kingdom (NES) 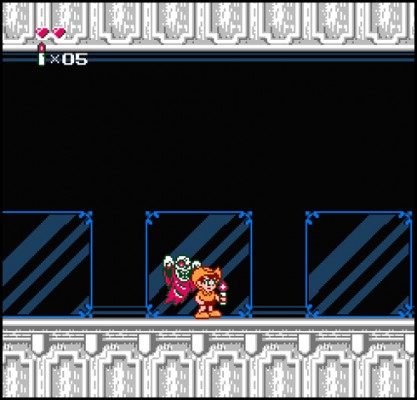 Adventures in the Magic Kingdom masterfully takes all the fun and whimsy of an actual trip to Walt Disney World, and completely ignores it, instead offering a small handful of minigames that are vaguely related to the rides they’re named for.

Autopia – A race with pits and bridges and jumps. If you fall, you start it all over.
Big Thunder Mountain – An exercise in pure memorization and trial-and-error. Pick a track; if you pick the wrong one, you die. Fun!
Haunted Mansion – A short platformer where you jump around throwing candles at ghosts.
Pirates of the Caribbean – Another short platformer, except that this time you have no means with which to protect yourself.  Helplessness is fun!
Space Mountain – It’s essentially Sewer Shark in space.
Trivia – A bunch of asshole kids refuse to give you a key that Mickey Mouse himself commissioned you to collect until you run around the park like a schmuck answering obscure Disney trivia.

Nothing in Adventures in the Magic Kingdom is grossly un-fun, but there’s nothing memorable here, either. The whole game just feels like the janitor at the videogame factory swept the scraps that didn’t make it into the other games off the floor, and decided to stitch them together to form his own game, slapping Disney’s name on it so it would sell. 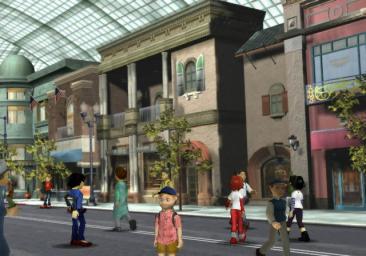 Universal Studios Theme Park Adventure writes the player a big fat awesome check by starting the opening cutscene by showing the iconic time-travelling Delorean flying through time and space, only to immediately rip that check up and urinate on the remains by cutting to a shot of Woody Woodpecker in the driver’s seat. If that’s not bad enough, you know you’re really in trouble when the next screen is Universal Studios personally assuring you that “This game is not a true representation of the park, it is only an interactive game.” Translation: “We swear, our park doesn’t suck this bad. Please still try to fit our park into your Disney-filled schedule next time you visit Orlando.”

The game starts you out at the front gates of Universal Studios, leaving you to walk through the park, navigating through crowds of people to get to the attractions. Woody Woodpecker kind of acts as your guide, and allows admission to the attractions, all of which are represented by mindnumbingly boring minigames that appear to have been made for small children. Fine, it’s not fun for adults; maybe it’s fun for children. The odd thing about the game is that, even though the minigames seem very much geared toward small children, navigating the park is frustrating enough to make an adult just stop playing, let alone a child. Also, with questions like “Who directed ‘Two Mules For Sister Sara’?” the Universal Studios trivia probably won’t appeal to the youngsters, either. But at least they’re able to meet such culturally relevant characters as Chilly Willy. 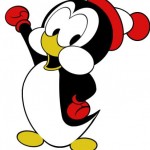 Yeah, OK, this game sucks for kids, too.

Our special guest is still coming up. Don’t know who it is? Need another hint? Well, he very recently saw some activity over at Kickstarter. I’ll drop one more hint before we get to him. In the meantime… It’s almost as if the developers of Shamu’s Deep Sea Adventure had a checklist of tired kids’ game tropes that they went through before releasing the game. Lengthy tutorial mode: check. Collect an arbitrary number of items to proceed to the next level: check. Non-violent defenses: check.

Once you’ve finished the tutorial, you can then try to outrun the Kraken and collect his Kraken Krystals (Yes, Krystal, like the stripper name). After you’ve finished that, you can swim through a level collecting even more krystals and occasionally collecting keys to open incredibly simple sliding puzzle doors. Repeat these level types over and over, and you’ve got the entire game.

“Yeah, so it’s not very fun,” you may think, “but at least it’s educational.”

Nope. Amazingly enough, it turns out that Krakens and Poseidon never existed (sorry, cryptozoologists and Greek pagans). Also, several years ago I saw a show on Discovery Channel (before it became terrible and stupid. I’m looking at you, Finding Bigfoot) about Orca Whales, and it didn’t even mention once that they needed to pick up purple crystals in order to survive. Beside that, your main food source in this game is krill, and if I may briefly let out my inner science nerd, Orca Whales are toothed whales and do not generally eat krill, mainly living on a diet of fish, penguin and seals. Krill is eaten by baleen whales like the Blue Whale or Humpback Whale. VOYAGE OF THE MIMI FOR THE WIN, MOTHERFUCKER!

Almost time for our special guest. One final hint—he’s currently working on a brand-new adventure game. 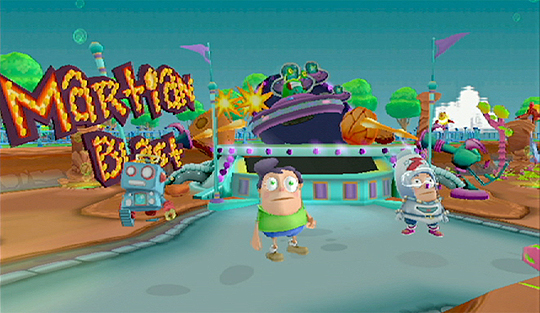 Imagine, if you will, a carnival-like atmosphere crammed with wall-to-wall poorly dressed, morbidly obese children with Down’s syndrome. No, you aren’t at an Insane Clown Posse concert; you’re playing Six Flags: Fun Park—a game whose art director aimed for Psychonauts, but ended up getting Easter Seals.

The crux of the game seems to be that some games cost coins and give tickets, some cost tickets and give coins, and you just keep playing whatever crap you can with the winnings from the last game. There might be more to the story but frankly, I avoided it, because what kind of compelling narrative could a game about going on theme park rides and occasionally picking up stray trash possibly have?

This seems like it was going to be just another party game before they got the Six Flags license, because in the time I played it, I didn’t see anything Six Flags-related outside of the logo occasionally being plastered on things.

Though, the saddest thing for me is that this ugly-looking game in which all the characters look mentally challenged gives you the option of choosing what is possibly the closest match to my own real-life hairstyle that I’ve seen in a videogame for your custom character. That’s so very depressing. I have to reevaluate a lot of things in my life now.

And now, finally, I’d like to introduce my special guest: a man who really likes the Monkey Island games, who recently utilized Kickstarter to pledge some money for Gridiron Heroes, and who is currently working on his new adventure game, Life in the Dorms—GameCola’s Editor-in-Chief, our very own Paul Franzen. 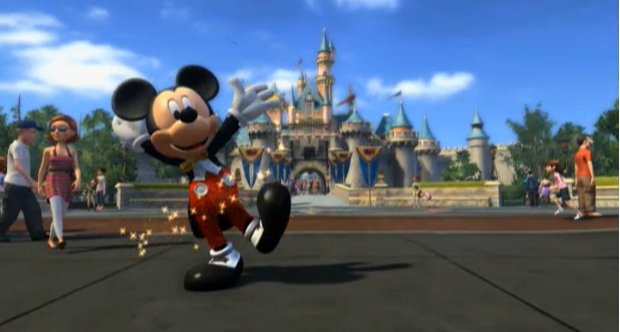 First of all, I would like to thank Christian Porter for allowing me this platform to talk with you about how Kinect Disneyland Adventures is the worst thing to ever happen to videogames, Walt Disney theme parks, and myself personally.

As a closet Disneyphile, there was nothing in all of 2011 I was looking forward to more than this game’s release, and I include in that statement my own wedding. That’s why it was so painful to me that this game in no way replicates the experience of actually going to a Disney park. It’s not even as fun as watching a free “Plan Your Vacation Now!” DVD. The Pirates of the Caribbean minigame is just you, in a boat, hitting alligators with oars; the It’s a Small World minigame is just dancing. Just dancing. The one interesting and authentic part about the game is exploring the park itself, and it screws even that up by forcing you to awkwardly hurl your arms out in front of you in order to move.

Perhaps the most exciting part of Kinect Disneyland Adventures, though, is “adventure mode,” which gives you great quests like “find all the spoons,” and then makes them really challenging by showing you exactly where all the spoons are. I think this picture, taken with the Kinect camera during actual Disneyland gameplay, sums up my experience the best: 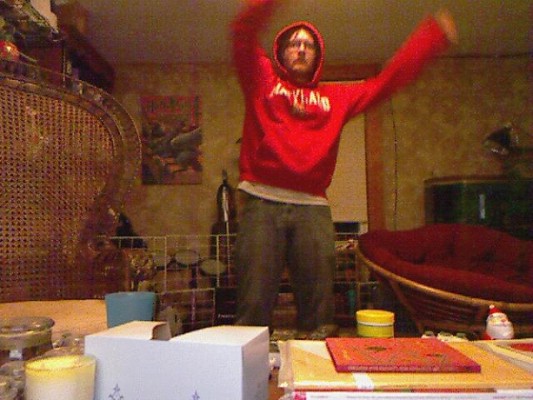 Is that not the face of pure joy?

Poor Paul. You see that tissue box in the foreground? It was full before I made him play that game. So many tears.

Sadly, Dollywood and Gatorland don’t have their own videogames, so this is where the Heap ends. 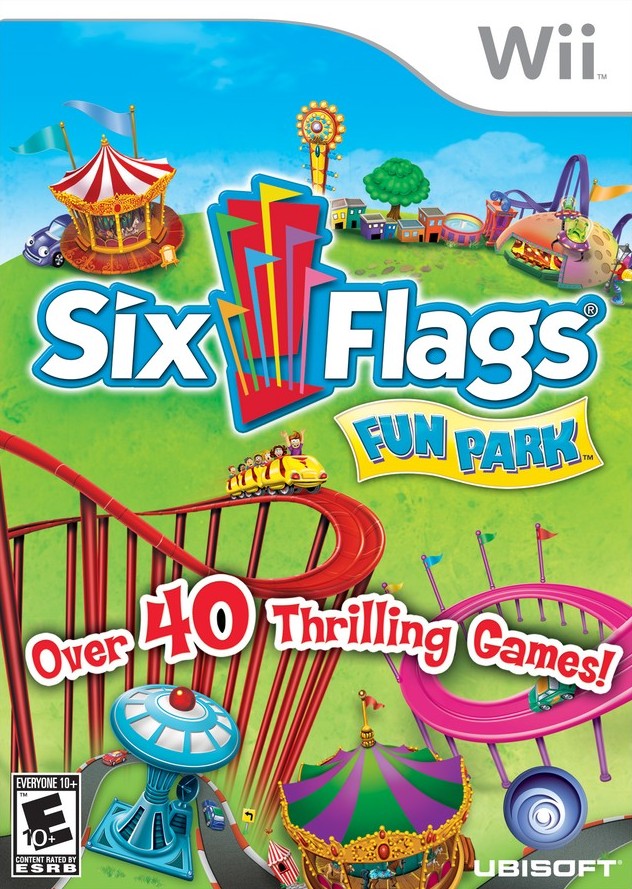 Up until the last second of writing this, I kind of thought I’d be naming Adventures in the Magic Kingdom as Top of this Heap due to nostalgia. I used to play it a lot when I was a kid. But, I really analyzed the games, and Six Flags seems to give more bounce to the ounce. Sure, Adventures in the Magic Kingdom and Six Flags: Fun Park are both compilations of mediocre minigames, but hell, at least Six Flags has forty of them. It’s nice to know that if I ever lose absolutely every other game I own, I can always fall back on Six Flags and its 40+ sub-par minigames in my hour of need. Thankfully, that will probably never happen, so I can continue on playing good games.

According to The Smithsonian Institute, the answer is a resounding YES!Hello, this is Mark Freedman, reporting live above Washington D.C. aboard News Chopper 64. A new exhibit is coming to the Smithso