And now, an artistic rendering of testgame:

(I think I have a future in graphic art. Oh yes.) 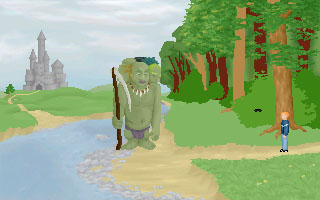 All the graphics and design are by Lizo. The dialogue was written by Lizo, with significant input by Paul. The background music is by Lizo. “Let’s Go Skateboard” is written and performed by The Word Problems.  Adventure Game Studio (the program used to create this game) can be downloaded at http://www.adventuregamestudio.co.uk/

The crew gets lost because this forest was a lot easier to navigate in the actual game.